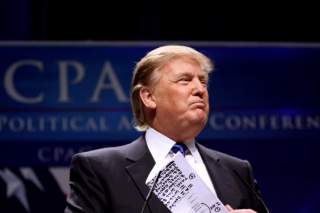 In addition to the threats of a resurgent Russia to the east, and extremism and migrant flows from across the Mediterranean to the south, another specter looms over the upcoming NATO summit in Warsaw—Donald Trump’s shadow. For the first time since the 1950s, a presidential candidate of a major U.S. political party is questioning NATO's utility and whether or not it enhances American security. Moreover, Trump seems to suggest that he is open to reaching a nineteenth-century-style bargain with Vladimir Putin that would define Western and Russian spheres of influence in the east of Europe, not unlike the secret meeting between Churchill and Stalin in 1944.

Current administration officials and members of the U.S. foreign policy community are trying to soothe their European colleagues by reassuring them that Trump has no chance to prevail in the November elections. Meanwhile, House Republicans have prepared a document they hope Trump will read and take to heart. The document recommends United States to increase its security cooperation with countries along the Russian periphery. The message is meant to reassure European allies that there will be no fundamental change in the transatlantic relationship. However, this approach may be a mistaken one.

The Electoral College map certainly looks unfavorable for Trump. But it is worth remembering that at this point in the election cycles in 1980 and 1992, respectively, the incumbent presidents were expected to win reelection against candidates that European elites distrusted. In Ronald Reagan’s case, he was dubbed a "reactionary cowboy actor," and in Bill Clinton was known as a "provincial backwater governor." Presidents Jimmy Carter or George H. W. Bush did not enjoy second terms, particularly because of events and developments that changed expectations right before the election. Because so many of the rules have been thrown out the window during this year’s election cycle, it does not serve our European colleagues to reassure them that there is no chance of a Trump administration being seated in January 2017. Even if Trump loses, he has already broken political taboos such as about never mentioning leaving NATO. Trump’s criticisms may continue to animate U.S. domestic politics, even if foreign policy is being run by a Clinton administration.

There may be a silver lining here: fear of Trump might be a useful bargaining chip into getting allies to change long-established patterns. Every post–Cold War president and secretary of defense has bemoaned that Europeans do not spend enough on collective defense. Even when some NATO members do increase their defense budgets, it is usually for parochial domestic reasons, not to add more capability to the collective alliance toolbox. During his final months in office, Defense Secretary Robert Gates warned the Europeans that if they did not do more to support the alliance, the consequences would be dire.

Europeans have been hearing these complaints for years—and tuning them out. So what if many countries consistently fail to meet even the minimal two percent of GDP standard for defense spending? Who cares if more expeditionary capability is cut? What was the United States going to do about it, leave the alliance? That was the crazy talk of a few isolationists or the subject of a Pat Buchanan column, not the policy position of any serious figure contending for the presidency.

Trump is not running with reams of policy papers at his disposal. Yet, if we take his speeches and statements at face value, he does have an ideological compass when it comes to foreign policy.  Alexander Ward identified two themes animating Trump's comments at a recent Project for the Study of the 21st Century event devoted to comparing and contrasting the Trump and Hillary Clinton perspectives on America's role in the world. The first is that a President Trump would be prepared to "recalibrate America's role in the world unilaterally." The second is that Trump believes that it is possible to "make a better deal for America, and shed the current commitments that are 'stupid.'"

It is safe to say that Trump does not share the views expressed by former Polish foreign minister Radek Sikorski, who sees the NATO alliance as the armed guarantor and defender of Western civilization. Trump has a more mercantilist, transactional, and utilitarian view of American commitments: does it bring immediate profit to the United States? How is U.S. homeland security enhanced by continued participation (and underwriting) of the alliance? European reluctance to make major increases, even in light of the Putin challenge, plays directly into a narrative that says the United States subsidizes the defense of other states who use the savings to subsidize their domestic economies and welfare systems—and then embroils the United States in conflicts that it would otherwise not involve itself.

So it may better serve the United States’ interests to emphasize fear rather than reassurance in Warsaw next month: that the Europeans need to do more now—not simply in spending but in what they are prepared to buy and train for—to show a greater willingness to bear the burdens of the alliance. Isn't it better to make commitments now to a friendly Obama administration, rather than waiting for the possibility of dealing with a Trump team?

Nikolas K. Gvosdev, a contributing editor at the National Interest, is the incoming Jerome E. Levy Chair of Economic Geography and National Security at the U.S. Naval War College. He is also a non-residential senior fellow in the Eurasia Program at the Foreign Policy Research Institute. The views expressed are his own.