How the Neocons Outfoxed Colin Powell 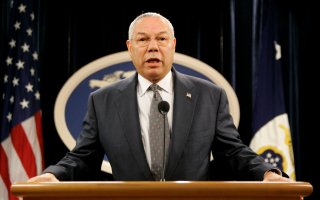 When I met Colin Powell, who has died at age 84, at the State Department as part of a Los Angeles Times editorial board visit with various George W. Bush administration officials during the run-up to the Iraq War, he exuded confidence about his ability to get the United Nations to sign off on a resolution backing a prospective attack. He was, of course, wrong. After he appeared at the UN in February 2003 earnestly touting bogus information about Saddam Hussein’s weapons of mass destruction, he became as inculpated in the Iraq imbroglio as the neocons who had outflanked him to promote it. “There can be no doubt,” Powell warned, “that Saddam Hussein has biological weapons and the capability to rapidly produce more, many more.”

No more parades for Powell? While the incident was definitely a “blot,” as Powell put it, or worse, he is receiving numerous plaudits for his lengthy government service. Defense Secretary Lloyd Austin stated that “the world lost one of the greatest leaders.” As the son of Jamaican parents, Powell, who grew up in the South Bronx and served in Vietnam, became a living symbol of the American immigrant dream. He rapidly rose in the military, serving as a senior military adviser to Ronald Reagan’s Defense Secretary, Caspar Weinberger. Weinberg, who enunciated in 1984 what became known as the Weinberger Doctrine advocating limits on the use of American troops abroad, seems to have left an intellectual imprint on Powell. Later, Powell would set out a so-called Powell Doctrine that called for using overwhelming force against adversaries from the outset. It condemned “half-measures and confused objectives.” The basic idea was simple: no more Vietnams.

Powell’s aversion to another Vietnam meant that he opposed the use of force against Saddam in 1990 after the despot invaded Kuwait. But as chairman of the Joint Chiefs of Staff, he worked closely with Dick Cheney, who was George H.W. Bush’s Defense Secretary, to ensure that his precepts were enacted. Overwhelming force prevailed. Saddam was defeated but not ousted, as Bush prudently decided not to go to Baghdad, despite the Wall Street Journal editorial page’s exhortations that it was time to make Gen. H. Norman Schwarzkopf, who commanded Operation Desert Storm, the “viceroy of Baghdad.”

Powell himself became something of a national hero. But the neocons never relented. During the 1990s they aligned themselves with the Iraqi exile leader Ahmed Chalabi and made the case for war with Iraq. When Powell became Secretary of State in the George W. Bush administration, however, his relationship with Cheney didn’t fray. It unraveled. Powell, as James Mann shows in his book about the two men, lacked the cojones to tell Bush he wouldn’t support an invasion of Iraq. Instead, he became implicated in a conflict that, in his heart of hearts, he knew was unmerited.

Powell, who declined to run for the presidency, had one final act left. He had never displayed the kind of political and bureaucratic dexterity that Cheney possessed. But the rise of the Trump presidency prompted him, like not a few military professionals, to wade into national politics, declaring in 2016 that Trump was “a national disgrace and an international pariah.” Then, in 2020, he spoke in support of Joe Biden at the 2020 Democratic National Convention.

In essence, Powell was a member in good standing of the Republican establishment, a mandarin class whose decline was accelerated by its very embrace of the Iraq War. It was the response to 9/11, as Spencer Ackerman shows in his new book, that helped set the stage for Trump’s ascendancy in the GOP. Powell was the good soldier. But his legacy will be marked as much by what he did not do as by what he did.