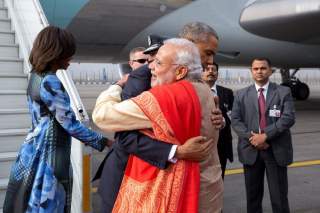 DESPITE HIS initial reservations about the merits of close relations with India, President Obama appears to be ending his second term on a high note. The Obama administration invited Prime Minister Modi to address a joint session of Congress, eager to portray the occasion as an opportunity to consolidate bilateral relations. Indeed, this dramatic shift in President Obama’s foreign-policy priorities stems from the assessment of three components of American national interests and India’s role in their achievement: build strong bilateral security and defense cooperation, make India an important export market for U.S. goods and services, and situate India in the strategic pivot to Asia. But a close analysis of American foreign policy toward India shows mixed results. President Obama has succeeded in substantially strengthening existing defense ties, but has had far less success in accelerating U.S. exports to India. This seriously undercuts his goal of advancing American economic interest. President Obama has failed to fully convince India of the American commitment to the Asia pivot strategy. India’s regional concerns over territorial defense from neighbors, coupled with America’s allocation of insufficient resources, contribute to its ambivalence about the pivot.

President Obama’s dramatic shift in foreign policy toward India—from a lukewarm attitude to a strong embrace—appears to have elevated the bilateral relationship to a high priority for the United States. These shifts are important because as a self-professed realist, President Obama focuses on securing America’s core national interests. He has not hesitated to question the relevance of U.S. friends and enemies in the pursuit of those interests. In fact, Obama did not support the U.S. strategic partnership with India under the George W. Bush administration. He has, however, dramatically shifted his policy priorities to build closer relations with India. President Obama describes the U.S.-India relationship as one of the defining partnerships of the twenty-first century, guided by convergent national interests.

THE FIRST element President Obama considers vital to American interests concerns building closer security and defense cooperation. Cooperation between the two countries has improved dramatically over the past decade. India conducts more annual military exercises with the United States than any other country. In 2015–16 alone, for example, Washington and Delhi conducted several bilateral and multilateral military exercises. In October 2015, both navies participated in Exercise Malabar. The United States and India also conducted army exercises in September 2015 known as “Yudh Abhyas.” In addition, the United States participated in the International Fleet Review of the Indian navy in February 2016. India joined “Red Flag” in Alaska, a multilateral air force exercise, in April–May 2016. In June–July 2016, India will participate in the Rim of the Pacific (RIMPAC) naval exercises, hosted by the U.S. Navy.

Of course, the U.S.-India defense relationship also depends on the sale of military equipment. India now constitutes the second-largest arms market for the U.S. defense industry, after Saudi Arabia. Sales have totaled nearly $17 billion in the past five years. Between 2011 and 2014, American arms sales to India exceeded $13.9 billion. India signed another contract in 2015 valued at $3 billion. The big-ticket items sold to India included the Boeing P-8I Neptune (a version of the U.S. Navy’s P-8 Poseidon antisubmarine aircraft), the Boeing C-17 Globemaster III transport aircraft and the Lockheed Martin C-130J Super Hercules medium cargo transport. Apache attack helicopters and Chinook cargo helicopters also made the list. In fact, the Indian market for U.S. defense products may expand considerably as India takes a second look at the Boeing F/A-18 Super Hornet. The deal has the potential of ushering in a qualitatively different relationship, one not of buyer and seller but of coproducers.

This defense engagement between the United States and India is also growing in complexity and sophistication. Both countries are actively exploring ways to jointly develop and produce joint military projects—for example, research and development of mobile electric hybrid power sources and next-generation protective body suits. These joint ventures have been admittedly of low value so far, but both countries are moving to develop more sensitive technologies. These technologies include jet engine and aircraft carrier design. The recent signing in principle of the Logistics Exchange Memorandum of Agreement (LEMOA) for sharing American and Indian facilities for refueling, supplies and spare parts is an important indicator of growing defense cooperation. The creation of the India Rapid Reaction Cell in the Pentagon is the first country-specific cell of its kind and simplifies defense collaboration.

Despite significant progress, the United States faces two challenges in developing deeper defense relations with India. First, India continues to be suspicious of American motivations to draw Delhi into a broader, U.S.-dominated coalition. This suspicion is rooted in the moribund ideology of Non-Alignment as well as in its colonial experience, and drives India’s refusal to sign what the United States calls “foundational agreements” to further strengthen military cooperation. These include the Communications and Information Security Memorandum Agreement (CISMOA), Basic Exchange and Cooperation Agreement (BECA) and LEMOA. In fact, the United States has been urging India for over a decade to sign these agreements in order to improve ease of communication and better logistical support for each other’s military.

India decided in principle this April to sign one of the three foundational agreements. Although LEMOA is a watered down version of what the U.S. has been asking for, the agreement allows the two militaries to use each other’s land, air and naval bases for resupply and refueling. India was eager to point out that this agreement does not apply to troops stationed on Indian territory and that the logistical support would be considered on a case-by-case basis. This is precisely where defense cooperation has reached its limits.

Second, codevelopment and coproduction of military equipment with the United States certainly appeals to India, but hurdles remain. India has a history of signing ambitious defense cooperation agreements only to see them fall apart. Corruption scandals, bureaucratic inertia and missed deadlines are common spoilers. The recent deal to purchase the French Rafale multirole combat fighter is a case in point. Although the agreement was signed in 2011, India has been engaged in protracted negotiations to lower the cost of the deal and appears to be reducing the fighter count from 126 to thirty-six. More to the point, there is no reason to believe that codevelopment and coproduction with the United States will not face some of these challenges. India’s own attempts at developing indigenous military technology do not offer many examples of success. Take the example of the Light Combat Aircraft (LCA), the development of which was conceived in the mid-1980s and and is still incomplete. Rechristened now as the Tejas, India had to sign an agreement with General Electric to manufacture and supply engines for the LCA.

Two challenges have hobbled President Obama’s pursuit of U.S. economic cooperation with India. First, although a large number of economic complementarities exist between the two, India’s potential as an important trading partner of the United States is undermined by significant political obstacles. Small but influential pockets of political groups are against forming closer ties with the United States. Although the influence of these groups has periodically waxed and waned, they oppose India’s entry into any U.S.-led formal trading arrangements, such as the Trans-Pacific Partnership. In fact, the Obama administration has devoted tremendous energy and time to expand economic and trade ties with Asian countries. India should not be left behind. Missing trade deals would perpetuate India’s middle-income trap.

Second, the trade deficit in goods and services between the two countries heavily favors India over than the United States. This trade deficit grew from $7 billion in 2009 to $25 billion in 2012 and stood at nearly $30 billion in 2015. This more than fourfold increase may not be much in absolute terms, particularly compared to China and Germany’s much higher deficits with the United States, but India has yet to make the list of top ten American export markets. Perhaps for this reason, President Obama announced plans to increase this trade volume over a five-year period from $107 to $500 billion. Undoubtedly, this is an ambitious target, but it also indicates the potential for American businesses in India.