How Pakistan Is Tightening Its Grip on the Taliban 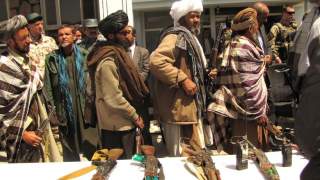 The Taliban is in transition. Its leadership council in Quetta—in Pakistan’s Balochistan province—announced recently that Mullah Akhtar Mansour would replace Mullah Mohammed Omar as the leader of the insurgent movement.

The appointment of Mullah Mansour to head the Taliban is an opportunity for Pakistan to solidify its control over the organization and finally help bring about a genuine reconciliation process in Afghanistan.

The announcement of Mullah Omar’s death and the decision about his replacement has major implications for U.S. national security and the future of global terrorism trends. Pakistan has long played a deceptive role with regard to its relationship with the Taliban. Yet it has avoided any international reprimand for its duplicity.

Many would argue that there’s little reason to trust the Pakistani military establishment to facilitate efforts to stabilize Afghanistan, given its long history of supporting the Taliban. But there are tentative signs that the rise of ISIS in the region and Afghan President Ashraf Ghani’s robust efforts to mend fences with Islamabad are leading Pakistan to recalibrate its policies.

ISIS is reportedly establishing bases in Kunar and Nangarhar provinces of Afghanistan and has been recruiting from the Tehrik-e-Taliban Pakistan (TTP, Pakistani Taliban), which has been battling the Pakistani state for the last eight years. Several TTP leaders have pledged support for ISIS leader Abu Bakr al-Baghdadi and adopted the ISIS ideology. On July 7, a U.S. drone strike in Nangarhar province killed more than two dozen ISIS fighters, including Shahidullah Shahid, former spokesman for the Pakistani Taliban, who defected to ISIS ranks last year.

Pakistan has been conducting military operations to flush out TTP bases in North Waziristan over the last year. These operations intensified following the TTP’s horrific massacre at a military school in Peshawar last December that killed over 130 school children.

It is not only Pakistani leaders who are worried about increasing ISIS influence in the region. When ISIS began its forays into South Asia last year, Al Qaeda leader Ayman al-Zawahiri released an hour-long video announcing the launch of a South Asia wing of Al Qaeda called Qaedat al-Jihad in the Indian Subcontinent (AQIS). In that video, Zawahiri reaffirmed his allegiance to Mullah Omar, showing the importance of Omar as a unifying and inspirational figure for both Al Qaeda and the Taliban.

Another sign that Pakistan is consolidating its influence over the Afghan insurgency is the appointment of Sirajuddin Haqqani as Mansour’s deputy. Sirajuddin, son of well-known Afghan militant leader Jalaluddin Haqqani, has in recent years taken operational control of the Haqqani network, which former U.S. Chairman of the Joints Chiefs of Staff Admiral Michael Mullen once referred to as a “veritable arm of Pakistani intelligence.”

The Haqqani network has been a major facilitator of the Taliban insurgency in Afghanistan, and has been responsible for some of the fiercest attacks against U.S. and coalition forces, including a suicide attack on a CIA base in Khost Province in December 2009 and a multi-hour siege of the U.S. embassy in Kabul in September 2011.

Pakistani media reported last week that Jalaluddin died over a year ago from a brain hemorrhage, although his family and the Taliban denied the reports. If true, this would be yet another blow to the Taliban insurgency and create vulnerabilities for the movement, particularly in eastern Afghanistan, where Jalaluddin was most influential.

Despite some official denials, it is widely accepted that Pakistani intelligence has known about the death of Mullah Omar since it occurred apparently over two years ago. Their efforts to keep the news under wraps for so long demonstrates their nervousness about the potential disarray it would cause within the movement. The fact that Pakistan withheld such critical information from the United States is yet another indicator of the double-dealing the United States has tolerated from one of its largest aid recipients.

So why might Washington find any solace now with Pakistan consolidating control over the Taliban? Because it’s possible that Islamabad wants to head off any further ISIS encroachment in the region and calculates that establishing a working relationship with the Afghan government and its western backers offers the best chance to do so.

In what was viewed as a first step by Islamabad to use its influence with the Taliban leadership to facilitate Afghan reconciliation, Pakistan hosted the first round of official talks between Taliban leaders and the Afghan government on July 7 in Murree, Pakistan. A second round of dialogue was postponed after news of Mullah Omar’s death broke.

The question is whether peace talks will resume once the dust settles over the Taliban leadership transition. This largely depends on Pakistan. Islamabad has long used the argument that it has little leverage over the Taliban as an excuse to avoid getting embroiled in a peace process. It is no secret that Pakistan has viewed the Taliban as a way to assert its influence in the region and keep India off balance.

In the changing circumstances, however, Pakistan may calculate that the most effective way to beat back the ISIS threat is to improve relations with the Afghan government through a reconciliation process.

If Pakistan is serious about encouraging reconciliation in Afghanistan, it will have to use its leverage with the new Taliban leadership to halt attacks across the border. A spate of insurgent attacks in Afghanistan over the weekend—including three separate bombings in Kabul on August 7 that left at least fifty dead—has put the talks in jeopardy.

Not only has the cover-up and exposure of Mullah Omar’s death exposed rifts within the Taliban, it has removed the thin veneer of deniability Pakistan has relied on to hide its role in manipulating the group for its own purposes.

The Taliban leadership transition is an opportunity for Pakistan to finally assert its influence on the group and help bring peace to the region. Failure to do so will only mean more chaos and bloodshed for both Afghanistan and Pakistan and the likelihood of a stronger ISIS presence, adding to the violence and instability.

Lisa Curtis is a senior research fellow in the Asian Studies Center at The Heritage Foundation.