How to Play Diplomatic Dodgeball with Bashar al-Assad 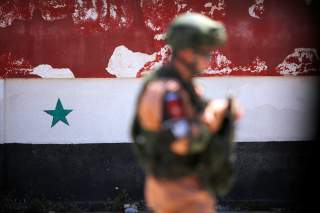 Monday night the White House issued a warning to President Assad that if “Mr. Assad conducts another mass murder attack using chemical weapons, he and his military will pay a heavy price.” U.S. Ambassador to the UN Nikki Haley added that the White House message was also intended for Assad’s Russian and Iranian allies. The warning raises more questions than it answers.

There was initially some question about the intelligence suggesting a new chemical attack was under preparation, and it has not been made public. The Pentagon and White House have, however, confirmed its existence and claimed proper interagency assessments were done, albeit in haste due the apparent imminence of an attack. Those who remember the Tonkin Gulf incident (an alleged attack on a U.S. warships that precipitated enhanced intervention in Vietnam in 1964) may still have doubts.

Why issue a public warning? Diplomatic statements of this sort are more often issued privately, in part to avoid the kind of problem Obama faced after his “red line” chemical weapons statement against Syria in 2012, when a year later it became clear that Congress might not approve military action. In 1992 for example, President George H. W. Bush issued a secret and personal Christmas Day warning to Slobodan Milosevic not to attack Kosovo, one reissued later by President Clinton. Those statements are often credited with holding the Serbian autocrat off for several years.

A public warning may have more weight, if only because it brings into the equation the Obama example and the issue of U.S. credibility. But the Trump administration warning to Assad was not issued by the president himself but rather by the press secretary, which detracts from what otherwise might have been its diplomatic weight. It was also issued only a few days after a Central Command spokesperson suggested that cooperation with Assad and his allied forces in attacking the Islamic State in eastern Syria would be welcome. Was that a purposeful “carrot” followed by a “stick,” or was it just lack of coordination and consequent confusion?

Precisely what the statement means is open to question. The Syrian regime, short on manpower, allegedly uses small quantities of chemical weapons quite often, including chlorine as well as more deadly substances like sarin. What is the threshold for U.S. action? Is it any use at all, or is it use on a scale that produces mass casualties? In smaller, often ground-based attacks, how can the United States be sure the perpetrators are affiliated with the Syrian regime and not with extremists, who are also believed to have some chemical-weapons capability?

To be effective, U.S. retaliation against Syria for a new chemical attack would presumably need to be more forceful than the April 7 cruise-missile attack President Trump ordered in response to a chemical attack that killed more than seventy Syrians at Khan Sheikhoun. The Americans then used fifty-nine missiles, which put the Syrian air base targeted out of operation for only a few weeks. Would a new retaliatory strike be bigger? More sustained? The naming of Assad in the White House statement raises further questions: would it seek to decapitate the Syrian regime, or strike command and control targets?

Moscow rejected the White House statement, saying the threat was “unacceptable.” The Syrian regime and its Iranian and Russian allies had already issued a statement after the cruise-missile attack threatening a “lethal response” to further U.S. attacks. Would Damascus and its allies attack the United States or U.S. allied forces in Syria currently advancing on the Islamic State’s capital at Raqqa? Or would they retaliate against U.S. forces in southern Syria, which have already clashed with Syrian forces and Iranian-backed militias? Would the United States target Russian or Iranian assets if they were thought to have been complicit in a chemical-weapons launch? Some believe Tehran is the real target of the White House threat.

While President Trump, like his predecessor, has tried to keep American focus in Syria on defeating the Islamic State, a larger strike against the Syrian regime and possibly its allies would risk putting the United States on the slippery slope to wider and deeper military involvement. Even if they are not targeted, that could bring the United States into direct conflict with Iranian or Russian forces. What risks is the administration willing to take? How far is Trump willing to go? With the Republican health-care bill facing failure in the Senate and the White House lawyering up for interviews with Special Counsel Bob Mueller’s team, would President Trump be tempted to shift attention elsewhere?

Daniel Serwer directs the Conflict Management program at the Johns Hopkins School of Advanced International Studies and is a scholar at the Middle East Institute. He tweets @DanielSerwer and blogs at www.peacefare.net.

Image: A Russian soldier stands guard near a Syrian national flag drawn on the wall as rebel fighters and their families evacuate the besieged Waer district in the central Syrian city of Homs, after an agreement reached between rebels and Syria's army, Syria May 21, 2017. REUTERS/Omar Sanadiki.