How to Play Putin's Game in Syria 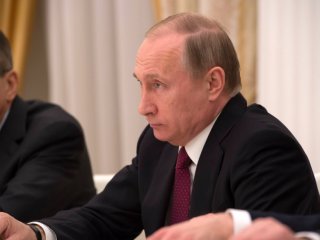 Two weeks after Vladimir Putin announced that Moscow had “generally fulfilled” its aims in Syria and would withdraw the “main part” of its forces, Russia’s defense ministry revealed plans to purchase 10,300 medals for returning troops. The triumphant display—intended separately for the West, Syrian leader Bashar al-Assad, and the Russian public—belies a more complicated truth. Putin’s real accomplishment in Syria was not in improving Assad’s position, and Russian operations may not significantly change. Rather, Putin's true success has been elevating Moscow's standing in the international community. Russia is today an indispensable powerbroker in Syria, and Putin may well try to leverage his gains against concessions on Ukraine and on European sanctions. Washington should be wary of this, but it should not be deterred from working with Russia to end the Syrian civil war.

In announcing the withdrawal, Putin presented a narrative to the West wherein Russia is part of the solution in Syria, and he is not necessarily wrong. Russia has pressured Assad into negotiations; it has helped maintain a partial cease-fire that, despite violations, has been surprisingly successful; and now it is laying the groundwork to pressure Assad further.

An openness to compromise serves Moscow’s interests. Though Russia could effect a military solution by crushing Assad’s opposition, this would deny Moscow its newfound relevance. Putin’s cooperation is critical for the kind of multilateral, political solution the United States hopes to achieve in Syria. By facilitating this settlement, Putin further raises Russia’s international stature and bargaining power.

To Assad, Russia sent a reminder that Moscow is the arbiter of his future. Despite their outwardly cooperative stances, Putin and Assad have had a tense relationship. In January 2016, the Financial Times even reported rumors that Putin had tested the waters of a post-Assad Syria, only to be angrily rebuffed by Assad. Even if Iran were to compensate for Russia’s withdrawal with additional troops, it is worth remembering that it was prior to the Russian air campaign—when Assad was predominantly reliant on Iran and Hezbollah—that the opposition made its most substantial gains. Without Russian airpower, Assad will struggle to gain and even hold territory if opposition groups rebound. Sending this message to Assad reaffirms Putin’s message to the West.

Ultimately, Putin’s most important audience may be domestic. The “victory” in Syria feeds into a Cold War-style narrative played out on televisions across Russia: Russia has reclaimed some portion of its superpower status and now faces off against its old rival, the United States. This nationalistic fervor is, in a slowing economy, more important than ever for legitimizing Putin’s own regime.

So if Russia can force Assad to capitulate on key issues and can help end the war in Syria, should the United States give Putin further recognition? Would doing so suggest to Russia that its interventions can be rewarded? Moreover, if Russia tries to barter cooperation on Syria against concessions on Ukraine and European sanctions, is it possible to avoid a tradeoff that compromises U.S. interests?

These are legitimate concerns, and the United States should try to counter new Russian adventurism—but not at all costs. The war, after all, has resulted in the deaths of what some estimate to be over 470,000 people. Terrorist groups are proliferating in Syria and conducting attacks in the region and in the West. And the flow of millions of refugees threatens the stability of Syria’s neighbors and the European Union.

To work effectively with Russia, the United States should recognize Putin’s consolidated foreign and domestic policy perspective and use this to its advantage. For several years, Putin’s foreign-policy circle has been shrinking and as the diversity of viewpoints has diminished, so has the variety of regional priorities and the distinction between foreign and domestic politics. If success abroad is a pillar of support at home, then Putin’s zero-sum game is not necessarily between Russian and U.S. interests, but between Russian prestige and U.S. prestige. A compromise that benefits Putin’s image and serves U.S. interests is not impossible then, but it must be accompanied with simultaneous pressure.

Washington can offer two bargaining chips to encourage Moscow’s cooperation on Syria. It can frame these as “concessions,” but in reality they are sound policy options regardless of Putin’s demands.

First, the United States should continue to defer the question of Assad’s fate. If Assad were to fall abruptly, it would lead to intense infighting among the fragmented opposition, likely empowering radical Salafist militias and leaving behind a militia rule and al-Qaeda and ISIS strongholds. A truly unified Syria to cannot exist with Assad in place, but his transition must be a matter of years, not months.

Second, the United States should accede to Russia’s calls for the Kurds—Washington’s most effective ally in the fight against ISIS—to be included in the negotiations. Turkey will no doubt be upset, but the exclusion of a group that controls what some estimate to be 15 percent of Syrian territory from negotiations on the country’s future hardly makes sense.

Finally, the United States must remain open to Russia protecting its interests in Syria after the war. If Moscow feels it cannot maintain its naval base, its economic relationship, and an ally in the Arab world, it will not cooperate on a negotiated solution.

While granting these “concessions,” the United States should do its part to make Russia’s aggressive behavior more costly. One way to do this is to put pressure on the Ukrainian front. That Moscow has spent less than $500 million on its Syrian campaign (according to official Russian figures) while pouring tens of billions into Ukraine indicates how much greater of a priority Ukraine is for Putin. Washington does not have to provide lethal aid to the Ukrainians and risk unpredictable brinksmanship, but it may need to stomach endemic corruption and increase financial aid to Kiev to counter Moscow’s influence. Meanwhile, the United States should continue working with Europe to ensure sanctions against Russia hold firm.

Denied success in Ukraine, Putin may find further “victories” in Syria attractive. If he believes it can elevate Russia’s global standing—and in turn reinforce his own domestic base of support—Putin may be willing to press Assad on crucial issues in Syria: allowing humanitarian aid to the worst affected areas, the endorsement of a wider cease-fire, and perhaps even acceptance of a longer-term transition plan.

The alternative to working with Russia diplomatically is to try to bring Assad down by force. Washington would have to drastically increase support for Sunni Arab opposition, something that will likely strengthen radical Salafist militias, or undertake a military operation larger than the 2003 invasion of Iraq. The American public does not have the appetite for such a war.

Russia has affirmed that is not just a regional player, but a crucial global power. That is indeed concerning, but denying this reality is not worth countless more dead and the crumbling of Syria. Cooperation with Russia can be pursued cautiously. Washington does not need to adopt Moscow’s zero-sum worldview, but it can recognize and indulge Putin’s quest for legitimacy when it is necessary to achieve U.S. goals.

Alexander Decina is a U.S. foreign policy research associate at the Council on Foreign Relations (CFR). He has previously worked in think tanks and NGOs in Beirut, Lebanon, and Iraqi Kurdistan during the Syrian civil war. Eugene Steinberg is an assistant editor at CFR and a rising expert at the Center on Global Interests.