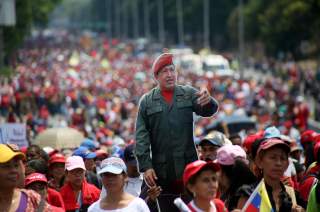 Venezuelan leader Juan Guaidó is gambling that massive civilian protests and nationwide strikes will shake the military’s loyalty to embattled dictator Nicolas Maduro and end the extended political standoff in Caracas. Several have already died, and more violence appears inevitable. But avoiding it is key, because nonviolence tears down dictators better than anything else.

The oft-seen trajectories of domestic protest movements is confrontation, violence and foreign intervention. Indeed, in Venezuela, Vladimir Putin has already personally inserted himself, reportedly urging Maduro not to flee while sending Russian operatives and weapons. The Venezuelan National Assembly has considered invoking the Constitution to openly call for foreign military assistance under the precept of responsibility to protect. And some are urging President Donald Trump to end a festering threat. But invading Venezuela is not the answer, at least not yet.

Studying successful efforts that mirror those of Guaidó and his fellow Venezuelans reveals a workable model: For the movement to be successful, it must have numbers, discipline, and, most importantly, inspire loyalty shifts within the state’s security forces.

There is a 3.5 percent rule that has developed in the civil resistance literature. No movement that has achieved the active and sustained participation of 3.5 percent of the population has ever failed, and lots of them have succeeded with far less than that, according to Erica Chenoweth, a Harvard Kennedy School faculty member.

Tens of thousands are in the streets of Venezuela. How many will it take to oust Maduro? Assuming a population of twenty-nine million (after three million or more refugees have already fled), a simple calculation suggests that the magic number is around one million. It is difficult to perform accounting in a fluid environment, but critical mass could be reached soon if it has not already. But it’s not just the absolute numbers that matter. To force out Maduro, the crowds must be diverse—in social class, age, gender—and geographically widespread. In short, research suggests that when anti-dictaduras look less like an average protester and more like a collage of Venezuelan society, Maduro is more likely to tuck his tail and leave.

Violent rioters tend to drive down the number of protesters as fence-sitters will decide to stay home in relative safety. Violence also emboldens—and to some might even justify—the use of horrific measures by security forces. The Venezuelan people have thus far been incredibly disciplined.

But if, and more likely when, in desperate situations like these, the opposition becomes defined by violence, the chances of a Maduro exit without a foreign intervention plummet. In other words, research shows that violence depresses numbers, the situation worsens very quickly, and then both sides—Maduro and Guaidó—become more likely to call for a foreign intervention, from Russia and the United States, respectively.

Will the military flip? The most crucial question has always been defections. Thus far, Maduro has shown himself capable of ferreting out revolts. While some 1,500 soldiers have defected, the top brass has not budged. That could change very quickly through a concept called “backfire,” defined by Rutgers sociologist Kurt Schock, as a reduction of the power and legitimacy of an authority that uses violent repression against civilians engaged in nonviolent protest.

When regime security forces commit unjustified violence against nonviolent protesters, it draws more people into the streets. If more and more images of the regime ramming tanks into crowds, beating unarmed civilians in alleys, and indiscriminately firing from buildings continue to pour out onto social media, numbers will swell. This could change the calculus of the security forces, causing a quick and immediate swell of defections.

There are signs of elite fracture. The haphazard release of key opposition leader Leopoldo López from nearly five years of house arrest and the regime’s inability to issue even an arrest warrant for Guaidó signal disunity in the dictator’s tower.

No one, at this particular moment, can confidently predict the future of democracy anywhere, much less in Venezuela. But some general ideas about Maduro’s future can be deduced from political science research.

The United States has tightened sanctions on Venezuelan crude—one of the regime’s last legal sources of money. Many are intensely searching for where all the regime’s looted money is stored internationally. That stolen wealth is essential to the survival of any dictator.

At the end of the day, the key is staying power: If Venezuelans continue to turn out day after day in ever-larger, nonviolent, and diverse numbers while Washington tightens the screws from outside, then Maduro will flee in disgrace to Cuba or Russia. But if Venezuela turns into a proxy war-trap for Russia and the United States, then the outcome promises little relief either to the beleaguered people of Venezuela, or to those who worry about an enemy beachhead on America’s southern flank.

Clay R. Fuller is a Jeane Kirkpatrick fellow and Ryan C. Berg is a Latin America specialist at the American Enterprise Institute.