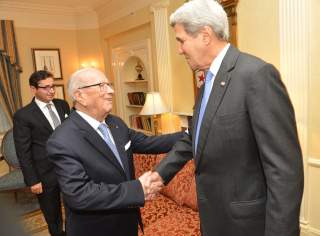 It is entirely fitting that former President Béji Caid Essebsi passed away on July 25, the date which Tunisia celebrates as Republic Day. To fully appreciate his immense contribution to the continued success of Tunisia’s democracy, one needs to go back to 2011, when I had the privilege of serving as the U.S. Ambassador to Tunisia.

In February of that year, the Arab Spring appeared to be on the ropes. Although protestors had succeeded in overthrowing long-time strongmen Zine El Abidine Ben Ali in Tunisia and Hosni Mubarak in Egypt—whose combined authoritarian rule had spanned more than fifty-two years—the prospects for peaceful transitions of power were bleak. In Tunisia, where the Arab Spring began, large demonstrations rocked the capital of Tunis, as protestors called for the resignation of the Prime Minister Mohamed Ghannouchi—a hold-over from the Ben Ali regime—and the end of his interim government.

In neighboring Libya, Muammar el-Qaddafi gave his infamous “zenga zenga” speech on February 22, promising to root out protestors “inch by inch, house by house, home by home, alleyway (zenga) by alleyway.” While his bellicose speech was targeted at Libyans demonstrating against him, it did nothing to ease Tunisian fears that Qaddafi would allow Ben Ali to use Tripoli as a base for returning to power in Tunis. Nor were protests and repression limited to North Africa: that same month, Bahrain was rocked by deadly clashes between riot police and citizens demanding reform.

In short, the mood in Tunisia was unsettled at best, and despairing at worst. It was far from certain that the country could make a successful transition from authoritarian rule to the open political and economic systems that the protestors were demanding. It was then that a well-connected Tunisian businessman advised me to “keep an eye on Béji Caid Essebsi,” whom he claimed was delivering a message that was resonating with the people of Tunisia—and particularly among the youth. I had only met Caid Essebsi once at that point (over a leisurely lunch hosted by another opponent of the Ben Ali regime) and was surprised that an eighty-four-year-old former official would be poised to lead the country. But then, on February 27, Prime Minister Ghannouchi resigned and Caid Essebsi was appointed to take his place. His appointment was an important transition point in the maturation of the democratic process in post-revolutionary Tunisia.

Caid Essebsi had a clear vision: having dispatched Ben Ali, Tunisia now needed to look ahead and take affirmative steps to build a democratic system. His first step was to reshape the Cabinet that he inherited, dismissing hold-over and those with future political aspirations. A second equally important step was his government’s March 3 announcement that elections would take place for a Constituent Assembly to write a new Tunisian constitution.

By taking these two actions during his first week as prime minister, Caid Essebsi made clear that the new government would be focused on setting the groundwork for the elections and would, therefore, be limited in duration. He read the public mood accurately and instilled a sense of confidence and purpose. Not everyone was satisfied—protests continued, although with diminished numbers and intensity—but most Tunisians were pleased with the path to elections.

In October of that year, then-President Barack Obama met with Caid Essebsi in the Oval Office. Despite the generational difference between the two leaders, they soon established a friendly rapport. During the meeting, a senior White House staffer passed me a note saying “it looks like you have a great job.” And when the meeting concluded, two others told me that they wished all Oval Office meetings went just as smoothly. Among the significant initiatives announced to support the Tunisian transition were re-establishing a Peace Corps program; providing sovereign loan guarantees; and creating an enterprise fund. The U.S.-Tunisian relationship has only grown since then, and should continue to deepen in the years ahead.

On October 23, 2011, shortly after that White House meeting, Tunisia held the first truly free and fair elections in the nation’s history. And in December of that year, Caid Essebsi passed the baton to the newly-elected government.

When I learned Caid Essebsi had passed away, I remembered the gracious token of friendship that he had given me when we first met: an inscribed copy of the biography that Caid Essebsi had written about his mentor Habib Bourguiba, Tunisia’s first president. In presiding over the peaceful transition of power in 2011, Caid Essebsi created a powerful and lasting legacy of his own. The democratic government of Tunisia—and the people it serves—will always owe him a great debt.