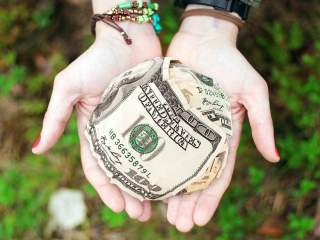 Americans have big hearts. They give more than $360 billion every year to good causes. Yet very little of that goes to keeping themselves, their families, communities or country safe from our nation’s enemies.

Most Americans figure that defense is the government’s job. And if Washington is not up to the task, well, they don’t imagine that donations can do much to match the hundreds-of-billions the Pentagon spends. They are wrong. Targeted philanthropy can deliver significant competitive advantages to the U.S.—and that support will be vital to rebuilding our national defense.

By objective measures America’s hard power is declining. Even if the next administration is committed to reversing the decline, it will take time and resources that are in short supply. Future presidents will have to balance rebuilding military power with concurrent efforts to rein in federal spending and the debt. At the same time, they will need to reassert American influence in multiple critical parts of the world.

Washington is going to need all the help it can get.

When philanthropists turn their attention to making the world safer for America, they usually focus on the softer side of security: assistance, democracy promotion, or civil society. The idea is to cool embers before they fan into violence or put out brush fires before they reach American shores. Much of that aid, while well-intentioned, falls short; hit-and-miss activities can even make conditions worse.

Even when aid actually aids, it doesn’t always stop threats from arising in the affected area. Besides, many national security dangers don’t arise not from failed states, but from very capable states—like Iran, Russia and China—or powerful nonstate actors like ISIS.

Scant philanthropy goes to actually aiding U.S. efforts to beat back bad actors. Indeed, a long-standing principle of international aid efforts has been: Don’t take sides. (The Red Cross adopted this concept as one of its core principles in 1921.) That limits the ability of programs to directly impact U.S. security interests.

Arguably, there is no reason why philanthropy can’t be focused on specifically supporting US efforts. After all, any effort that imposes itself in a security situation becomes more than a neutral actor. Nadia Schadlow, who directs foreign-policy giving at the Smith Richardson Foundation, argues that the space for “neutral” aid is actually relatively narrow. “Once any long-term effort to alleviate suffering begins, it becomes political,” she points out, so “not taking sides” is often more a theory than a practical reality.

Indeed, there are organizations, like Spirit of America, that already work side-by-side supporting U.S. troops in the field with humanitarian aid projects. “This is not conventional charity. It is not neutral. Everything is done in support of U.S. troops,” says Jim Hake, who heads Spirit of America. “We advance human security and well-being. But taking a side breaks new ground in international assistance.”

In many cases nonneutral organizations supported by philanthropy are demonstrating greater effectiveness than the governments they are supporting. A nimble philanthropic organization operating at the “retail” level and paying careful attention to detail can often be more effective than a government-run entity.

National-security philanthropy can play a significant operational role in security matters (for example, there are private [nonmilitary] efforts going on as we speak to help the Kurds in Iraq deal with the ISIS threat), but it can also make an impact in the functional tasks of defense and security—particularly in developing niche capabilities that the military services have difficulty delivering themselves.

Philanthropy for defense programs is basically private funding for activities supporting defense without expecting return benefits to specific persons or organizations. Like any philanthropic effort, building future defense capabilities could be considered an intrinsic social and public good that creates a margin of excellence for the armed forces.

Historically, philanthropists have banded together to support professional military education, for example. From the academies to the war colleges, all the professional military schools garner philanthropic support for everything from traditional student activities to research centers like the Combating Terrorism Center at West Point. Philanthropic efforts also contribute ideas—from policy recommendations to intelligence assessments—through funding a variety of think tanks and other research organizations. Developing military capabilities, however, doesn’t have to be limited to developing minds.

Historically, American philanthropists have helped deliver real military capabilities. Alfred Lee Loomis’ work on the development radar (described in The Wizard of Tuxedo Park) provides an excellent exemplar for philanthropic R&D in the defense sector. Loomis personally funded pioneering research into new, high-powered radar detection systems. He developed the new technology to the point where war-fighting applications were recognizable. He then operationalized it so that the U.S. military could use radar to “see” for hundreds of miles and spot enemy airplanes, ships, and submarines. Given the exigencies of WWII, Loomis was able to bludgeon bureaucracy to rapidly deploy this new technology on the battlefield. This single scientific development gave the Allies a significant competitive edge, helping them defeat the German Air Force and U-boats.

The Loomis model basically works like this: 1) Develop technology to the point where operational use is recognizable. 2) Recognize the value of fielding the technology, and apply technology to unique circumstances. 3) Convince the services to implement new technology in the military space.

The radar model might be worth emulating. Today, philanthropy in the national-security space could bridge the gap between the military’s mission and its current capabilities. Philanthropic support for innovative technologies with the potential for operational use would yield enormous benefits for both the military and civilian population.

There are niche areas where a well-thought-through philanthropic effort with a modicum of support might be able to accomplish something that the vast military-industrial complex cannot. While the armed services have a lot of resources, they also have a lot of competing demands; often what gets squeezed out are niche efforts that might deliver big pay-offs. Of course, the Defense Department has agencies like DARPA that do high-risk, high-payoff research, but there are many paths to innovation.

Who is to say that a private, philanthropic effort unbound by bureaucracy or Congressional “help” or share-holders might not deliver a key competitive innovation—better, faster, cheaper than other paths?

By leveraging, the leaner, less burdensome private-sector path to innovation some really groundbreaking innovation for national security could be delivered for $100 million or less. In terms of what “Big Philanthropy” throws at some problems, that is pretty small ball.

The biggest challenge would be organizing the effort right from the start. With foresight, a talented, private-sector team can anticipate and overcome a host of challenges. Philanthropic organizations would need to assemble properly structured and effectively equipped teams. Structurally, a largely virtual program with a matrix-like organization would need to be divided into smaller teams, each focused on specific needs. Teams would be devoted to the following issues: the development of technology, the intersection between science, engineering and manufacturing, military training and sustainment, civilian industry, and the legal and intellectual property issues with transition.

Overseeing these units, the management team would need to be composed of leaders who understand military requirements, defense acquisition, congressional decision-making processes and the inner machinations of the scientific and industrial community. These factors would enable philanthropic organizations to stimulate and advance innovation in an efficient, flexible and economical manner through the effective management of highly specialized teams.

Areas where philanthropy-led innovation might yield payoffs of strategic relevance include assistive robotics and neuroscience. Both areas hold the promise of dual-use benefits, with many civilian as well as national-security applications.

Advances in assistive robotics are already being applied to help injured service members as well as disabled or elderly civilians overcome physical limitations and improve their quality of life. Just as modern military medicine enables us to save wounded warriors who never would have survived in previous conflicts, so assistive robotics can help them improve their function, retain their independence and reengage in society when they come home.

Similarly, developments in assistive robotics could provide numerous benefits for the world’s aging population. By 2020, 6.5 million Americans will be over eighty-five. Robotics could contribute to healthcare in terms of capacity, quality (performing very accurately and task specific), finance (supporting or even take over tasks of trained personnel), and experience (increasing feelings of autonomy and self-management).

The armed forces are already undertaking a fair amount of research and development in the robotics sphere, but like most military research programs, these projects are driven by identified requirements and competing for scarce development dollars. A private philanthropic effort could work in an unoccupied niche to deliver competitive advantages that might be otherwise missed.

“Operationalizing” neuroscience is another potential “military-edge” that would also produce in dual benefits. Research and development in neuroscience could enhance education, training and decision-making as well as long-term cognitive health. While most recent advances in neuroscience have focused on transferring results to the medical community and healthcare, operationalizing neuroscience for everyday use would fully recognize true human potential and have tangible application in the defense sector. Specifically, researchers should focus their efforts on creating a baseline “cognitive standard” that would measure how a person is wired to “think, feel and act.” This would enable educators and capability developers to “tailor” their efforts, creating innovative solutions that would maximize individual learning and performance capabilities.