How Putin Is Manipulating the Coronavirus Debate in Russia 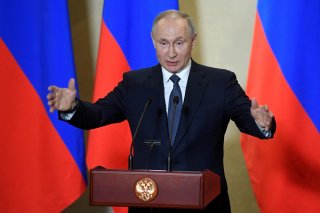 The number of people infected with the coronavirus and killed by COVID-19 in Russia is growing. While the whole world is trying to survive the pandemic, the progressive internet community in our country is arguing about why the official spokesman for the Ministry of Foreign Affairs, Maria Zakharova, and the main opposition leader, Alexey Navalny, have not held a debate.

This debate over the non-debate was triggered by accusations from Navalny, who disputed Zakharova’s statement that travel is a privilege for the rich. In an interview, the diplomat said she was troubled by the fact that air travel has become too accessible for most people. Next Zakharova challenged the opposition leader to a battle on live TV. Then she abruptly changed her mind and refused to participate in the debate, blaming Navalny.

Trying to figure out who is right and wrong in this little conflict is a thankless task. At any rate, each side has its own audience. Whatever Zakharova says, she will be supported by those who are labeled “patriots." At the same time, the so-called liberals will take the side of their presumed leader. Another curiosity is why a senior official like her descended to debating a "fighter against the regime” in the first place, considering that all official state TV channels are normally closed to him and go so far as to avoid mentioning his name so as not to provide him with any additional publicity.

In fact, Zakharova herself often goes on the air for an opposition outlet which openly criticizes Putin and solely focuses on the negative aspects of Russian reality. This same outlet also provides a platform to the world chess champion and noted Russophobe Gary Kasparov, who regularly broadcasts virtually from New York with loud calls for the overthrow of Putin.

The “Echo of Moscow” became a platform for another opponent of the Russian President—the oligarch Mikhail Khodorkovsky. Incidentally, 66 percent of all shares of the radio station belong to “Gazprom-Media Holding,” which, in turn, is owned by “Gazprombank,” where the state has a controlling stake. So why does the radio, which indirectly belongs to the government, allow regular insults to the country and its leadership? Does this mean that, despite widespread perceptions to the contrary, there is still freedom of speech in Russia? Or, conversely, is any confrontation with the government on liberal media platforms just a controlled spectacle to create the appearance of such freedom?

Another interesting fact is that the well-known opposition personality Ksenia Sobchak, who competed with Putin in the presidential elections, now hosts a talk show on the country's main TV channel in prime time. So perhaps this is merely a simulacrum of the real struggle of political forces? Is there, in fact, any opposition in Russia?

In the United States, they film great TV series about politics, in which they are not afraid to show the intrigues of the country's top officials, the vices of the president, or the dirty methods of the secret services. You start to believe in American democracy. In Russia, though, a bold movie like this is rare. In the only Russian political series, "Sleepers," the main character fights with the hated Americans, and there is no criticism of the country's leadership. The only thing the producers and writers dared to show was the cozy relationship between liberal media heavyweights and the authorities. It implies that the opposition criticizes the government in public, but unofficially is friendly with it.

Perhaps this is a dubious argument because "Sleepers" is not a documentary film. However, interestingly enough: the screenwriter of this multi-part film, Sergei Minaev, was funded by Vladimir Putin's assistant, Vladislav Surkov. He probably knows a little more about the backstage of Russian politics than the average citizen. And the editor-in-chief of the key opposition radio “Echo of Moscow,” Alexey Venediktov, has himself talked about his allegedly close friendship with Putin's Press Secretary, Dmitry Peskov.

It was also not so long ago that Venediktov was accused of sexual harassment, but the topic was ignored by federal channels. However, when it comes to sexual harassment in the United States, it is trumpeted day and night. But Venediktov, who would be a logical target, was not attacked by Kremlin propagandists.

It starts to make you wonder: is there, in reality, no meaningful high-level confrontation? Is what we are witnessing simply an illusion of political struggle? The problem is that ordinary people sincerely believe in their leaders to the point of poisoning relations with their loved ones, arguing about who should control Crimea or who is responsible for canceling the debate—Zakharova or Navalny. Occasionally they throw the public a bone from above in the form of a news story, pitting people against each other and distracting them from real problems.

Artificially created conflicts between liberals and “patriots” during the epidemic appear to be a diversion, so as to avoid answering why the citizens are not compensated for quarantines which amount to their forced imprisonment, and the opposition in Russia serves as a kind of lightning rod. People moderate their fervor and calm down for a while, sincerely believing that there are people who represent their interests. Why stray afar when I myself look in the direction of the opposition every time the government passes some anti-humanitarian law like pension reform or another restriction? The hand itself reaches out to like the Facebook posts of Navalny and those like him.

Moreover, these "opponents of power" sculpt new heroes. There were several episodes with the promotion of new figures in the media space. For example, in one episode there was the story of a mounted police officer, Tatyana Zima, who was fired for subscribing to Navalny's Instagram account. More than a million people have subscribed to his page, but they only paid attention to this particular girl. She was very actively promoted by Navalny himself, Ksenia Sobchak, and the opposition media.

Nor is this all. Lyubov Sobol, a lawyer for the “anti-corruption fund” created by Alexey Navalny, was turned into a victim of the Putin regime. She even went on a hunger strike for several months, defending the right to participate in Moscow City Duma elections, in which she was not allowed to participate in 2019. Sobol has become the face of protests in Moscow, and now, surprisingly, foreign Ministry official Zakharova is calling her in person to discuss the terms of the debate. Why a diplomat of her level contacts low-ranking oppositionists who are supposed to be treated as outcasts, devaluing her own status in the process, remains unclear.

What's more, blogger Alyona Vodonaeva, who became famous for participating in a scandalous reality show, was abruptly reclassified as a political expert afterward, and now records critical anti-government videos on YouTube. Yegor Zhukov, who recently received a suspended sentence for participating in a forbidden rally, became the host of a radio program for "Echo of Moscow".

Such figures are now being transformed into leaders of public opinion. And in the next state Duma elections, we will see them as opposition candidates. Something tells me they will not be allowed to register as candidates. They will become even more famous, and the Russians will have new lightning rods. Without these public squabbles, the people would have long ago directed their negative energy to overthrow the government. And when there is somebody who seems to perform this role, it is no longer necessary for citizens to become personally involved.

When I shared my observations and conspiracy conclusions about the managed opposition in Russia with a friend, he asked why, if the Kremlin is so powerful that it masterfully manipulates the opposition, it can't restore order in the economy. The answer is simple—it is much easier to manage the consciousness of the people by arranging endless shows than to ensure the growth of the economy.