How Russia and Iran Dominated the G7 Summit 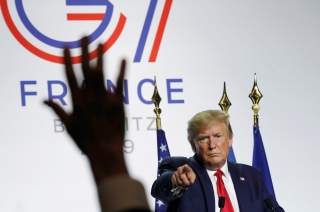 Monday concluded the three-day summit held in Biarritz, France, by the Group of Seven (G7), which is composed of the most advanced economies in the world: France, Canada, Germany, Japan, Italy, the United Kingdom, and the United States. European Union Council President Donald Tusk was also present, along with a litany of heads of state who were each invited by a participating G7 member.

This year’s meeting comes at a precarious time for all of the key participants. The host, French president Emmanuel Macron, has approval ratings that hover in the low thirties after his response to the yellow vests movement. Canadian prime minister Justin Trudeau is being dragged down by a corruption scandal. Japanese prime minister Shinzo Abe is in the middle of a trade war with South Korea. German chancellor Angela Merkel has announced this will be her last term in office, as she tries to cobble together a successor. Italian prime minister Giuseppe Conte resigned days before the summit and attended only as a caretaker role. British prime minister Boris Johnson has been in office only a month and is staring down a no-deal Brexit come October. And President Donald Trump brings his own repertoire to wherever he visits.

The biggest headline of the weekend came with the visit of Iranian foreign minister Mohammad Javad Zarif, on invitation from the French government. This surprised many in the United States since recent months have seen an escalation of tensions with Iran that have narrowly avoided war. This has included putting sanctions on Zarif himself.

“If the French did in fact invite Iranian Foreign Minister Zarif to the G7 without consulting the US, it would be a signal of great weakness to Iran and terribly disrespectful to President Trump. Hope President Trump maintains steady resolve against Iranian aggression,” tweeted Senator Lindsey Graham (R-SC), an influential hawk in Trump’s shadow cabinet.

“This is completely disrespectful to @realDonaldTrump and the other leaders at the G7. Iran supports terrorism at every turn and continues to pursue ‘Death to America’. Manipulative of Macron to do this and very insincere,” agreed former UN Ambassador Nikki Haley.

When asked during a press conference, Trump said he did in fact know about the invitation and that it was the opposite of disrespectful. “President Macron asked my approval. We have a very good relationship,” he told reporters.

“That was really foolish of them [Haley, Graham] to say,” said Barbara Slavin, director of the Atlantic Council’s Future of Iran Initiative. “Obviously, Macron let Trump know that Zarif was coming ahead of time. He wouldn’t have blindsided him that way. I think that showed a real lack of judgement on the part of the two individuals you mentioned. Trump is his own man. He’s going to do what he wants to do.”

Daniel DePetris, a fellow at Defense Priorities, believes the domestic criticisms of Iran hawks just add up to hot air. “I think it’s false outrage. A lot of it is geared for domestic political purposes. I think we’ve gotten to a situation now with the Iranians where we’ve dug ourselves into a hole, and instead of trying to get out of it we’re digging ourselves deeper,” he told the National Interest. “I think Macron did Trump a favor by inviting Zarif to Biarritz. Obviously, Trump didn’t meet with Zarif this time, but the fact that he’s open to a discussion, even with President Rouhani, maybe the two will meet at the General Assembly next month.”

President Trump reiterated this weekend that he’s interested in new negotiations with the Iranian government with no preconditions.

“The other part I think we should mention is that it’s great that Macron showed that the U.S. sanctioning of Zarif was meaningless in many ways, and gratuitous, and counterproductive. Zarif is flying all around the world, he’s going to see everybody else, so obviously nobody was paying attention to these U.S. sanctions on Zarif,” added Slavin.

The other key player in the G7 was the one who wasn’t there at all: Russia, which was removed from the G8 after Moscow’s annexation of Crimea in 2014.

Jack Matlock, U.S. ambassador to the Soviet Union from 1987 to 1991, explained the context of Russia’s ejection from what was then the G8: “It was a reaction to the situation in Ukraine, which was largely an internal Ukrainian affair. Russia would not have acted as it had if there had not been an attempt to bring Ukraine into NATO and to bring it into the EU without Russia. This was considered highly provocative and so what happened in Ukraine was a tragedy, certainly for Ukraine, but it was brought about by Russian reaction to Western policy,” he told the National Interest.

Both Presidents Trump and Macron have advocated including Russia during next year’s meeting, which will take place in the United States. This has drawn criticism both internationally, including from the UK, Canada, and the European Union, and from President Trump’s domestic critics.

“As the United States takes on the responsibility of organizing and hosting the next G-7 summit, it is appalling that President Trump appears hell-bent on inviting Vladimir Putin back as Russia continues to forcibly occupy Crimea, interferes in our elections, and initiates a new arms race. Allowing Russia back into the G-7 would only show President Trump’s weakness in the face of Putin and his oligarchs and make the United States less secure,” Senate Minority Leader Chuck Schumer said in a statement Monday.

Stephen Cohen, professor emeritus of Russian studies and politics at both New York University and Princeton, believes excluding Russia from Western institutions will not degrade its geopolitical flexing. “Historically the West, particularly the United States, has done a lot of things to ‘change Russia’s behavior.’ And I can’t think of any instance, except when it was in the form of carrots (détente) rather than sticks (more Cold War) when it’s ever been successful. So, this seems to be folly,” he said.

“I thought it was a mistake to begin with,” agreed Matlock. “It seems to me it’s a detriment to the institution itself, not to have Russia’s participation. And the idea that this will somehow change some of their foreign policy I think has been proven wrong.”

When it came to the prospect of Trump inviting Putin to next year’s meeting, neither DePetris, Matlock, or Cohen put much stock in the result. DePetris emphasized that the G7 was more show than substance, and that Russia doesn’t need to be a member for Trump to meet with Putin. Matlock said that Putin should refuse to attend unless he’s considered an equal peer with the other members.

Cohen doesn’t look forward to the media outrage such a visit would cause. International visits by Russian and Soviet leaders were once ordinary, but now they’ve become politically toxic. “There was a time when having a successful East-West summit with a Soviet or Russian leader was an electoral plus. Because you’d go to the people say look, ‘I’m ridding Europe of nuclear weapons, I’m keeping the peace, I’m reducing the nuclear threat, we’re having new arms control agreements.’ We don’t have that world anymore,” warned Cohen.

Hunter DeRensis is a report for the National Interest.