How Russia Could Divide NATO and Win a War 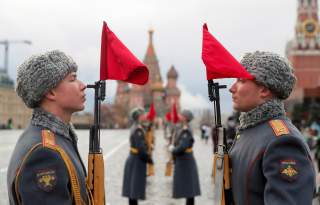 In September, Russia and Belarus launched the Zapad 2017 military exercises, which saw a snap mobilization of thousands of troops on Europe’s doorstep, stoking fresh fears of renewed Russian aggression. Understandably, the exercises have added fresh urgency to discussions among NATO members about how to best answer provocations like Zapad; or indications that Russia may be deploying more missiles to Kaliningrad, its heavily fortified exclave. Russian brinkmanship should not go unanswered, but an effective response does not necessarily need to be symmetrical—force buildups with force buildups, and moves with countermoves. There are other arrows in the proverbial quiver.

This year’s edition of Russia’s quadrennial war game saw the two allies muster their forces to fight fictional Eastern European states with analogous geography to the Baltic States—all EU and NATO members. The scale and complexity of the drills were not lost upon Western analysts and military leadership, fueling worries that Zapad could be yet another precursor to a Russian intervention, as it was ahead of its wars in Georgia in 2008 and Ukraine in 2014. Amid the customary information haze, Moscow’s ultimate message was clear: it’s military is back, and Western attempts to contain or deter it would be fruitless—even as NATO forces took part in neutral Sweden’s own exercises, and four NATO “reassurance” battalions set camp in the Baltics.

The Russian “victory” over Zapad’s Baltic analogues was not just preordained bombast. Numerous assessments have already confirmed that in the event of a large-scale contingency between NATO and Russian forces, the Baltics would not only be vulnerable, but initially indefensible. A widely circulated study by the RAND Corporation found that a Russian offensive would reach the capitals of Estonia and Latvia in less than sixty hours. Lithuania, sandwiched between the heavily garrisoned Russian exclave of Kaliningrad and Moscow’s treaty ally Belarus, would fare little better.

Calls to marshal heavy forces on Russia’s doorstep are understandable, but it may only increase the risk of conflict while exposing more Allied troops to withering Russian fire in the opening salvos of a war. While ignoring Russian saber-rattling is not a workable policy, arguments such as those over the “right” conventional deterrence mix in Eastern Europe (important though they may be) essentially concede any Western response to the circumstances and domain of Russia’s choosing. This tendency to react symmetrically to the latest provocation or probing action may help explain why United States and European policies so often seem at least one step behind Russia. Yet, if Moscow has embraced asymmetry, shouldn’t the West?

The logical advantages of strategic symmetry are obvious: they directly address the incident or issue in question; they draw clear linkages between the action and reaction; they compartmentalize the problem; and they tend to have reasonably foreseeable effects, which is important from a risk management perspective. However, the same proportionality also makes any Western response all too predictable, and thus anticipated and contestable. By the time Western governments have identified, debated and formulated a response to Russian actions, Russia will have already long moved on to another theater or domain.

Russia cannot match NATO militarily in quantity or quality—but Moscow knows it does not need to if the Alliance can be divided, if members are unwilling to act, and if it can goad the US and Europe into a series of strategic blunders. Major Russian military operations over the past decade in Georgia, Ukraine and Syria all demonstrate how decisiveness and first mover advantage can reconfigure the strategic picture to Moscow’s liking, even in spite of Western pushback. Meanwhile, drawn out deliberation and execution have blunted or obviated Western responses, allowing Moscow to consolidate its gains and identify the next strategic opportunity.

Russia prefers to contest Western primacy in those domains where it is strongest, where it may operate with a certain level of deniability, or both. This is why Russia acts with relative impunity in its so-called “near abroad,” and in areas where it can achieve maximum impact relatively inexpensively. This also helps explain its activities in the information space and cyber domain, and why Moscow regularly brandishes its superpower-sized nuclear arsenal, and often meets Western calls for a firm line with Russia as tantamount to inviting “World War III.”

During the Cold War, U.S. defense planners identified similar tendencies in the Soviet Union, which was widely perceived as having conventional supremacy on the ground. It was in this context that the AirLand Battle warfighting doctrine was developed, which sought to offset Soviet land power advantages using NATO’s own strengths in mobility and air power. The nature of the challenge has changed, but the underlying principles have not. Countering provocations or pressure by adversary states like Russia should be formulated on Western strengths, and not dictated by the adversary.

What would this look like in practice? Exhaustively fortifying the Baltic States is likely a strategic nonstarter, as even a perfect defense would likely only invite Russian countermoves elsewhere. Instead, Western states might link Russian provocations with measured counter-escalations calibrated to wrest back the initiative and sow confusion in the Kremlin. These responses need not be military. One idea might be to create policy mechanisms that could shepherd embattled Western partners like Georgia and Ukraine into NATO; such a move would not guarantee accession, but would complicate Russia’s habits of cultivating separatist proxies to inoculate its neighbors against Euro-Atlantic integration. Or, Western attentions could be better organized in the Arctic to confound Russian plans to dominate that region’s increasingly viable sea lanes and mineral wealth.

Strategic symmetry has its place in the toolkit. After all, some challenges must be directly contested. But it is not the only option. An asymmetrical strategy could allow the West to respond from positions of relative strength, while depriving its adversaries the sensation of continuous success. Putting Russia on the back foot for a change can help restore a sense of balance, and hopefully pave the way for a more constructive, durable relationship.