How Russia Could Help Solve the North Korea Crisis 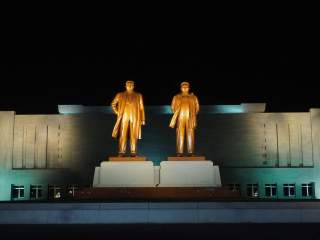 In 2016, significant disputes broke out between the White House and the Pentagon regarding how much to prioritize cooperation with China on North Korea versus confrontation regarding developments in the South China Sea. Now the Trump administration appears to have settled this argument, at least for now, favoring cooperating with China in order to encourage Beijing to help keep Pyongyang’s nuclear ambitions in check. Not only has President Trump said that China’s resolute action on the North Korean issue would be rewarded in the context of China-U.S. trade negotiations, but it was also revealed last week that Washington has seemingly opted to dial back pressure on China in the South China Sea.

This apparent shift in strategic priorities is actually long overdue. As argued many times in this forum, the situation on the Korean Peninsula is genuinely much more dangerous for U.S. national security (and its allies) than arcane arguments about “reefs, rocks and low-tide elevations” in the South China Sea. However, there is still a major problem built into the logic of current U.S. policy: the dubious assumption that Beijing certainly has the power and will to rein in Pyongyang on its own. As an unsigned editorial from Global Times [环球时报] intoned back in mid-March: “Washington . . . clearly understands that Beijing cannot ‘control’ Pyongyang. . . . North Korea is a completely independent and sovereign state” [华盛顿…明明知道北京‘控制’不了平壤.朝鲜是完全独立自主国家]. This is not to say that Beijing’s role is not primary. Of course, it has more power and leverage than any other relevant actor. Still, China will need the active support of all other Northeast Asian states in order to guide the Korean Peninsula to a “safe landing” in the current storm. Japan, South Korea, and the United States all have major roles to play—following China’s lead—along the path of de-escalation, freeze and eventual disarmament. But the position and potential of Russia have been perhaps most neglected by analysts of the unfolding crisis.

Moscow’s role on the Korean Peninsula has been generally derided in Western media as alternatively inattentive, ineffectual or even deleterious. Chinese interpretations have been decidedly more welcoming to increasing Russian attention to the North Korea issue, an apparent trend since the 2014 Ukraine crisis. Indeed, an appraisal under the headline “North Korea and Russia Embrace” [朝俄拥抱] in the leading magazine Finance and Economics [财经] at the conclusion of 2014 concluded: “China wants to see North Korea break out of its foreign policy isolation, so if Russia and North Korea improve economic ties, this will lighten the long-time burden on China.” At the end of March 2017, Chinese TV news gave effusive praise to the sortie of Russia’s Pacific Fleet into the Sea of Japan as a military counter to U.S. and Japanese strategic pressure in and around the Korean Peninsula.

At the same time, Russia’s defense leaders were also indicating greater solidarity with Chinese assessments of the Korean situation, such as in a headline from Izvestiya a few weeks back: “General Staff: U.S. Missile Defense System Threatens the Nuclear Forces of Both Russia and China” [Генштаб: система ПРО США угрожает ядерным силам РФ и КНР]. And the Russian military press did not miss the double meaning of the Syria strike, with headlines afterward such as “Syria Has Been Hit, So North Korea Will Be Hit Next?” [Ударил по Сирии, ударит и по Северной Корее?]

A detailed and comprehensive analysis of Russia’s policy toward the Korean Peninsula was published in the Chinese academic journal Northeast Asia Forum [东北亚论坛]. The authors explain several reasons why North Korean nuclear weapons are a “direct attack against Russian national interests.” Such instances of nuclear proliferation, it is explained, dilute Russia’s status as a nuclear superpower and also threaten the credibility of the UN Security Council, a vital status symbol for Moscow. Also, the authors suggest that continuing tensions on the Korean Peninsula form a significant obstacle to the further economic development of the Russian Far East. Noting that Russia lacks for economic leverage, the analysis does still emphasize “the continuing significance . . . [of Russia’s] enormous military power” [强大的军事力量…仍然具有重要意义].

Undoubtedly, Russia’s good relations with South Korea are a major factor in Moscow’s calculations. According to this analysis, Russia’s trade with South Korea increased by more than ten times between 2002 and 2013. Indeed, extensive investments by South Korean companies in Russia have been keenly appreciated. Of course, 2014 was the big year for accelerating Russia–North Korea ties, because of the Ukraine crisis. This analysis relates that Kim Jong-un sent a letter to Putin in October 2014, expressing a desire for comprehensive ties and the hope of resolving current problems on the Korean Peninsula. According to this report, there is an ambition to increase bilateral trade to $1 billion by 2020, and Moscow has apparently agreed to invest billions in upgrading North Korea’s rail system.

Evaluating this report by Chinese analysts, one is tempted to consider that Moscow and Beijing are fated to compete for influence on the peninsula. But this is one reason why we are in the miserable situation that we are in today. After all, Soviet leaders allowed the spread of nuclear technology into North Korea as a way to prevent it from siding with China in the Sino-Soviet conflict. Against the conventional wisdom that the West should encourage fractures in the budding Russia-China partnership, what is needed now is intricate coordination by Moscow and Beijing to induce Pyongyang to accept a settlement.

While Beijing will necessarily do much of the heavy lifting in such a settlement process, Moscow may have an increasingly prominent role. Why? First and foremost, North Korea does not fear Russia, giving it a wholly unique position among the relevant powers, as one prominent Korea specialist explained to me in St. Petersburg recently. Pyongyang may not fully trust Moscow, but it is patently obvious that this relationship is now much better than the fraying Beijing-Pyongyang channel. Putin has himself met face-to-face with Kim Jong-un’s father, and the current North Korean leader was invited to Moscow back in 2015. Paradoxically, the Kremlin’s rather toxic relations with Washington could help enable this diplomatic outreach to Pyongyang. Moreover, the Syrian intervention may serve as another sign that Russia is a loyal ally that does not shrink from confrontation with the West. Russia’s military might could be essential in extending security assurances to North Korea that would enable it to agree to the process of denuclearization. As Russia’s premier North Korea specialist Georgy Toloraya explained in an academic study last year, security assurances are key to resolution of the crisis. But obviously, for Moscow the overriding incentive to get involved in the North Korea crisis would be to provide “public goods” to the international community by coaxing North Korea into a settlement, thus earning substantial kudos from the West, including perhaps sanctions relief.

The basic shape of a settlement for the Korean Peninsula is actually not too hard to fathom. Russia and China would extend security guarantees, up to and including a “tripartite military accord,” complete with forward deployments, conventional arms transfers and regular joint exercises. Russia and China (rather than the International Atomic Energy Agency) would jointly oversee the process of denuclearization in North Korea after a freeze was secured. The United States and its allies would agree to gradually ease sanctions, cease ideological efforts to undermine the DPRK, restructure the alliances to be more defensive, and initiate trade, economic assistance and diplomatic relations.

Maybe the above sounds like pie in the sky, akin to the chance of setting up an NBA franchise in Pyongyang. Well, who would have expected a nuclear accord between the United States and Iran five years ago—which seems, against all odds, to be holding still? In Moscow, a young but very wise defense analyst familiar with the Korean situation proposed the following interim accord as most realistic: in exchange for security guarantees and limited sanctions relief, Pyongyang might agree to halt nuclear testing, and curtail ICBM and SLBM development.

Let the talented Sergey Lavrov put the Syrian problem aside for a month or two, to focus his energies on reaching an admittedly highly complex accord on this most urgent diplomatic problem. There would be major benefits for Russia, the whole world community and, yes, for both Koreas too.