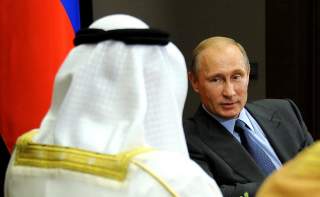 Since the outbreak of the Syrian Civil War in 2011, relations between Russia and the Gulf Cooperation Council have deteriorated sharply due to disagreements between both actors over the future of Syrian president Bashar al-Assad. Russia has strongly supported Assad, claiming that his Baathist regime is a bulwark against Islamic extremism. By contrast, the Saudi-led GCC has actively supported Assad’s ouster, as his demise would reduce Iran’s regional influence. This discord, combined with a Russian-Saudi oil-price war, has caused many Middle East experts to argue that Russia-GCC relations are at a historic nadir.

A closer examination of geopolitical dynamics in the Middle East reveals that growing perceptions of a crisis in Russia-GCC relations are misplaced. In fact, a credible case can be made that Russia’s geopolitical influence and soft power in the Persian Gulf has increased since the start of President Vladimir Putin’s third term in 2012. Through stronger investment linkages and diplomatic overtures, Russia has attempted to carve out a more prominent geopolitical role in the Persian Gulf. Russia is unlikely to threaten Saudi Arabia’s hegemony over the GCC bloc. But stronger relations between Moscow and Saudi Arabia’s closest allies have caused some GCC countries to be more receptive to Russia’s calls for a political solution in Syria. Saudi Arabia’s fear of being isolated from the Arab world’s consensus could cause Riyadh to eventually soften its belligerent anti-Assad approach and diplomatically reengage with Russia. This scenario differs dramatically from the Russian-Saudi collision course predicted by many regional analysts.

Notwithstanding their disagreements over Syria, Russia has strengthened economic ties with Qatar, the UAE, Oman and Kuwait to balance against Saudi Arabia’s hegemony in the Persian Gulf. These economic linkages have been successful in resolving long-standing disputes that have impeded cooperation between Russia and the Gulf states for decades.

Yet Russia has attempted to find common ground with Qatar through energy sector cooperation. Russian energy giant Gazprom has expanded its cooperation with Qatargas on liquefied natural gas production.

When asked about the Russian energy minister’s calls for $500 million in annual trade between Moscow and Doha in June, Qatar’s Energy Minister Mohammed bin Saleh al-Sada called for a significant expansion of bilateral economic cooperation at both the governmental and private-sector levels. Qatar’s long-standing strategy of omnibalancing to maximize its regional influence means that expanding economic ties with Russia is a rational move for Doha. Therefore, Russia has an opportunity to carve out an economic foothold in the Gulf country that has historically been the most hostile towards Moscow.

A similar pattern can be observed in Russia’s relationships with other Gulf countries. According to Evgeny Satanovsky, president of the Moscow-based Institute of the Middle East, Oman’s trade linkages are largely detached from broader geopolitical developments in the Middle East. This detachment has allowed Russian-Omani trade relations to grow from $13 million in 2010 to $100 million in 2014.

Investment linkages have strengthened Russia’s relationship with the UAE as well. Emirati businessmen have invested in facilities for the 2014 winter Olympic games in Sochi, assisted in the construction of a major port near St. Petersburg and cooperated with Rosneft in pipeline construction projects. These financial deals, combined with Russia’s historically robust partnership with Kuwait and increasingly close ties with Bahrain, have expanded Russia’s economic presence in Saudi Arabia’s backyard.

Despite a significant uptick in economic cooperation between Russia and the Gulf states, Moscow has struggled to develop reliable security partnerships in the GCC. These alliance-building struggles have caused many Saudi policymakers to view Russia as a marginal player in the Gulf. In a recent interview with GMU Professor Mark Katz, a leading expert on Russia’s Middle East strategy, Katz told me that before the Syrian crisis, Saudi Arabia viewed Russia’s policy in the Gulf as entirely mercenary. Therefore, many Saudi policymakers believed that they would be able to get Russia to comply with Riyadh’s preferences simply by outbidding Iran as a trade partner and purchasing Russian arms.

To demonstrate to Saudi Arabia and the international community that Russian diplomatic activities in the Gulf are not solely motivated by Moscow’s economic interests, Kremlin policymakers have actively engaged GCC countries on achieving a political resolution to the Syrian conflict that aligns with Russian objectives.

Oman and Kuwait are the GCC states that have been most willing to seriously consider Russia’s proposal for a political solution to the Syrian conflict that includes Assad. Oman’s position can be explained by its long-standing use of mediation to maximize its regional influence. Omani foreign minister Yusuf bin Alawi’s October 26 meeting with Assad, and the country’s active support for a U.S.-Iranian thaw during last year’s nuclear-deal negotiations, reveal how Muscat can increase its international status through diplomacy. While Oman remains a peripheral actor in the Gulf, the support of any GCC country is a victory from Russia’s standpoint, as it adds to a growing coalition of Arab League countries favoring a political solution in Syria.

Kuwait has carved out a unique role in the Syrian conflict by adopting a stance that meets both Saudi Arabia and Russia halfway. In line with the GCC consensus, Kuwait has expressed solidarity with Syrian rebel groups. As Daniel DePetris noted in a July 2013 article for the National Interest, Kuwaiti private donors have provided enthusiastic support for anti-Assad forces in Syria. But by mid-2015, Kuwait had also aligned with Russia by supporting an all-inclusive political solution to the Syrian conflict and implicitly criticizing Riyadh’s belligerent anti-Assad approach.

Even though the UAE’s stance on Syria has at times been ambiguous, Russia has made some progress towards achieving a Kuwait- and Oman-style bargain with Abu Dhabi. On June 3, 2016, the UAE’s Federal National Council speaker praised Russian foreign minister Sergey Lavrov’s active role in promoting peace negotiations in Syria. Senior UAE officials have also expressed openness to a settlement involving all major political actors in Syria, including President Assad. Abu Dhabi’s shift in position differs strikingly from Saudi policy in Syria, and demonstrates Russia’s ability to pry GCC states away from Riyadh’s hegemony.

By diplomatically engaging Oman, Kuwait and the UAE on Syria, Russia has created a coalition to balance against the Saudi-Qatari bloc that dominates the GCC. As escalated Russian diplomatic activity in the Gulf has corresponded with Moscow’s strengthening of ties with Algeria, Iraq and Egypt, Putin has attempted to shift the Arab League consensus in Russia’s favor. Should he succeed, Saudi Arabia and Qatar could risk regional isolation if they do not moderate their intransigent opposition to Assad.

To heighten this perception of Saudi isolation, Russia has attempted to strengthen its diplomatic relationship with Bahrain, even though Manama has effectively become a client state of Saudi Arabia. Bahrain’s willingness to risk reproach from Riyadh by signing arms deals with Russia, and openly negotiating with Putin on counterterrorism, is a powerful symbolic victory for Moscow. It also demonstrates that Saudi Arabia’s hegemony over its GCC allies is more fragile than it appears.

Saudi Arabia’s desire to set, rather than operate outside, the Arab League consensus on Syria could force King Salman to make diplomatic overtures towards Russia and soften his support for a swift overthrow of Assad. The process towards reconciliation between Russia and Saudi Arabia will likely be gradual, as Riyadh still distrusts Russian intentions. Many Saudi policymakers viewed Moscow’s decision to militarily intervene on Assad’s behalf with Iranian support in September 2015, as the ultimate betrayal. Saudi Arabia’s animosity towards Russia can be explained by the fact that Russia’s military actions occurred just weeks after comprehensive negotiations between Moscow and Riyadh. However, if it appears as if the Arab League consensus has swung in favor of an all-inclusive political solution to the Syrian conflict, Saudi Arabia could put these grievances aside and compromise with Moscow.

Should Saudi Arabia be willing to moderate its views on Syria, Russia will likely take steps to thaw its relationship with Riyadh. Instead of the military showdown that has often been predicted, Russian-Saudi relations are likely to transition into a cold peace for two reasons.

First, Russia’s recent dialogue with the United States on joint air strikes against Jabhat al-Nusra risks creating frictions between Moscow and Tehran. Iran is strongly opposed to conducting joint counterterrorism operations with the United States in Syria. Should U.S.-Russian cooperation against Nusra become a reality, Moscow will likely coordinate its military activities closely with Turkey. If Ankara softens its opposition to Assad and compromises with Russia in Syria, Saudi Arabia’s geopolitical position will erode considerably.

As New York-based RIAC expert Nikolay Pakhomov noted in May 2016, Saudi Arabia and Turkey have collaborated so extensively in Syria that they have even worked together in uniting jihadist groups under the Jaish al-Fatah (Army of Conquest) umbrella. As Saudi military efforts in Syria have relied extensively on Turkish assistance, Saudi Arabia is unlikely to retaliate against Turkey’s pivot towards Russia by unilaterally bolstering its financial support for Nusra. Saudi Arabia’s unwillingness to jeopardize its vital partnerships with the United States and Turkey could cause Riyadh to enter a cold peace with Russia by default.