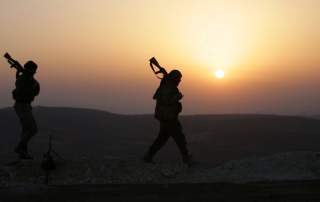 In early December Vladimir Putin announced the withdrawal of the majority of Russia’s military presence from Syria. Though he has made similar announcements in the past, there is mounting evidence that major military operations are nearing their end. Two years have passed since operations began—and it is time to take stock of Russia’s achievements.

The primary goal of the Russian intervention was to protect Bashar al-Assad from regime change—this necessitated degrading U.S.-backed irregular forces, and later transforming the character of the conflict. In short order, Russia secured a long-term presence and improved a once decrepit naval facility in Tartus, as well as assisted regime forces in the recapture of vast swaths of Eastern and Southeastern Syria. Finally, while far from being the primary objective of Russia’s intervention, it contributed to the degradation of ISIS forces in Homs and Deir ez-Zor governorates.

Once the Russian military achieved those goals, the Kremlin began to value Syria as diplomatic leverage, positioning Russia as the linchpin in negotiations about Syria’s political future. Moscow also demonstrated a commitment to defend its allies and the capacity to conduct large-scale anti-terror operations. Russia’s surprisingly adroit use of expeditionary military power has challenged many existing geopolitical-power structures in the Middle East. Going forward, as Nicholas Heras, a noted expert on the region, put it: “from their base in Syria, the Russians can continue to seek to project influence into the wider Middle East.” Further, Moscow’s military deployments and procurement strategy indicate that it is committed to the region for the long-term.

Prior to Russia’s entry into this civil war, the Syrian government was caught on a defensive footing on numerous fronts—including the stalemated Battle for Aleppo, stagnated offensives against rebel-held neighborhoods in Damascus, forces encircled at Deir ez-Zor and a slow campaign in the Southern Front. Though regime collapse was unlikely, it was clear that the Syrian Army lacked the capacity to recapture major cities, such as Aleppo, while supporting major operations elsewhere in the country. For this reason, the first phase of Russia’s air campaign was concentrated in northern Syria, rather than on ISIS forces in eastern Syria. Backed now by Russian air power, regime forces successfully recaptured significant amounts of territory, relieving pressure on regime strongholds in major cities. However, operational cooperation between the Russian military and the Syrian Army remained far from harmonious.

The dissonance between the Russians and the Syrian Army was highlighted by the embarrassing surprise recapture of Palmyra by ISIS in December 2016. Just months earlier, the ancient city had been the site of an elaborate—and widely propagandized—concert conducted by Putin ally Valery Gergiev. Other incidents, such as the multi-year siege of Deir ez-Zor, have demonstrated the limitations of Russian air-power as the Syrian air-base there was nearly overrun on a number of occasions despite large-scale Russian Air Force operations. Similarly, Russia’s air power in Aleppo failed to translate into immediate tactical success and lasted fourteen months.

It should be noted that Russia’s battlefield successes did not take place in a vacuum—they benefited substantially from U.S. Combined Joint Task Force-Operation Inherent Resolve operations against ISIS in Iraq and Syria. The transformation of Syrian Democratic Forces into a capable fighting force in northern Syria also contributed to the reduction in ISIS held territory. Significant regime victories, including the capture of the rebel-held neighborhoods of Aleppo in December 2016, can also be attributed in part to internal divisions within the Syrian opposition—and in particular to its inconsistent military effectiveness.

The final shape of a political settlement in Syria is still far from certain. Of primary concern is the now ongoing Turkish incursion into the Afrin region of northern Aleppo. Turkey has thrice now deployed its forces into Syria, attempting to undermine Kurdish efforts to consolidate a base of power or establish a proto-state of their own. Russia had previously deployed its forces in the area and promptly withdrew at the outbreak of hostilities in Afrin—signaling what might amount to a  failure of the force intended to act as a deterrent against a Turkish attack on Kurdish forces. Should violence continue between the Turkish armed forces, their proxies, and the Syrian Democratic Forces, the war could be severely prolonged.

Second, Syria’s Idlib province remains a rebel-held stronghold and is the bulwark of the remaining opposition. Rebel forces in Idlib have become a hodgepodge of Free Syrian Army remnants and Jihadists groups, including Syrian Al Qaeda affiliate Hayat Tahrir al-Sham, formerly known as Jabhat al-Nusra. While the radicalization of opposition forces there might encourage military solutions, both Russia and the United States favor resolving the Idlib problem via the Astana Talks format. Hayat Tahrir al-Sham is notably absent from the opposition’s diplomatic efforts as a designated terrorist organization. Military operations, including a Russian air campaign over Idlib and parts of northern Hama, continue—and there have been some recent indicators that sustained efforts will not come without a cost.

Finally, though the regime has recaptured many of Syria’s largest cities and its most important regions, these territories are now devastated by war. The Syrian government will soon face the difficult challenge of reconstruction, which will be fraught with domestic political challenges. It also remains unclear how Syria will finance such a program. If mishandled, the reconstruction efforts could risk reigniting violent unrest and could fail to address the root causes of the civil war, leaving the door open for future violence. Moscow will be inclined to accept western contributions to this reconstruction effort, as Russia lacks the necessary resources to rebuild Syria but continues to fear the rise of extremist groups. Indeed, last month, Russia’s Hmeimim air base was attacked by mortar fire and drones that caused more damage to the Russian air force than it has sustained in decades. These attacks underscore the lack of military capacity posed by the Assad regime, and, accordingly, the significant amount of Russian military posture that will be needed to protect its newly established military presence in the Levant.

There is little doubt, however, that Russia will try to parlay its military successes into a diplomatic bargain that offers the Kremlin implicit control of Syria’s political destiny. Whether or not Russia’s leadership can translate victories on the battlefield into long-lasting influence in the region remains to be seen, as significant stumbling blocks remain.

William McHenry is the Program Associate at the Program on New Approaches to Research and Security in Eurasia (PONARS Eurasia). He holds an M.A. from American University’s School of International Service and tweets at @wmchenry.

Gabriel White is a graduate student at American University’s School of International Service pursuing an M.A. in International Security. He is 2017 a recipient of the NSEP Boren Fellowship and works on Baltic regional security issues in Tallinn Estonia. He tweets at @Gabriel___White.

This article was first published by the Small Wars Journal.