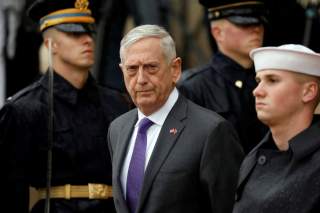 Upon news of President Donald Trump’s decision to withdraw all American troops from Syria, the foreign policy “Blob” in Washington, D.C., has gone into high gear with shrill opposition. One neoconservative leader pronounced, for example, “With a single tweet, Trump destroys U.S. policy in the Middle East.” That seems like an odd conclusion to this author. What policy is there to destroy exactly? Chaos reigns in much of the region, except those parts generally ruled over by brutal dictators of the type that like to dismember journalists. There hasn’t been genuine progress in the Peace Process for decades. More to the point, the United States has lost much blood and treasure in three successive failed wars in the region. Further, the “victory” that featured smart bombs against some “bad dudes in pickup trucks” (aka ISIS) hardly feels like a consolation. Never mind that U.S. operations in Syria never had a legal basis of any kind, whether in international law or in the U.S. Constitution. Such concerns are so awfully quaint, so the conventional wisdom has it.

The only sense that the “Blob” could make of the chaotic situation in Syria is that, of course, if the United States is leaving, that must be good for Russia, right? And what’s good for Russia is clearly bad for America, right? Wrong on both counts, actually. As it turns out, there was surprisingly little gloating going on in the Russian media over the last few days. That is likely the result of the fact that many Russians could be scratching their head about the nature of the Russian “victory”—so many lives lost and for what prize exactly: the honor of pacifying and rebuilding the shattered, “[expletive] hole” known as Syria. Even if Moscow is quite unable to pull a “rabbit out of this hat,” the Syrian people are still likely to be significantly better off if the civil war comes finally to an end, no matter under what flag. Indeed, the cynical position of the “Blob”—that the civil war should continue indefinitely—is callous in the extreme and ignorant of the desperate plight of the people on the ground.

We can only suppose, moreover, that the same members of the “Blob” want U.S. forces to stay in Afghanistan, bleeding for another eighteen years? The cautious and upstanding General James Mattis will be missed, but was he perhaps too cautious? In the midst of the crisis on the Korean Peninsula, that caution has been utterly essential, but what about in reforming U.S. strategy as a whole? Perhaps not. To peek behind the curtain of the unfolding “New Cold War,” this edition of Bear Cave takes an early look at how Russians are viewing the news of Mattis’ departure. Does the change of Pentagon leadership open the door wide for Kremlin military expansion and enhanced “meddling” throughout Europe and the Middle East as implied by recent media coverage?

An early report from Izvestiya explains some of the American President’s reasoning that the U.S. media seems to have forgotten: “… America has no reason to risk the lives of its soldiers and waste millions in budgetary resources [Америке незачем там рисковать жизнями солдат и тратить миллионы долларов бюджетных средств].” The Russian journalist may well have also aimed this line at his own country’s leaders, who are after all even more deeply caught in the Syrian morass. This Russian article then cites a British news source explaining that America is negotiating a troop withdrawal with the Taliban: “In exchange, Washington hopes to maintain three military bases in Afghanistan that America needs to counter the influence of China and Russia in the region [В обмен на это Вашингтон рассчитывает сохранить в Афганистане три военные базы, необходимые Америке для противостояния влиянию Китая и России в регионе]. That is the first explicit linkage this author has seen in the Russian media that directly links Afghanistan policy to the new Cold War—a disturbing trend to be sure. The article quotes the appraisal of Andrei Kortunov [Андрей Кортунов], the executive director of the Russian Council for International Relations. Kortunov takes a rather balanced view, noting that Mattis frequently “limited Trump’s aggressive impulses and avoided the excessive use of force.” However, Kortunov also notes that Mattis counseled hard-line positions on Ukraine, the North Atlantic Treaty Organization, and Afghanistan.

The article additionally quotes the assessment of Konstantin Kosachev [Константин Косачев], a Senator in the Federation Council and chair of the International Relations Committee. Kosachev contends that the retirement of Mattis could be viewed a relatively “positive” signal, since it may indicate that Trump disagreed with Mattis’ insistence on confrontational relations with both Russia and also China, and the President may also wish to further scrutinize deployments of U.S. troops overseas. Demonstrating an impressive familiarity with American politics, this Russian article notes that only a few months ago, the President had chided Secretary Mattis as being “a Democrat.” There is also an awareness of the disturbing militarization of American foreign policy thinking under the period when Trump governed with “his generals [своими генералами]” that may now be coming to an end.

The piece concludes that Trump’s current maneuvers may constitute an early effort to gain voter support before the 2020 elections. With impressive objectivity, it is observed that while the President should reasonably hope to unify his team behind key policies, but that, at the same time, in losing Mattis “… Trump, in fact, forecloses the possibility to hear non-standard conclusions or a critical assessment, and therefore, [the Administration’s] decisions will increasingly be guided by the sole, sometimes somewhat one-sided opinion and recommendations of advisers… [Трамп, по сути, лишает себя возможности услышать нестандартное заключение или критическую оценку, а стало быть, в своих решениях будет всё больше руководствоваться единоличным, подчас несколько однобоким мнением и рекомендациями советников]”

In a similar piece that was carried in Nezavisimaya Gazeta, the same quote from Russian Senator Kosachev is also discussed. This article likewise cites the opinions of U.S. congressional leaders, including Senator Mark Warner and House Speaker Nancy Pelosi. Warner is quoted saying Mattis’ retirement “is terrible” [Это страшно] and Pelosi’s comment is also noted that “We all need to be worried now [Все мы должны быть обеспокоены в настоящее время].” Senator Marco Rubio is then quoted at length, suggesting that Mattis’ retirement “makes it quite clear that a number of serious political mistakes are expected that will put our country at risk, damage our allies and empower our opponents.” While this article notes that Russia “will have to act in Syria without looking at the U.S. [придется действовать в Сирии, не оглядываясь на США],” it is hardly suggested that this is a “win” for Moscow. There even seems to be a small hint of nostalgia in the comment, reflecting perhaps the notion that Syria now represents an awfully large responsibility for Russia to bear on its own.

The Syrian Civil War is not about to end. However, the departure of U.S. forces may well signal the beginning of the end. Now, diplomatic maneuvers among the main players with genuine interests at stake, including Turkey, Iran, Israel, Saudi Arabia, and yes Russia may commence in earnest. That Moscow gets along reasonably well with each of these regional players suggests that there is a decent (if not more) of a chance now for peace. Even if the U.S. decision does not point directly toward peace, it does imply that Washington will no longer play the role of “spoiler” and thus follows the important medical dictum of “do no harm.”

There is little to no evidence to suggest that Moscow can impose its will on the wider Middle East, let alone the narrow situation of Syria. Rather, the Kremlin faces the complex task of trying to work with all the regional players. Americans should be happy that their soldiers are coming home and out of harm’s way, and that the various “shenanigans” which have frittered away hundreds of millions of taxpayer dollars in Syria will finally come to an end. Let us hope the same arguments against fraud, waste, illegality and peripheral U.S. interests will bring about a courageous decision to decisively end America’s costly and calamitous intervention in Afghanistan as well.

Far too many mistakes have been made in America’s Middle East policies in the last two decades to keep track of—including the latest series of blunders related to the grotesque Khashoggi affair. However, Americans should also celebrate the rare circumstances in which a correct decision has been made. Such is the case with Trump’s ruling that U.S. operations in Syria should come to an end immediately.