How Russia Would Strike Back if America Launches "Dollar" Sanctions 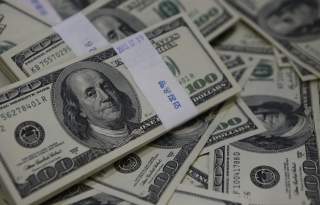 Since Russia’s annexation of Crimea, the United States has instituted numerous sanctions on Moscow. Russia typically ignores or even mocks these American sanctions. That recently changed though.

In response to proposed Senate legislation that would target Russia’s state-controlled banks by freezing their access to dollars—a step which could genuinely damage the Russian economy—Moscow issued a new threat. “If we end up we end up with something like a ban on banking activities or the use of certain currencies, we can clearly call this a declaration of economic war,” Russian Prime Minister Dmitry Medvedev stated, emphasizing that Moscow would “respond to this war. By economic means, by political means and if necessary by other means.”

While the Senate’s desire to punish Russia for its election meddling, its war on Ukraine and its poisoning of a former Russian spy in Britain is understandable, Medvedev’s comments indicate that Moscow may see the imposition of dollar sanctions as crossing red line. Although Medvedev did not elaborate on what exactly a response by “political” or “other means” might entail, U.S. policymakers should be prepared for the Kremlin to retaliate against American interests in any number of possible ways.

First, Russia might respond in cyberspace. Microsoft recently reported that hackers tied to the Russian military already launched so-called “spear-fishing” campaigns against three candidates already running in the 2018 elections. Additionally, Director of National Intelligence Dan Coats argued that Moscow remained committed to undermining American democracy, warning that the “system is blinking. And it is why I believe we are at a critical point.”

Moreover, while Russia reportedly hasn’t yet hacked into actual state-level election systems, Moscow targeted this infrastructure in 2016. And as election security experts have warned, Russia might even possess the ability to materially influence the outcome of the 2018 elections. Given the antipathy between Republicans and Democrats, if control of the House or Senate were at stake, it's easy to imagine how this could lead to mass confusion, multiple lawsuits and the type of partisan hostility that would make the 2000 Bush versus Gore Florida recount look like a walk in the park.

The Kremlin could also respond with nuclear saber rattling. During Putin’s March speech to Russia’s Federal Assembly, he announced the development of several new nuclear missiles, while also playing a video simulating a nuclear attack on Florida. It would be easy for The Kremlin to heighten tensions by upping its nuclear rhetoric again. More concretely, the Russians might decide to formally withdraw from the 1987 Intermediate-Range Nuclear Forces (INF) Treaty and/or refuse to entertain an extension of the New START Treaty. These steps might represent the starting gun for a new nuclear arms race.

Moscow might also escalate its war against Ukraine. For example, Moscow could move additional Russian troops and weaponry into Eastern Ukraine's Donbass region to increase military pressure on Kiev there. Alternatively, Russia might also move to take full control of the Sea of Azov. Moscow has reportedly deployed forty of its naval vessels in the Sea of Azov, and Russian forces continue to stop and harass both Ukrainian and international merchant ships traveling through the Azov to Ukrainian ports. Ukraine has increased its naval patrols in response, and it's easy to envision Russia provoking an armed confrontation in the Sea of Azov that could serve as a pretext for a significant Russian military escalation in the region—a step right out of Moscow's 2008 playbook for its war in Georgia.

Russia could also increase military tensions elsewhere in Europe as well. It could for example move nuclear-armed missiles into Kaliningrad, a Russian enclave that borders Poland and Lithuania. Alternatively, Russia could use Kaliningrad as a base for large-scale military exercises that simulate an attack on NATO’s Baltic members and involve occupying the strategic Swedish island of Gotland in the Baltic Sea.

Putin doesn’t even need to rely on his military to harm American interests either. He could choose to openly increase economic and political support for North Korea, thereby weakening Washington’s ability to pressure North Korea to curtail its nuclear program. Given that North Korea remains on the cusp of being able to reach the continental United States with a ballistic missile this would constitute a significant setback for American interests.

To be clear, Medvedev's threats may be mere bluster, and Moscow could respond to dollar sanctions by hunkering down even further and try to ride out the economic and political storm. However, if harsh sanctions were on the verge of causing the Russian economy to collapse—especially if this resulted in unrest which threatened the stability of the Putin regime—Moscow might well end up lashing out in unpredictable ways. American policymakers should be forewarned and prepared.

Josh Cohen contributes to a number of media outlets including National Interest, Foreign Policy, Reuters, Washington Post and others.