How to Save Sudan's Democratic Revolution 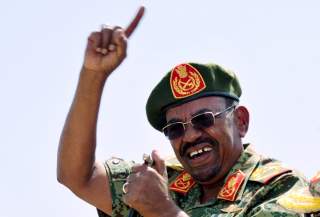 During the past several months there has been a democratic uprising in Sudan, which forced long-term authoritarian leader General Omar al-Bashir out of office. The uprisings targeted corrupt regime with a search for establishing a democratic rule with elections, freedoms and good governance. Almost 70 percent of the protestors were women, who faced decades of oppression and exploitation more than anyone else in Sudanese society. The expectations were high when Bashir was put into prison and replaced by his own team of generals. Protestors wanted to transfer to civilians the authority of the Transitional Military Council (TMC) to create a democratic Sudan that they proudly risk their lives for.

However, such a democratic transition is rare if it is even possible. Although TMC’s attitude about negotiations with the civilians appeared to be elite defection from the ruling strata, the powerful generals had a different idea for the transition period. Gen. Abdel Fattah al-Burhan and Gen. Mohamed Hamdan Dagalo have control in the country and want the civilians to end protests. They want to hold elections under their administration. This is what civilians do not want so far since they have the case of Egypt in mind. Egyptian president General el-Sisi took Egypt to the elections, oppressed the protests during and after the elections, and established a regime—one that is not much different than during the rule of former Egyptian leader Hosni Mubarak. The popular slogan “Either victory or Egypt” reflects this concern among the protestors.

The council declared the sit-ins illegal and described them as a “threat” to national security. Sudanese armed forces attacked protestors in Khartoum and other places brutally, killing more than one hundred and injuring five hundred on June 3. The council considers this attack as a legitimate security move since they promised to hold elections in nine months under their military rule. The council controls state media and blocks Internet. However, its control over the media could not prevent dissemination of heart-breaking scenes of violence against peaceful civilian protests, i.e., beaten protestors, dead bodies thrown to Nile, bloody scenes of injured civilians.

There are two reasons for this quick transformation from political stalemate to violent crackdown in Sudan. First, TMC’s control over the armed forces, in particular, the Rapid Security Forces headed by General Hamdan, empowered it against the civilians. These forces include thousands of militiamen, which grew out of Janjaweed forces used for regime crimes in Darfur. This paramilitary group is responsible for the crackdown on June 3. Second is the regional support they received from Saudi Arabia, United Arab Emirates and Egypt. General Burhan met President el-Sisi in Cairo and the UAE’s Sheikh Mohammed bin Zayed Al Nahyan in Abu Dhabi. Also, General Hamdan met with Muhammad bin Salman in Riyadh. They secured an aid package of $3 billion to strengthen TNC during the visits. The regional and international profile of Saudi and UAE rulers—and their backing of the TMC—is game changer in Sudan.

Almost as a recognition of their role in supporting TMC in Sudan, the under secretary of state for political affairs, David Hale, reached out to Saudi deputy defense minister Khalid bin Salman and the foreign minister of UAE, Anwar Gargash. Dale underlined “the importance of a transition to a civilian-led government in accordance with the wishes of the Sudanese people” in his talk to them. This is an expression of a concern to two U.S. allies in the region and a difference of opinion on Sudan.

Saudi and UAE have invested heavily in Sudan and are likely to have influence on future Sudanese government. However, they like to manage the transformation of the country to prevent civilian rule in Sudan. Their desire is also shared by regional ally Egypt. The Saudi-UAE intervention in Sudan is also related to their plans for regional design from Yemen to Libya. They would like to eliminate the ability of Turkey and Qatar, their regional rivals, to play a role in Sudan. Turkey and Qatar sided with the popular uprisings during the Arab Spring, supported General Haftar in Libya, and resisted against the Saudi-UAE blockade against Qatar for two years. Turkey and Qatari rapprochement with Bashir before the revolution was a serious concern for Saudi-UAE rulers. In addition, it is for their best interest to keep Sudanese military support in Yemen. General Burhan oversees almost ten thousand Sudanese ground forces in Yemen.

Despite discussions about a democratic transition, there has been no visible U.S. diplomatic activity in the country to date. The diplomatic role seems to be deferred to Ethiopia. The appointment of former Ambassador Donald Booth as Special Envoy for Sudan is a welcome development. His involvement in the crisis will raise trust to the United States among the civilians. The U.S. role is vital for a political solution to the current crisis before the situation creates chaos in the region.

The United States has had complicated relations with Sudan and maintained sanctions against this country for a long time. Khartoum was bombed by the Clinton administration in 1998 over allegations of Al Qaeda support. President George W. Bush did not hesitate to break the U.S. policy and supported an indictment by the International Criminal Court in an effort to bring Bashir to justice. The U.S. commitment to bring Bashir to justice did not generate international support for this cause. During this period of time, the U.S. role was instrumental in signing of 2005 comprehensive peace agreement between South Sudan and Sudan, which paved the way for independence of former in 2011. Thus, the United States should not turn his back to Sudan after Bashir is removed from office. There is a vital role that the United States can play during the political settlement and its aftermath. The United States is the only actor, which can bring the African Union, the European Union, Gulf countries and Egypt to the negotiation table. There are different priorities and perspectives that should be negotiated by the U.S. third party intervention. The United States should also be involved in the reconstruction of economy in Sudan and the creation of peace dividends.

The United States and the UN have, in the past, found success in Sudan. It is now time to take that success to another level. In this scenario, the U.S. would play the leading role for a constructive Africa-EU-UN position and limit ambitions of regional actors. Such a pre-emptive act of normalizing Sudan will certainly pay off in the form of international security. Most importantly, the U.S. role in this crisis would be to support a democratic transition.

Bulent Aras is a visiting professor at Rensselaer Polytechnic Institute and a senior scholar at the Istanbul Policy Center.