How to Save Taiwan from Itself 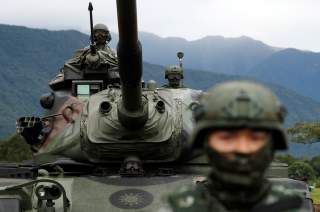 TAIPEI—Taiwan is not Israel. The frontline islands of Kinmen and Matsu are not the “frontline.” The Air Force’s IDF, the Indigenous Defense Fighter, is locally called the “I Don’t Fly” fighter.

There is a large-scale masquerade ball on the island of Taiwan; a façade that will quickly crumble when the first arrows are drawn from the enemy’s quiver.

Living here for twenty years and having been on every military base on the island too many times to count, paradox and irony have become cliché, if not horrifying.

Not to crow, but I have been on Dongyin, Erhtan and Tatan islands; the U.S. signal intelligence antenna farm at Pingtun Li; and inside the underground airbase in Chiashan Mountain in Hualien.

So, please hear me out.

Washington must concoct a way to convince Taiwan’s idealistic idle chattering political elites to stop believing in the fantasy that American troops will swing-in like Tarzan and save them from the tiger—especially with the current destabilization of American political culture.

Taiwan’s military brass are very cognizant of the China threat; it is Taipei’s political leadership that has forced the military to reduce military readiness over the past twenty years. Public lethargy and a lack of confidence in the military has drained the armed forces of manpower and morale. And it is this lethargy, along with the unwillingness of Taiwan’s political elites to communicate this imminent threat to the public, that must be addressed.

Taiwan’s military wants to procure big-ticket items from the United States, but at the same time it has been forced to reduce conscription and training due to funding issues and an apathetic civilian population.

Taiwan’s Air Force just announced an official request from the United States for sixty-six F-16V fighter aircraft; the Army has secured the sale of M1 Abrams main battle tanks; and the Navy has gone forward with the initial procurement of the Mark 41 Vertical Launch System (VLS) for its upcoming local-build corvettes. The VLS will be fitted with the Tien Hai (Tien Kung variant) surface-to-air missile.

Even if Taiwan procures all of its dreams and desires from the U.S. government, then the question becomes: who will fly them, drive them, sail them and fire them.

According to the Ministry of National Defense (MND), the current estimate of personnel officially stands at 215,000. Many critics argue that this is the bare minimum needed to repel the first wave of a Chinese invasion.

Now remember, that is the minimum.

The reduction to 215,000 was the result of the 2011–2014 Jing-cui streamlining program, which was extended to 2015. Fortunately, the follow-up Yung-gu plan was canceled. It would have further reduced the number from 215,000 to 175,000 and eliminated conscription entirely, opting for an all-volunteer force.

Even though Yung-gu is temporarily on hold, the official current number, 215,000, is an outright lie. The actual number of operational active duty personnel is devastating.

There are actually only 188,000 in total and if you exclude civilian employees, noncombat personnel, those on leave, and cadets, the actual number of warfighters is 152,280; 81 percent of the authorized strength levels needed for fending off an invasion.

Part of the problem is conscription and a decline in patriotism.

Those born before 1994 were required to serve one-year conscription, but it dropped to four months in 2016 when that generation turned eighteen. Since the end of year-long conscription service, the military has been relying on personnel from the four-month program to fill in at least 10 percent of the frontline strength.

Conscripts now receive five weeks of basic training and eleven weeks of specialized training. This will average about five turnovers per year for individual field units. They are also counted as active duty personnel, despite their lack of real contribution to the overall warfighting capabilities of the island.

Taiwan’s Ministry of Foreign Affairs just announced a $100 million gift to Nicaragua; one of the numerous corrupt regimes with which Taiwan trades diplomatic status and recognition for dollars. Yet, at the same time, it continues to cut the number of bullets, all manufactured locally, to be used for infantry training. It’s worth noting that $100 million buys a lot of bullets.

During annual exercises, individual companies in the infantry, now down to skeleton crews, must borrow heavily from other companies to fill gaps needed to carry out what have become dog-and-pony shows for the media.

To handle anything beyond the first wave of the invasion, the military reasons that it can dip into its 1.5 million reserves, but the effectiveness of such mobilization relies largely on the backbone of a small but elite core of trained personnel.

Officially, reservists are required to spend only five days every two years for training, during which time they typically perform simple chores and not weapons training. However, the MND might never contact an individual reservist due to a variety of reasons, including critical missions, budgetary constraints, reservists refusing to comply, failure to simply locate and notify reservists, etc. One MND source told the National Interest that the ill-trained reserves were nothing more than “cannon fodder.”

Requirements for weapons are driven by outdated estimates going back ten to twenty years for a military that will fight a conventional war in the air, on land and at sea. Requirements set by generals who have long since retired.

After all, colonels do not become generals by pushing reforms and upgrade programs—despite their cost-effectiveness. They score shiny, new stars for procuring bright shiny objects at several times greater cost.

China will destroy Taiwan’s air bases with its stockpile of 1,300 short-range ballistic missiles, satellites with infrared will locate tanks for its fighter aircraft, and its vast array of hundreds of anti-ship missiles and submarines (over sixty) will sink its warships. This will be in the first three or four days, according to modeling.

Anyone suggesting Taiwan’s ennui over a Chinese invasion is a new problem would demonstrate a lack of institutional memory, if not idiocy.

When Taiwan first procured 150 F-16A/Bs in the 1990s, it badgered, ranted and whined about Washington’s refusal to release the AIM-120 AMRAAM’s for its F-16s, yet when they were released in 2004, the initial order was only for 200, then cut to 120. Critics complained Taiwan’s military was the only one on the planet that would procure 120 bullets for 150 guns. The Air Force procured more over the years, 218 in 2007, but its reputation was badly damaged.

As a general rule, Taiwan has about one-third to one-half of the munitions it needs for two-days of aerial combat; it plans to place an emergency order with the United States when a war is on the horizon. In 1996, during the height of the Taiwan Strait Missile Crisis, emergency orders were sent to Washington for a wide array of missiles and bombs, but quickly canceled when the crisis ended.

How to change this persistent charade is not for Washington to send more think-tank types pontificating on the island. Based on my discussions with MND, they can no longer tolerate any more advice from analysts and pundits visiting for only a week at time to give unwelcome—and often moronic—advice to them.

The MND has already suffered through numerous academic recommendations that include preparing a guerrilla army to continue the fight after the invasion. There was also the so-called “porcupine strategy” that the MND finally dismissed as a Washington prank.

The MND is so annoyed by the endless parade of DC wonks, think-tank types, and pundits, it has created the Institute for Defense and Security Research (INDSR) as a buffer. The organization successfully baffled RAND visitors recently during an entire day of questioning that went nowhere, and good riddance, they say.

It has to be the White House, not just the Pentagon, that has to "get medieval" on Taiwan’s political elites who no longer heed warnings from their own military.

Taiwanese, all by themselves, must accept the fact they will have to get waist deep in the primordial ooze to defeat an invasion.

The United States must begin a tough in-your-face dialogue with both political parties on pragmatic boots-on-the-ground issues before time runs out.

This engagement cannot simply be left to America’s diplomatic presence in Taiwan. And, please, no more government funding of moronic think tank reports needed, thank you very much.

Wendell Minnick is an author, commentator, journalist and speaker who has spent two decades covering military and security issues in Asia, including one book on intelligence and over 1,200 articles. From 2006–2016, Minnick served as the Asia Bureau Chief for Defense News, a Washington-based defense weekly newspaper.