How to Save U.S.-China Ties 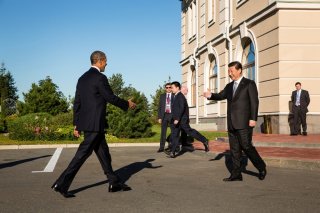 China’s large-scale construction of artificial islands in the hotly disputed waters of the South China Sea has led many in Washington to call for a tougher stance against Beijing. While China no doubt bears much responsibility for pursuing murky and ambitious territorial claims with aggressive actions, contending with China’s rise also requires a lot more than just getting tough.

During the course of the Obama administration, Beijing has reacted negatively not just to the administration’s gestures of goodwill but also to its more confrontational actions and rhetoric. A look back at the missteps early in the Obama administration would offer a useful guide to prescribing future action. The China Challenge: Shaping the Choices of a Rising Power, a new book by noted China scholar Thomas Christensen, provides precisely such a guide.

Presenting a wide-ranging look at Sino-American relations under multiple U.S. presidents, Christensen’s book makes clear the Obama administration started on the wrong foot when it employed rhetoric not backed up with facts for political convenience. Most notably, in July 2009, Secretary of State Hillary Clinton declared on a trip to Asia, “The United States is back,” and implied not so subtly that President Barack Obama’s predecessor, George W. Bush, had squandered U.S. resources on wars in the Middle East and neglected important developments in Asia.

The Obama administration’s self-serving rhetoric was not simply inaccurate but also harmful to bilateral relations. Instead of emphasizing America’s longstanding presence in Asia, the administration fueled common narratives in China that America was returning to the region to contain China’s rise.

If creating undue alarm in Beijing was not bad enough, the Obama administration also proceeded to overpromise U.S. accommodation of Chinese interests. In 2009, then-Deputy Secretary of State James Steinberg emphasized the need for “strategic reassurance” in Sino-American relations and declared that each side must “take specific steps to address and allay each other’s concerns.” Before the end of that year, the United States would agree with China—in a joint statement—that the two countries would respect each other’s “core interests.”

The problem, as Christensen points out, was that U.S. policy did not and does not unquestionably support China’s core interest of continued one-party Communist rule. Nor does the United States side with China on its core interest of sovereignty and territorial integrity, especially when it comes to Chinese disputes with U.S. allies and partners like Japan, the Philippines and Taiwan. When the Obama administration subsequently—and rightfully—pushed back against Beijing on China’s human rights practices and aggressive assertions of territorial claims in Asia, many in the Chinese leadership felt duped and not at all reassured.

By the time that Washington formally announced a “pivot to Asia” in 2011, Beijing had plenty of reasons to worry that the United States was pivoting to interfere with China’s territorial claims, encircle it with America’s friends and generally thwart China’s great-power ambitions. In response, instead of reducing its provocations, China has pushed back harder against America’s presence in Asia and ramped up maritime disputes with U.S. allies and partners. And Beijing has blamed the pivot to Asia as the biggest culprit for the deterioration in regional tensions.

Having made a number of early mistakes with China, the Obama administration has attempted to right its course and Christensen gives it due credit for having renamed the “pivot” the “rebalance,” abandoned the policy of “strategic reassurance,” stopped expressing respect for China’s core interests and firmly reiterated its commitments to allies in Asia. Nevertheless, the diplomatic damage had been done, and China’s bellicose rhetoric and actions now erupt regularly despite U.S. pressure and protests.

Certainly, Beijing believes its actions further its strategic aims, but molding China’s behavior takes much more than a willingness to do that which Chinese leaders do not like. Indeed, Christensen argues that what is required for sound U.S.-China policy is “constant management of two rather contradictory imperatives: the need to maintain a reputation for resolve and physical strength while at the same time making clear that the purpose of the U.S. presence and alliance system in the region is not to contain China’s economic growth or political influence on the international stage.”

This prescription is a whole mouthful and does not lend itself a punchy headline. But it reflects the reality that China is complicated and the challenges it poses have no easy solutions. Christensen’s formula would call for a “get tough” posture that maintains a strong U.S. military presence in Asia, challenges Chinese maritime claims derived from artificial islands with military aircraft flybys, and increases military cooperation with allies and others in Asia who have been unnerved by China’s provocative actions.

At the same time, Christensen supports existing U.S. efforts to reassure China of U.S. intentions, which include not taking sides on territorial disputes in Asia, opposing land reclamation activities undertaken not just by China but also by other countries in the South China Sea, and where appropriate, publicly rebuking Japan on its penchant for whitewashing Japanese atrocities committed in World War II against neighbors such as China.

The Obama administration has already adopted a number of these measures, as evidenced by the flight of an advanced U.S. military surveillance aircraft—conducted with a CNN reporter on board—near China’s artificial islands in the South China Sea late last month. No doubt the administration can still improve further on its China policy, but it would be inaccurate to label each of its actions or policies as facile.

The key now, as Christensen writes, is to maintain a “very strong U.S. military presence in East Asia” that is crucial for reducing regional instability and keeping the peace. The strength of such a U.S. presence would allow for opportunities of cooperation and confidence building in an environment where Beijing would not mistake Washington’s entreaties as weakness. That combination, not just endless calls for tougher action against China, would go a long way to dissuading Beijing from achieving its ambitions through coercion.

Ying Ma is the author of Chinese Girl in the Ghetto.