How to Solve the Ukraine Crisis 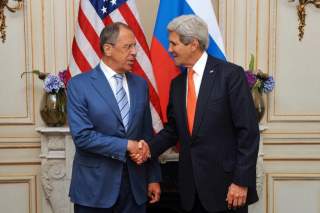 Amid heightened fighting in eastern Ukraine this week, with separatist rebels gaining control of several checkpoints along the Russian border as well as various military bases in Luhansk, few observers are forecasting a peaceful resolution to the conflict anytime soon. Yet even as President Obama and Putin trade warnings alongside D-Day anniversary commemorations, the terms of an eventual agreement are not difficult to imagine.

The parties to such an agreement—Ukraine, Russia, the United States, Germany and France—should begin by recognizing the brutal realities that confront Ukraine.

Most of the territory that is now Ukraine was part of Russia for most of the past millennium, and will remain so in the mind of Putin and his associates for the remainder of their lives.

Geographically, it shares a lengthy border with a brutal bear—and has no option to move. Ethnically, Russians constitute the largest minority in Ukraine. Economically, Russia is Ukraine’s biggest trading partner, supplying 60 percent of the gas and half of the raw materials Ukraine imports and buying more of its exports than any other country. For every initiative the EU or United States can take to help Ukraine, Russia has five ways to undermine it. In sum, if Ukraine is to have a chance to succeed as a modern nation, it will require a degree of acceptance and cooperation from Russia as well as its Western neighbors.

Given these realities, what conditions might help settle the ongoing conflict in eastern Ukraine, the inherent instability in Ukrainian politics and a faltering economy that stands at risk of default? Key terms can be summarized under six headings.

First, Ukraine should reaffirm the commitment made in its original Declaration of Independence to its status as a “permanently neutral state, which does not participate in military blocs.” As such, it would be independent, militarily neutral and thus, not a member of NATO or a Russian-led counterpart.

Second, Ukraine would be free to enter into economic agreements of its choice with both the EU and Russia—but on a nondiscriminatory basis. Specifically, these agreements would prohibit arbitrage—that is, buying gas or other raw materials from Russia at below-market prices and reexporting them at higher prices to the EU.

Third, Ukraine’s central government would decentralize power to the states, allowing them to elect governors (as normal countries do) and make political choices close to the people from whom political power is derived.

Fourth, Ukraine would provide legal guarantees to meet the highest European standards for minority rights embodied in EU charters and conventions, including the right of individual regions to use Russian as a second language in schools and official business.

Fifth, with the cooperation of each of the states convened, and with the OSCE taking the operational lead, all “self-defense” and unauthorized armed groups in Ukraine, east and west, would be disbanded and disarmed, and those who had participated in illegal acts would be granted amnesty (with exceptions for criminal prosecution of individuals with blood on their hands).

Sixth, as suggested by Ukrainian President-elect Poroshenko, Western countries would join in a new agreement that recognizes Ukraine’s security concerns and pledges to respect Ukraine’s independence and territorial integrity.

Obviously, the devils are in the details under each of these headings. Every item requires compromises, sometimes ugly compromises of aspirations and claims to which commitments have been made. Neither the newly elected president of Ukraine, nor his Western colleagues can accept Russia's annexation of Crimea—even though the fact cannot be reversed in the foreseeable future. Thus, any agreement that includes Russia will be vulnerable to criticism that it is letting the thief keep ill-gotten gains. Domestic political realities for Obama, German Chancellor Merkel, French President Hollande and Poroshenko preclude any deal that appears to impose conditions on Ukraine like military neutrality (shades of Yalta!). Putin will be sensitive about anything that could appear to betray ethnic Russians in eastern Ukraine who responded to his rhetorical justification of annexation of Crimea by seizing power in Donetsk and Luhansk.

Each of these leaders understands that politics is the art of the possible. Of course, Ukraine matters; Crimea matters. But for each of them, most especially Poroshenko, what matters more is what President Obama has famously called "nation building at home." Thus, despite this week’s escalation of violence, it is more likely than not the case that an agreement to settle the Ukrainian conflict will take shape in the weeks ahead.

Graham Allison is director of the Belfer Center for Science and International Affairs at Harvard University’s John F. Kennedy School of Government.