How to Stop North Korea: Use the 'Python' Strategy 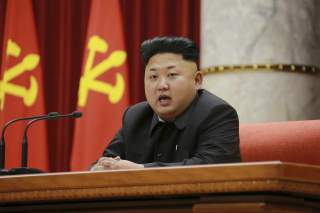 On November 28, North Korea once again defied the international community. In violation of UN resolutions, it launched an ICBM—its third successful ICBM test of the year. This missile flew far higher than Pyongyang’s previous missiles. Had it flown on a normal trajectory, it would have a range of 13,000 kilometers, sufficient to threaten the entire continental United States.

North Korea declared the test was the first of the Hwasong-15, "an intercontinental ballistic missile tipped with super-large heavy warhead which is capable of striking the whole mainland of the U.S." It is currently uncertain whether the test demonstrated a reentry vehicle capability, which is an important step prior to deployment of the ICBM.

In July, two tests of the Hwasong-14 ICBM demonstrated estimated ranges of 10,000–11,000 kilometers, sufficient to target Los Angeles, Denver, Chicago, and potentially New York City and Washington DC. In September, North Korea conducted a nuclear test of over 150 kilotons, most likely a hydrogen weapon. For comparison, the 1945 atomic bomb explosions over Hiroshima and Nagasaki were only fifteen kilotons. Pyongyang has also threatened to conduct an atmospheric test of "an unprecedented scale hydrogen bomb" over the Pacific Ocean.

This week's event was the first missile launch in seventy-five days. Supporters of President Donald Trump asserted that Pyongyang had been deterred from further launches by the president's resolute threats. Alternatively, advocates for resuming diplomatic engagement with North Korea asserted the launch hiatus was a "signal" that Pyongyang sought diplomatic engagement and wished to resume negotiations with the United States. Secretary of State Rex Tillerson and Deputy Assistant Secretary of State Joseph Yun had suggested that a launch hiatus of sixty days could provide an opening for bilateral discussions with the regime.

North Korea's launch undercut both theories. The most likely explanation for the gap in testing is more anodyne: North Korea typically launches fewer missiles in the fourth quarter of each year—approximately one-fifth of what it flies in earlier quarters. If past is prologue, we can expect an uptick in launches early in 2018, including a long-range ICBM test over Japan and far into the Pacific Ocean.

Advocates for diplomatic re-engagement depict Pyongyang's missile launch as a response to the Trump administration’s recent redesignation of North Korea as a state sponsor of terror. Offsetting blame for North Korea's transgressions onto the United States enables them to justify a return to negotiations. These advocates interpret Pyongyang's claim that it has "finally realized the great historic cause of completing the state nuclear force” as a prelude to forthcoming regime flexibility on talks.

But during Track 1.5 meetings in Europe earlier this year, North Korean officials showed no signals of flexibility or willingness to negotiate. Instead, North Korean interlocutors presented a stark choice: “First accept us as a nuclear state, then we are prepared to talk about a peace treaty or fight. We are ready for either.”

In Washington, there is little inclination in either the executive or the legislative branch for a return to negotiations, given twenty-five years of failure to achieve their stated goal of North Korean denuclearization. North Korea has consistently declared it has no intention of abandoning its nuclear arsenal, even revising its constitution to permanently enshrine itself as a nuclear nation. North Korea has also repeatedly rejected attempts by Washington and Seoul to engage diplomatically.

The Trump administration responded to the missile launch in considerably more muted tones than its earlier threats of preventive military attacks to keep the regime from completing development of an ICBM. Secretary Tillerson proclaimed, "Diplomatic options remain viable and open, for now. The United States remains committed to finding a peaceful path to denuclearization and to ending belligerent actions by North Korea."

Rather than threatening military options, Trump instead vowed to impose “additional major sanctions” onto the regime. Secretary Tillerson emphasized “We have a long list of additional, potential sanctions, some of which involve… financial institutions. And the Treasury Department will be announcing those when they’re ready to roll out.”

Tillerson may have telegraphed a new tactic by declaring that "the international community must take additional measures to enhance maritime security, including the right to interdict maritime traffic transporting goods to and from the DPRK." Although UN resolutions require that all cargo going in and out of North Korea be inspected, China has resisted enabling the means to do so on the high seas.

The Trump administration should refrain from its previous bellicose threats of preventive military strikes. U.S. attacks should be reserved for convincing signs of imminent North Korean attack. Preventive attacks in circumstances that do not clearly pose a security threat could trigger a war with a nuclear-armed state that also has a large conventional military force poised along the border with South Korea. Such talk has unnerved America's allies. South Korean president Moon Jae-in vowed to "prevent a situation where the U.S. considers a preemptive attack against North Korea."

Washington should also reject calls for a premature return to negotiations. There is little utility to such negotiations as long as Pyongyang rejects their core premise, which is abandonment of its nuclear weapons and programs. Advocating yet another attempt at negotiating a nuclear settlement with North Korea flies in the face of Pyongyang’s previous broken pledges never to develop nuclear weapons and subsequent promises to abandon those weapons.

The best way to engage in negotiations is after a comprehensive and rigorous international pressure strategy, including enforcement of U.S. laws. If the United States is serious about going after North Korea’s nuclear and missile programs and those who assist it, Washington will have to mount a more sustained and committed sanctions campaign.

Trump has described his North Korea policy as "maximum pressure and engagement," yet has continued to pull U.S. punches on sanctions. Most notable is his reluctance to impose secondary sanctions on Chinese entities that are violating U.S. laws. Rep. Ed Royce (R-Cal), chairman of the House Foreign Affairs Committee, gave the White House a list of twelve Chinese banks that should be targeted for sanctions. No action has been yet been taken.

In September, the Trump administration released a new executive order which provided authority to freeze assets of any entity trading in goods, services or technology with Pyongyang. Treasury Secretary Steven Mnuchin declared that, "foreign financial institutions are now on notice that going forward they can choose to do business with the United States or North Korea, but not both." But no sanctions have been issued under the new authority.

Sanctions and targeted financial measures require time and the political will to maintain them in order to work. It is a policy of a slow python constriction rather than a rapid cobra strike. Sanctions, in conjunction with other instruments of national power, have a better chance than any tool being used in isolation.