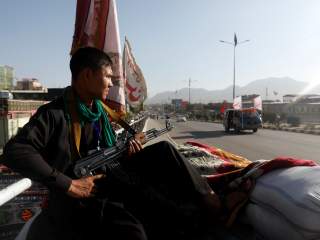 The seemingly endless war in Afghanistan—which is heading toward its eighteenth year since the overthrow of the Taliban regime—has led to a renewed push for an American military withdrawal. The Trump administration is considering withdrawing some or all U.S. forces from Afghanistan. Several American politicians support a drawdown. “I think we should come home,” declared U.S. Senator Rand Paul. “I don’t think we have enough money to be paying to build and rebuild and build and rebuild Afghanistan … Let’s rebuild America.”

Others have argued that Vietnam turned out fine in the end following the U.S. withdrawal in 1975. “While the Vietnam War was a near-term strategic defeat, in retrospect, it may yet prove to have been a geo-strategic win,” another article in Small Wars Journal concluded. “The same may prove true for Afghanistan after a U.S. withdrawal. Like a bad business investment, there are times when you must accept one’s losses and move on.”

The Trump administration is currently focused on both trying to reach a peace deal with the Taliban and continuing military operations. U.S. officials have concluded that the Taliban is unlikely to be defeated on the battlefield, and there is limited U.S. domestic support for the war. But it is unclear whether negotiations will succeed in ending the war, even if an initial deal is reached with the Taliban. After all, only a quarter of insurgencies end with a settlement, while nearly three-quarters end on the battlefield. Since World War II, insurgent groups have successfully overthrown a government or gained independence in 35 percent of insurgencies, and governments defeated insurgents on the battlefield in 36 percent of insurgencies. In addition, there are significant challenges with reaching a deal that sticks in Afghanistan: not only does it require negotiating an agreement acceptable to the Afghan government, the Taliban, Pakistan and the United States—a tall order—but all sides have to sell it to their constituencies.

At the international level, successful negotiations will require agreement on a complex and sensitive set of issues like convincing the Taliban to cut ties with Al Qaeda and other terrorists, enforcing a cease-fire, removing all foreign forces and monitoring Taliban compliance.

Negotiations at the domestic level are even more difficult. On the Afghan side, President Ashraf Ghani would likely face intense opposition from some Uzbek, Tajik, Hazara and even Pashtun leaders who do not trust the Taliban and have searing historical memories of tit-for-tat brutality in cities like Mazar-i-Sharif, Kunduz and Taloqan. Depending on the specifics of a deal, the Taliban might also face strong objections from some of its more hardline constituencies, such as the Haqqani Network. Settlement discussions frequently cause hardline factions to break away and continue to fight, like the Real Irish Republican Army did in Northern Ireland in the late 1990s.

For all of these reasons, the odds are stacked against a successful peace deal. According to many proponents of withdrawal, the United States has no major strategic interests left in Afghanistan, and, regardless, a military presence would not achieve U.S. objectives at an acceptable cost. Al Qaeda and the Islamic State have been severely weakened because of a relentless counterterrorism campaign, according to this view, and U.S. forces are no longer needed in Afghanistan to combat a diminished threat. Others in the region should pick up the burden in blood and treasure. Policymakers and the public need to carefully think through the implications of such a move, since a U.S. military withdrawal from Afghanistan would carry serious risks.

If the United States were to withdraw all of its military forces from Afghanistan, what might occur? Answering this question first requires understanding regional balance of power politics, since both the Afghan government and the Taliban receive aid from foreign powers.

To begin with, it is difficult to overstate the psychological impact that a U.S. military withdrawal would have in Kabul and other capitals. An American departure would almost certainly trigger a withdrawal of European and other allied forces from the country. Today, there are approximately 14,000 U.S. military personnel in Afghanistan and nearly 8,000 military personnel from NATO and other partner countries. Outside of the United States, the largest troop-contributing countries include Germany (approximately 1,300 personnel) and Italy (approximately 900). In addition, European countries—including the European Union—provide significant financial assistance to the Afghan government through two main trust funds: the Afghanistan Reconstruction Trust Fund and the Law and Order Trust Fund for Afghanistan. While continuing financial assistance might prevent an immediate collapse of the Afghan government, the withdrawal of U.S. and European forces would shift the balance of power in favor of a Taliban that is already receiving significant outside aid.

The Pakistan government—especially the Directorate for Inter-Services Intelligence, or ISI—continues to offer several types of assistance. It provides money, intelligence, and lethal and non-lethal material to the Taliban and other groups. Pakistan also provides housing and logistics to some Taliban leaders, including allowing the group to establish a sanctuary on its soil with notable freedom to operate. The Taliban’s leadership, or Rahbari Shura, is situated in Pakistan. Examples include Haibatullah Akhunzada, the Taliban’s leader (or emir); his deputies, Sirajuddin Haqqani and Mohammad Yaqub; and a range of senior leaders like Abdul Qayyum Zakir, Ahmadullah Nanai, Abdul Latif Mansur and Noor Mohammad Saqib. The Taliban’s main regional shuras are also located in Pakistan in such areas as Quetta, North Waziristan and Peshawar.

Pakistan has long been involved in Afghanistan to protect its national security interests. Since Pakistan’s independence in 1947, Islamabad and New Delhi have been involved in a balance of power struggle that has led to several wars. Both lay claim to Jammu and Kashmir, and both have nuclear weapons. India remains a major ally of Afghanistan and provides substantial assistance to the government in Kabul. Part of Pakistan’s concern—as one senior ISI official explained to me—is a “double squeeze” by New Delhi. Pakistan leaders assess that their country is surrounded by hostile neighbors: India to its south and east, and Afghanistan to its north and west. In addition to Pakistan, other regional powers—such as Iran and Russia—have provided aid to the Taliban.

A U.S. military withdrawal from Afghanistan would shift the balance of power heavily in favor of the Taliban and its outside supporters, including Pakistan.

With this change in the balance of power, one of the Taliban’s most important initial steps would be to ramp up its propaganda campaign with a simple, but powerful message: a Taliban victory is inevitable without U.S. military forces. The goal would be to encourage defections from the Afghan army and police forces, co-opt militia commanders across the country, threaten Afghan government collaborators and woo locals to either support the Taliban, stand aside or face likely death. Popular mobilization is essential to any successful insurgency, as the Chinese leader and insurgent Mao Zedong remarked: “Without question, the fountainhead of guerrilla warfare is in the masses of the people.” The Taliban’s propaganda campaign—which is designed to mobilize the Afghan population—already labels the Afghan government as corrupt, weak and religiously bankrupt. It also lauds the Taliban as more effective in establishing justice and enforcing Islamic law—what Taliban propaganda has referred to as “legitimate jihadi resistance.”

The Taliban has an array of media organizations to conduct propaganda—such as Al-Emarah Studio, Al-Hijrat Studio and Neda al-Jihad Studio—which it would aggressively use in conjunction with military operations. It also has a website, Voice of Jihad, and publications like Al-Samoud magazine (in Arabic), Shahamat (in Pashto) and Shariat (in Urdu). The Taliban would complement these forums with information distributed by local radio programs and word of mouth from allied religious, tribal and other influential figures.

The Taliban’s strategy in taking Kabul in 1996 may provide some clues to its future activity. The Taliban approached tribal leaders and militia commanders and attempted to co-opt them. Taliban leaders claimed to provide moral and religious clarity, since they advocated the return to a purer form of Islam and tried to capitalize on their own momentum by convincing locals that resistance was futile. They used their knowledge of tribal and sub-tribal dynamics to appeal to Pashtuns and, in the cases when they didn’t succeed, often resorted to targeted assassinations to coerce the rest. It was a strategy accomplished at a very personal level, as Taliban leaders who spoke local dialects traveled to villages and district centers. In addition, the Taliban didn’t need to deploy forces throughout the countryside and didn’t have enough forces regardless.

Based on the Taliban’s past and current activity, the group’s broad military strategy would likely include several steps: expanding its control of rural territory in districts near strategically-important cities, conducting assassinations and bombings in urban areas, and eventually attempting to overrun and hold urban areas—including Kabul. Once a few cities fell, the Taliban would almost certainly attempt to create a “domino effect” that encouraged Afghan government defections and facilitated the capture of other cities with minimal fighting. The Taliban have already conducted offensive operations against provincial capitals, though they have failed to hold cities because of effective responses by U.S. special operations forces, U.S. air power and specialized local forces like the Afghan National Army Commandos. In August 2018, for instance, the Taliban conducted a major assault on Ghazni city, temporarily overrunning it. In May 2018, the Taliban briefly held much of the city of Farah before being expelled by U.S. and Afghan forces. In September 2015, Taliban forces besieged the northern city of Kunduz, but were similarly pushed back by U.S. and Afghan forces. The Taliban have also overrun checkpoints, outposts, bases and district centers in all regions of the country.