How the GOP Became the Party of Trump 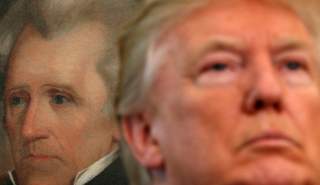 Donald Trump’s grip on the Republican Party is so secure that his enemies draw a warm bath and open their veins rather than face the violent death that awaits them in their primaries. That’s the real meaning of Jeff Flake’s act of political seppuku this week. His speech from the Senate floor about the need to defend democratic norms is not the beginning of some heroic Republican resistance, the opening salvo of a civil war—because Flake has no army. Bob Corker has no army. John McCain and Mitt Romney and George W. Bush have no armies. It can’t be a civil war when all the troops are on one side: Trump’s.

If there was going to be a Republican resistance, where would it start? Geography is still king in American politics, unfashionable though that may sound. Trump is president because he understood this: he campaigned in places where he wasn’t supposed to have a chance because he believed, rightly, that his message could win the Rust Belt. Where does the NeverTrump message win? Not in the South, unless Roy Moore is what you want. Not in the West, as Jeff Flake and Dean Heller illustrate. Not even in the old bastions of the Rockefeller Republicans and “Eastern Establishment.” Trump is popular with white ethnics and the Giuliani or Christie constituencies. New England has had its own Trump, Maine governor Paul LePage, since 2011. Susan Collins is nobody’s idea of the future of the Republican Party.

How about suburban America? How about places with a lot of highly educated votes? Try Virginia: Trump won its presidential primary last year, and a long-shot Trumpist candidate almost won the gubernatorial nomination this year. The actual gubernatorial nominee, Ed Gillespie, has made Trump’s signature issue, immigration, a flashpoint of the campaign by tying his Democratic opponent to the MS-13 gang. What was once the party of Sen. John Warner or Attorney General Ken Cuccinelli—a party divided between the establishment and Christian right wing—is now becoming another Trump state party.

Utah and the op-ed page of the Washington Post together do not make a force with which to retake the Republican Party, or even to contest its direction. It’s not that there’s no place for an anti-Trump GOP to go; there’s no place for it even to start. It certainly won’t start in Congress, which is the most unpopular branch of the federal government: Trump’s worst approval ratings are easily three times as high as the typical approval ratings for Congress, which sometimes struggle to reach double digits. As I write, the RealClearPolitics polling aggregate indicates that less than 13 percent of the public approves of Congress’s performance. This is why Trump has no fear of getting into a fight with a legislature controlled by his own party: he won in November 2016 not by being overwhelmingly popular, but by being more popular relative to Hillary Clinton in most parts of the country. Trump is more popular than Congress, by a long way, and he can quite plausibly say that a Congress led by Mitch McConnell and Paul Ryan isn’t really controlled by his party—it’s controlled by what the Republican Party used to be. And everybody hates that: Democrats, hard left and populist right alike. It’s the friendless persuasion.

The magnitude of the GOP’s transformation, from the party of Mitt Romney just five years ago to the party of Trump today, is astonishing. How did one man achieve so much with just one election?

The answer, of course, is that he didn’t—not alone. Donald Trump’s critics focus on Donald Trump the man so much because they cannot afford to admit that they themselves are more than half the reason that Trump is president today. Trump was a celebrity, and he’s an instinctively gifted campaigner. He spoke political truths, however crudely, that the public longed to hear. But that’s the point: they longed to hear what Trump had to say about America’s raw deals and the wars we don’t win any more because no one in the political establishment of either party dared to voice such thoughts. Execrable leadership by respectable Republicans and Democrats created the conditions that led to Trump. A challenge to Trump would have to come from a sector that is as untainted as he is by the failures of the last decade. That’s precisely what the old Republican Party—the party of the Bushes and John McCain—is not.

Whether Trump can deliver on his promises is partly beside the point: it may be enough simply that he is not promising the old policies that voters in most states have grown sick of. In the abstract, as well as when he’s concretely faced with an opponent like Hillary Clinton or the Republican Congress, all Trump needs to win is a foe who is more widely unpopular than he is. Trump is the effect, more than the cause, of the crisis in American government.

And if Trump should fall, the old order and its “norms” will not simply re-emerge, certainly not in the GOP. During the Bill Clinton years, the GOP seemed to perfect a symbiosis with a conservative media machine—talk radio and the new Fox News—that could rile up the base while channeling its energy to the benefit of conventional Republican politicians. That continued in the George W. Bush years and for some time thereafter. But the new right-wing media turned out to be a doomsday machine without an “off” switch for the GOP. Once the machine reached full power, it could no longer be harnessed: it had its own logic and momentum, and the politicians who were on top of the tank suddenly found themselves underneath its tracks.

This puts Trump’s Republican enemies in an awkward place. They can’t take back the GOP; they can’t even begin to do so. But they won’t be welcome in a Democratic Party of identity politics and Bernienomics. There is no place for them to start a third party, either. The price they finally pay for failing to recognize their own faults is oblivion.