How the GOP Establishment Backed Jeb...and Could End Up with Trump 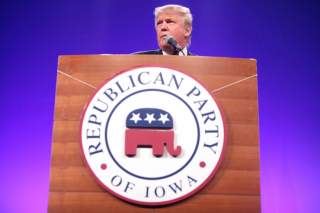 Last month, a warning bell was rung in the pages of National Review. An article appeared there by Eliana Johnson reporting that Republican insiders were now taking seriously the notion that Donald Trump could win their party’s presidential nomination. A piece at NBC News the next day made clear the GOP was no longer complacent about the tirade tycoon and was plotting to take him down.

They have reason to be worried. The Republican establishment’s pretext for dismissing Trump has always been that he’s a bearded lady dancing to calliope music—an indulgent diversion, in other words, but one that voters will inevitably abandon once they spot the big-letter attractions. That hasn’t happened. Trump has now sat at or near the top of the polls for almost 110 days. There are only 87 days left until the Iowa caucuses. Nothing—not even a comparatively feeble debate performance last week—has shaken a quarter of the Republican electorate out of its Trump stupor.

To be fair, there probably isn’t a political observer alive who foresaw the Summer of Trump, let alone its autumnal persistence. But the GOP still deserves plenty of blame for Trump, mostly because of who it selected as its establishment candidate. The decision by Republican elites to wheedle Jeb Bush into running for president, sink hundreds of millions of dollars (literally) into his campaign, and continue to back him long after it became clear he wasn’t viable is one of the most baffling calls I’ve seen a major political party make.

Start with the issue of immigration. It’s Trump’s cause célèbre and a major source of heartburn among conservative activists. The Republican base first rebelled against George W. Bush’s attempt at immigration reform back in 2006, then erupted in anger when the House gave it another try during Obama’s second term, then fired a devastating warning shot by replacing House Majority Leader Eric Cantor with the firmly anti-amnesty Dave Brat.

We can debate the merits of conservative rigidity on immigration, but no political party can afford to ignore its base on such a hot-button issue. Yet that’s exactly what the Republican establishment did. It chattered on about how Jeb Bush supports a guest worker program while the Chamber of Commerce began making risible threats against anti-immigration reform Republicans in the House. Together, the two groups appeared as Mugsy and Rocky, the hapless gangsters from Looney Tunes. Conservatives responded by championing a cartoon character of their own, but one who at least wasn’t tone-deaf to their immigration concerns.

And it wasn’t just immigration. After they were swept out of government back in 2008, conservatives took a hard, sobering look both in the mirror and at the nation around them. They emerged more fiscally conservative than before, with a new determination to trim the budget, an allergy to government debt, and a bit more skepticism towards quixotic overseas adventures like Iraq. They also became more populist to reflect their newfound skepticism of big institutions and outsider status in the age of Obama. The resulting change was best embodied by the tea party, and was as much a revolt against Barack Obama’s liberalism as it was against George W. Bush’s compassionate conservatism.

The GOP establishment seems to have missed all this. At some point last year, an allegedly sentient Republican stood up at a country club somewhere and said, “You know what this party really needs? Another Bush.” And hundreds of other Republican elites nodded and hear-heared in unison. It was a choice that ran so counter to the conservative zeitgeist that it helped inspire an equal and opposite unfathomable decision by the base: nominate Donald Trump to make their voices heard. This has resulted in a polarity of the absurd that’s on display at every debate, with the impossibly belligerent Donald Trump standing next to the impossibly genteel Jeb Bush.

Only Trump is pulling away with the nomination. Bush has underperformed and is currently floundering alongside John Kasich in the latest Fox News poll. This is what happens when you tune out your base and dragoon a candidate into an election where he doesn’t fit.

Why the dragooning? The donor class has a personal relationship with Bush as well as an ideological compatibility—many Republican elites have yet to give up on hawkish Dubya conservatism. And there’s the old GOP obsession with waiting one’s turn. We writers often view politics through the prisms of policy and ideology, but in a political party, these are often trumped by institutional factors like seniority and ingratiation. One of the most illustrative quotes from this campaign season comes from an anonymous Florida power broker in an email to the Tampa Bay Times: “Most FL Republican heavyweights are supporting Jeb and see Marco running against him as an act of disloyalty towards his mentor.” Translation: Quit trying to cut the line, Rubio!

The problem is twofold: Rubio is hell-bent on cutting the line anyways, and many conservatives want a candidate who not only cuts the line but sucker punches everyone in it on his way to the front. Hence Donald Trump. The GOP probably couldn’t have stopped Trump’s ascendance, but it might have mitigated the damage by throwing its money at Scott Walker or Rubio. Both have apostasies, but both also have credibility with the base. Good cultivation of a Walker or Rubio campaign might have mended some of the party’s divides and given Trump stiffer competition.

Instead, the moneymen went with Jeb Bush, a chasm widened in the GOP, and Donald Trump ran wild. It’s a decision they surely must regret by now.