How the Middle East Became Russia's Game, Not America's 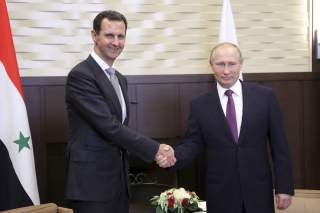 While the U.S. media continues its laser-like focus on the “Twitter battle” between the president of the United States and the father of a college basketball player who was released from detention in China after the personal intercession of Donald Trump with Chinese president Xi Jinping, the geopolitical destiny of the Middle East is being reshaped at Vladimir Putin’s dacha in Sochi.

First, Syrian leader Bashar al-Assad made a surprise visit at the beginning of the week, to thank Putin for Russian assistance and to pledge his cooperation to Russian-led efforts to produce a settlement—secure in the knowledge that his ouster from power is not one of the preconditions. Then, Putin phoned King Salman of Saudi Arabia, to brief him on the discussions—and to hear about Saudi efforts to support personnel changes in the roster of the leadership of the Syrian opposition, in an effort to remove or sideline the most vociferous opponents of any accommodation with Assad. Finally, the Iranian and Turkish presidents arrived in Sochi for a trilateral Russia-Iran-Turkey conclave to discuss the Syrian transition process. Putin did call Trump to provide the White House with a readout of events, but the tone was unmistakable: Moscow was briefing Washington as a courtesy, but not looking for American guidance or permission—or even participation.

Reaction in the United States generally follows one of three predictable patterns: the “let them handle the problem if they want it” approach, which builds on the “America First” mindset; the “Russia is going to fail” prediction, which argues that the United States need not worry, because Moscow can’t get the job done; or the moralizing denunciations of any dealing with the butcher of Damascus. What all three of these approaches share in common is a recognition that the United States is not willing to invest serious skin in the Syrian endgame other than tinkering at the margins. What is more critical, however, is that the actors upon whom so much of U.S. policy in the past rested are changing their approach—and allegiance.

The recent prevailing pattern of U.S. interventions around the world, which Ray Takeyh and I described in these pages five years ago, is for the United States to use its formidable technological, logistical and airpower capabilities to back up proxies on the ground. In Syria, the United States turned to its two main allies—Turkey and Saudi Arabia—to support and sustain the anti-Assad opposition, and relied on the Kurdish populations of the region to provide the core of the fighters to combat the Islamic State. All three, however, are no longer as trusting of Washington’s assurances—and are looking to Moscow to provide alternatives and to use its good offices to make deals.

Russia’s efforts may yet fail—the naysayers in the United States are not wrong to point out the many challenges—but Russia still gains from having tried. More importantly, the Sochi summit is confirmation that a new alignment is shaping up in the region.

Recep Tayyip Erdoğan, Turkey’s president, now sees Putin face to face on a regular basis, far more than he interacts with his nominal allies in Europe and the United States. Erdoğan has dramatically shifted his position—he no longer sees it in Turkey’s interests to block the expansion or projection of Russian power into the eastern Mediterranean or the Middle East on behalf of Western allies that he no longer feels have Turkey’s interests at heart. Why not reach a more profitable accommodation with the Kremlin? Relying on any sort of innate Russian-Turkish hostility to keep Moscow’s ambitions in check overlooks those periods where Turkey and Russia have worked together for mutual interest.

And why should Turkey also take the brunt of costs for isolating and confronting Iran? Why not instead sit down with the Iranians to reach accommodations that meet both Turkish and Iranian interests, instead of bearing the costs of sustaining a more confrontation approach with Tehran? For Hassan Rouhani, the trilateral format, along with the emergence of the north-south transport corridor, are guarantees that Iran can never again be isolated politically and economically.

For Putin, this new understanding with two major regional powers that traditionally were Russia’s geopolitical rivals is an important test (and possible vindication) of his approach to world affairs—not the paeans to a twenty-first-century interconnected future but a return to classic nineteenth-century century sphere-of-influence politics. There have already been some successes in Syria in getting regional cease-fires to hold and deconfliction zones in place. If progress can be made on a Syria settlement—and one where the United States has been sidelined—why not use this trilateral format for other issues, starting with the Kurdish question and then the thorny frozen conflict of Nagorno-Karabakh between Armenia and Azerbaijan? Putin’s pitch to Erdogan, one he does not already need to make to Rouhani, is that the West, and specifically the United States, is not required for progress to be made.

What does Russia hope to gain from all of this? It is not simply the search for diplomatic kudos. Russia’s argument to Ankara and Tehran is that the Black and Caspian Sea regions do not need American presence or involvement. Flipping Turkey—which in the past committed to act as a barrier to the expansion of Russian influence on behalf of the Western alliance—into an effective neutral actor is a major geopolitical gain. Building on that, Moscow’s next steps are to try and redefine new rules of the game of the Middle East, with Russia as the indispensable referee. Yet, if Russia is to play this role, then efforts to try and isolate and pressure Russia must stop, including the current rounds of sanctions. The endgame for the Kremlin is not simply to win praise for its diplomacy, but to create stakeholders in the maintenance of Russia as one of the world’s great powers.

And if Russia can show that its model of transactional bargaining can produce results, expect for Putin to see if he can replicate that success in East Asia.

Image: Vladimir Putin shakes hands with Bashar al-Assad during a meeting in the Black Sea resort of Sochi, November 20, 2017. Sputnik/Mikhail Klimentyev/Kremlin via Reuters