How the Next Administration and Russia Can See Eye-to-Eye 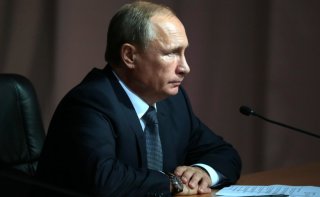 U.S.-Russia relations have drifted into a dangerous standoff, made worse by a mutual perception that the other side is unwilling to accept the status quo. While prospects for a significant improvement of relations are slim for the time being, the new U.S. administration has an opportunity to address Russian concerns about interference in domestic politics and pursue limited confidence-building measures to limit the potential for accidental escalation.

Russian efforts to weaken Euro-Atlantic institutions through a mix of threats, intimidation and subterfuge threaten European stability, as well as pillars of the liberal order established at the end of the Cold War. While Russia’s revisionist turn has complex origins, one frequently stated factor is the belief that the United States is intent on regime change in Moscow, as well as in countries around Russia’s borders. As President Putin noted following his first phone conversation with Donald Trump, Russia hopes for a dialogue on the basis of “equality, mutual respect, and noninterference in the other’s internal affairs.” These criteria are neither new nor incompatible with U.S. interests, and can provide a reasonable basis for engagement with the Kremlin.

Beyond providing assurances that it has no aspiration or ability to promote regime change and that it accepts that Russia has legitimate interests in Europe, Eurasia and the Middle East, specific areas worth exploring for the new administration include military transparency and confidence building, managing conflict in cyberspace, and the conflict in Syria, where fundamental U.S. and Russian interests are less at odds than they often appear.

That said, the United States must make clear that preservation of the Euro-Atlantic order remains a vital national interest, and avoid giving the impression that its established commitments to European allies and partners are open for discussion. In the course of its engagement with Moscow, the new U.S. administration should make clear through words and deeds that no change in the bilateral relationship can occur as long as Russia continues its own interference in the politics of Washington’s European allies and fails to implement its existing commitments under the Minsk agreement. In particular, the United States needs to send a consistent message that U.S. and European sanctions will remain unchanged until Russia fully implements Minsk. Simultaneously, the United States should reassure its NATO allies and partners that it will fully honor its obligations, including following through on all the decisions taken at NATO’s Warsaw summit and continuing efforts to strengthen deterrence in Europe.

Jeffrey Mankoff is Deputy Director and Senior Fellow of the Russia and Eurasia Program at CSIS.