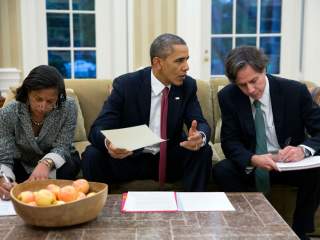 In the last year, the Obama administration began a little-noticed process that should be embraced by the next president: the downsizing of the National Security Council (NSC). On the White House blog, the National Security Council Chief of Staff Suzy George wrote: “[t]o ensure the NSC staff is a lean, nimble, and policy-oriented organization, we are reversing the trend of growth across successive Administrations…” However, while the paring back of the NSC is unlikely to feature in presidential debates or stump speeches, it is a consequential initiative that, if supported by the incoming administration, will help the next commander-in-chief more effectively deploy America’s diplomatic resources.

The United States faces a diverse array of threats in an extremely dynamic international environment. Unfortunately, the centralization of the U.S. foreign-policy decisionmaking process in the White House has become, at times, so great in recent years as to undercut America’s ability to meet global challenges, much less exploit opportunities to enhance long-term security and prosperity. While squabbles between the NSC and executive branch department heads have been detailed in memoirs and journalistic accounts, an important and less discussed component of the NSC’s rise is that it has left the vast diplomatic resources of the State Department underutilized. Reducing the size of the NSC is a good start. But to get better outcomes in the international arena, the next administration should delegate more responsibility for foreign-policy advising and execution to America’s professional diplomats.

The National Security Council was created in 1947 to advise the president on security matters and to coordinate foreign and defense policy across the executive branch departments and agencies. The NSC, which had just a few staffers in its early days, has grown enormously in recent years. I. M. Destler and Ivo Daalder, scholars of the U.S. foreign policy process, argue that the NSC staff has become more like an additional executive branch agency. They note that with “its own press, legislative, communication, and speechmaking offices, the NSC conducts ongoing relations with the media, Congress, the American public, and foreign governments.”

Destler and Daalder count three factors that explain the NSC’s increasingly central role in foreign policy. First, the growing technological capacity of the White House Situation Room to track overseas developments, monitor diplomatic cables and intelligence, and connect directly to foreign officials has made it a hub for foreign policy. Second, as America’s international concerns increasingly blur the jurisdictional lines that divide the executive branch agencies, the coordinating function of the NSC is more demanding than ever. For example, U.S. counterterrorism efforts have diplomatic, military, intelligence, finance and law enforcement components, requiring cooperation between State, Defense, the Intelligence Community, Justice, Treasury and others. Third, foreign policy has become more politicized in recent years, strengthening the incentive to involve trusted White House political advisers in the foreign policy-making process.

Beyond these factors, the importance of the NSC in the foreign policy process reflects the wishes of the president. Of course, it makes sense that the president would want trusted foreign policy experts close by. With more brainpower in the West Wing, it could be argued, the president is better equipped to make the difficult choices required of America’s commander-in-chief. Moreover, the national security advisor and the NSC staff serve at the pleasure of the president; they are his team, often having advised the president during the campaign or in other capacities. By contrast, the State Department largely comprises career diplomats with no preexisting ties to the president. Even the political appointees that the president nominates for leadership positions at the State Department end up with shared loyalties, to the president who appointed them and to the career diplomats that they manage and represent in the interagency process.

Though the causes of the bureaucratic trend toward greater foreign policy centralization may seem natural, its impact can be pernicious. Because the president has so much control over the NSC, he, as David Rothkopf notes in his book National Insecurity, can “[rewrite] org charts with his attention” by demonstrating that he values consultations with NSC staffers over officials at the State Department. The result, Rothkopf argues, is that in recent years the NSC has essentially duplicated executive agencies like the State Department in the White House. Yet the NSC staff cannot hope to ably perform all the functions of the State Department, much less do it while performing the coordination and strategic planning roles that it was created to carry out.

That is, even four hundred of the most talented and hardworking foreign policy professionals do not have the time or collective expertise to deal with all of the pressing international issues that deserve the United States’ attention, much less think about long-term challenges and opportunities. Last year, a former White House official told the Economist that 80 percent of Obama administration NSC meetings were devoted to the Middle East. Rather than allocating more resources to addressing Moscow’s revanchism, or refining and overseeing the implementation of the Asia pivot, the NSC appears to have become prisoner to the crisis du jour in the Middle East and North Africa. The NSC’s micromanagement of the day-to-day aspects of foreign policy has too often led to the prioritization of the urgent at the expense of the important.

Yet while the NSC staff may be stretched thin, there are vast and underutilized diplomatic resources in the State Department. As the NSC has taken the lead in foreign policy, the Foreign Service—America’s diplomatic corps—has been increasingly sidelined. Many Foreign Service Officers are robbed of the opportunity to bring their talent and, importantly, local expertise and relationships to bear on important challenges around the world.

Today driven diplomats, chosen through a rigorous and lengthy process for their intelligence and capacity to represent U.S. interests abroad, too often languish in assignments as overqualified escorts for delegations of American dignitaries, or as official cocktail party functionaries. This isn’t to say that all Foreign Service Officers are superstars; as in any organization, some employees do the minimum or become intellectually complacent. But many can make a positive impact if given the chance, and more will give 100 percent if provided the opportunity to do substantive work in diplomacy on a more regular basis.

To get better foreign policy outcomes in a complex and fast-paced world, President Obama’s successor should empower the State Department to carry out its mission of shaping and sustaining a “peaceful, prosperous, just, and democratic world.” The next administration should place its faith in American ambassadors and the embassies they lead, making clear to foreign leaders that Washington’s representatives abroad have the ear of the administration. Armed with the support of the White House, America’s diplomats can leverage their local knowledge and proximity to decisionmakers in foreign capitals to improve the management of Washington’s international relationships, negotiate agreements and promote liberal values. As former secretary of state George Shultz once said, diplomacy is like gardening: “If you want to see things flourish, you have to tend to it.” Nobody is better placed to tend to the garden of America’s international relationships than its ambassadors and Foreign Service Officers.

With American diplomats shouldering a greater share of the burden of executing U.S. foreign policy and advising senior officials, the NSC staff will be left with more time to think strategically, provide the president with a range of views on important questions and ensure unity of effort across the executive branch on America’s key foreign policy initiatives. For urgent but less important issues, the State Department and its diplomats should be empowered to act as conveners and coordinators, interacting with foreign counterparts to better understand their concerns and ensuring that Defense, Treasury, the Intelligence Community and others are working toward political ends that benefit American security and prosperity.

Scaling back the size of the NSC is a step in the right direction but the next administration should commit to decentralizing the foreign policy process. Further limiting the scope of the NSC staff’s mission will require presidential leadership—leadership in understanding one’s own limitations. Presidents may be reluctant to delegate more responsibility for foreign policy to State, but in the end will be rewarded with an interagency process better suited to focus on long-term planning and a greater ability to shape the world, rather than react to it.

Michael Goldfien is a Campaigns Fellow at Young Professionals in Foreign Policy, and has an MA in International Policy Studies from Stanford University. His research interests are in international relations, diplomacy and the U.S. foreign policy-making process.