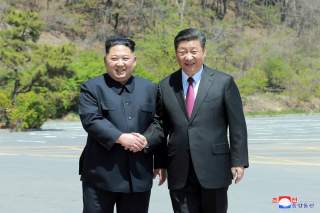 The highly anticipated summit in Singapore on June 12 fell woefully short on substance and undermined American national security. While an agreement to complete, verifiable, and irreversible denuclearization (CVID) between American and North Korean officials was nothing but a pipe dream, there was hope that President Donald Trump would be able to extract significant commitments from Kim Jong-un in return for simply agreeing to meet him. Instead, North Korea walked away with major unilateral concessions, including the freeze on joint U.S.-South Korean military exercises by the United States—which played right into the hands of the Chinese-promoted “freeze for freeze” strategy and cast doubt over American security guarantees to our allies across the region.

Exactly a week after the Singapore summit, Kim Jong-un made his third visit to China to meet with President Xi Jinping, highlighting an increasing trend of formal ties between the two countries. Official Chinese Foreign Ministry remarks praised Kim for his progress toward denuclearization and emphasized Chinese support for North Korean economic development. The United States cannot stand idly by as China establishes normal relations with North Korea or modernizes its economy before actual, concrete steps are taken toward denuclearization and peace on the peninsula.

The United States and North Korea have been the focus of coverage, but China, despite sitting on the sidelines, has been, and will continue to be, the real winner. The summit not only relieved significant pressure on North Korea but also scaled back the American military threat in China’s backyard. Crucially, the longer the North Korea saga lingers and the more diplomatic attention is fixed on their nuclear weapons program, the more China avoids harsher scrutiny from the international community. The international community must avoid complacency with what minimal objectives have been accomplished and must recognize that, until it has achieved its end goals on the Korean Peninsula, China will quietly bide time, build up its military and economic capacity, and eventually challenge the United States. Make no mistake: the danger that China poses to American economic and security interests around the world will not dissipate without a concerted effort from the United States free of distractions.

The threat that North Korea poses to the world is also still as real as it was before the summit, yet it is troubling that many laud the summit as a monumental success. Indeed, statements from the Chinese Foreign Ministry immediately after the meeting in Singapore suggest that China will advocate for United Nations sanctions levied on North Korea, which contributed to Kim Jong-un coming to the negotiating table in the first place, to be relaxed as a result of their supposed compliance. In fact, the Chinese had already begun to soften the restrictions prior to the summit, an acknowledgement made by President Trump. However, it is, important to note that to this point North Korea has yet to comply—the agreement that Kim signed does not constitute a reasonable commitment toward dismantling their nuclear weapons program.

If China, North Korea’s most significant economic trading partner, continues to loosen the sanctions imposed by the international community, the United States will have a difficult time convincing North Korea to even engage in good faith negotiations toward CVID. Furthermore, if China and North Korea maintain the current trajectory of diplomatic normalization and economic development, then it will be improbable that sanctions could even be reimposed. Recent threats by President Trump on trade that aggravate and harm U.S.-Chinese relations also serve to diminish the likelihood that China will continue to cooperate with the international-sanctions regime.

Similarly, President Trump’s Twitter remarks after returning from the summit are too glowing a reflection of its results. While the summit has proved useful in restarting long-absent channels of communication that have temporarily de-escalated tensions, the bulk of the work still lies ahead. Secretary of State Mike Pompeo and his North Korean counterparts must now try to hammer out technical language on an agreement that puts North Korea on a stable path toward real denuclearization. To champion the summit as rendering North Korea “no longer” a problem is to be content with what has been accomplished, and further jeopardizes American leverage and the ability to maintain sustained international pressure.

North Korea also has a long history of using the charm offensive to buy its nuclear weapons program extra time, a suspicion that many voiced before the summit. The United States has already afforded North Korea international legitimacy as a nuclear power by meeting as equals on the international stage, and has increased Kim’s sense of security by freezing military exercises with South Korea. Kim’s most recent visit to China—a week after his meeting in Singapore with the United States—similarly portrays North Korea as a state engaging in official diplomacy, further normalizing the DPRK and making it harder to rally support for persistent sanctions conditional only on real progress. Public declarations that play up the success of the summit will thus slow efforts to bring North Korea back to the table, give the appearance that American demands have been satisfied, and ultimately play right into Kim Jong-un’s hands by giving him more time to build his program. The United States must maintain diplomatic pressure for its negotiators to have credibility; without the requisite urgency, future talks are sure to fail.

The security risk North Korea poses is far from eliminated, and we need to see sustained diplomacy that results in concrete progress to reduce the threat. Capitulating or growing complacent would signal to aspiring world powers that a viable path to prestige is an illicit nuclear weapons program. That is why keeping up the pressure on North Korea until international inspectors can unequivocally confirm the process of dismantlement has started is so crucial: it dissuades nonnuclear states from considering the nuclear option as either a path to military supremacy or an avenue for economic development and international recognition.

It should be undeniable that preventing the proliferation of nuclear weapons is one of our top national-security objectives. At the same time, managing the rise of China and protecting our interests at home and abroad will be the greatest challenge of this century. The longer it takes for the United States to meet again with North Korea, the more China stands to gain in the region by stalling for time and inconspicuously catching up. As long as North Korea appears to be getting away with developing a nuclear-weapons program without consequences, then American allies like South Korea and Japan will further doubt our interest in their security, especially if we continue to suspend military exercises or follow through on speculated troop rollbacks. Meeting with Kim and making concessions in and of themselves may not jeopardize our bargaining position, but they must lead to concrete outcomes later in the process. Otherwise, China will gleefully watch from afar as fractures emerge between the United States and its most important partners in Asia.

The United States cannot rest on the laurels of the Singapore summit. If the United States speaks like it is mission accomplished, then the entire campaign that compelled North Korea to cooperate will unravel. If that happens, then Kim Jong-un will establish North Korea as a normal, nuclear-weapons state without proper retribution, and we will be unable to focus on the real challenge: China.

Dr. Lawrence J. Korb is a senior fellow at the Center for American Progress, and served as assistant secretary of defense (manpower, reserve affairs, installations, and logistics) from 1981 through 1985. Matthew Feng is an intern with the Center.

Image: North Korean leader Kim Jong Un shakes hands with China's President Xi Jinping, in Dalian, China in this undated photo released on May 9, 2018 by North Korea's Korean Central News Agency (KCNA). KCNA/via REUTERS ATTENTION EDITORS - THIS PICTURE WAS PROVIDED BY A THIRD PARTY. REUTERS IS UNABLE TO INDEPENDENTLY VERIFY THE AUTHENTICITY, CONTENT, LOCATION OR DATE OF THIS IMAGE. THIS PICTURE IS DISTRIBUTED EXACTLY AS RECEIVED BY REUTERS, AS A SERVICE TO CLIENTS. NO THIRD PARTY SALES. NOT FOR USE BY REUTERS THIRD PARTY DISTRIBUTORS. SOUTH KOREA OUT. NO COMMERCIAL OR EDITORIAL SALES IN SOUTH KOREA.