How the U.S. Military Is Trying to Mask Its Readiness Crisis 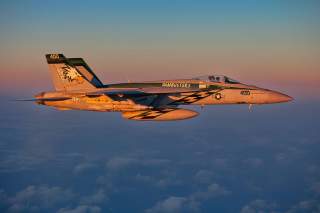 The Defense Department has quietly embarked on a multilayered approach to masking the difficulties its officials have been experiencing acquiring new military equipment while ensuring that old equipment is repaired and battle ready.

In early March, two directives on information sharing began circulating in the Pentagon. The first, dated March 1 and signed by Chief of Naval Operations Adm. John Richardson, urged officers not to discuss publicly information that could give away the Navy’s competitive edge, but instead to scrutinize and protect it. The second, dated March 2, issued via email by Pentagon spokesman Capt. Jeff Davis, detailed guidance from Defense Secretary James Mattis on publicly telegraphing shortfalls in weapons systems and other military equipment.

“While it can be tempting during budget season to publicly highlight readiness problems, we have to remember that our adversaries watch the news too,” Davis said. “Communicating that we are broken or not ready to fight invites miscalculation. Know that he is well aware of our readiness shortfalls, as are our elected leaders on both ends of Pennsylvania Avenue. They don’t need news stories to remind them. Help is on the way.”

Around that same time, the military began to label weapons-system information that was previously publicly available as classified, according to a government official.

“Some readiness information has always been classified and now we are classifying more of it,” the official said.

The government official said that “major weapons systems” had been shuffled under the classification umbrella, but did not provide details on specific systems. Instead, the official explained why moving them out of the public eye was necessary.

For years, the department has aired its grievances about its shortcomings to Congress in full view of cameras and reporters and the public. High-ranking representatives of the armed forces have lambasted aircraft shortages, highlighted funding shortfalls and directed attention to aging naval cruisers. Their readiness woes stem from a decade of participating in overseas conflicts and grappling with budget uncertainty amid force structure reductions.

Air Force, Army, Navy and U.S. Marines have repeatedly drawn attention to low readiness levels, which they have attributed to emerging and continued demands on their forces, a reduction in the size of those forces and an uptick in the tempo of deployments. In congressional hearing after congressional hearing, officials have attested to how the nation’s military might is deteriorating.

Now, the military will consciously try to move its weaknesses out of the public spectrum, according to the Davis email.

The press will still be allowed to make trips to the Defense Department’s bases, ships and aircraft because “embarks, embeds and visits remain an important part” of how the military highlights its missions and capabilities. “But we must always project strength when we do it,” he said. Also, some of the dialogue on Capitol Hill will shift from out of the public eye to behind closed doors.

“You will see similar guidance passed via Leg Affairs channels for how readiness is discussed in testimony,” Davis said of Mattis’ intentions. “As much as possible, he wants to move this out of the public domain and into private meetings or closed hearings.”

“I’m glad you got it and I hope you do quote from it because we stand by it,” he said.

Phillip Lohaus, an American Enterprise Institute research fellow and former Defense Department analyst, said he has already noticed a difference in tone. For example, when Air Force Chief of Staff Gen. David Goldfein talked about morale during the Wednesday Senate Armed Services Committee hearing on military space organization, policy and programs, he linked the morale of servicemembers to readiness.

In other words, pilots at Bagram Airfield and Kunsan Air Base are flying at a high rate and have a “very high level” of readiness, therefore their morale is very high.

“I was surprised to hear Gen. Goldfein describe readiness in such a laudatory term, because I don’t think that squares with the reality of where the Air Force is,” Lohaus said.

Thomas Spoehr, director of the Center for National Defense at the Heritage Foundation and a retired lieutenant general, said that he, too, has noticed that the Pentagon has become much tighter lipped on discussing any issues dealing with readiness shortcomings over the past several months.

“This is a result of guidance from the Chairman [of the] Joint Chiefs of Staff, General Dunford, who has asked the service chiefs to refrain from divulging information which may give our adversaries sensitive information,” Spoehr said in an email to the National Interest. “Reportedly, it also stems from a desire not to dishearten U.S. service members.”

Still, the need to protect information should be balanced against the need for the American public to be informed about the status of the armed forces, Spoehr said.

“While some deficiencies do need to be classified for the most part this is information that should be public to assess whether these systems are ready and reliable,” said Mandy Smithberger, director of military reform for the Project On Government Oversight. “Especially for newer systems that we’re still paying to develop the public has a right to know what it’s paying for, and the Department shouldn’t abuse the classification system to try to hide information that is embarrassing but not actually national security sensitive.”

For military officials, the classification expansion is meant to protect national security, not portray the government as secretive, the government official said. After all, specifics about military readiness should be kept out of the public eye because that is how adversaries keep track of America’s weaknesses and plot to take advantage of them, the official said. So far, no one has complained.

“It’s been several months now and there really hasn’t been that much of a pushback,” he said.