How Theresa May Gambled Away Her Power 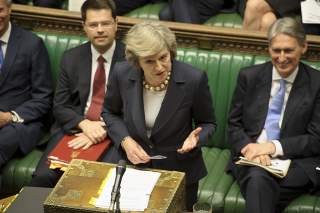 The former Labour prime minister Harold Wilson once remarked that “a week is a long time in politics.” Theresa May’s call for a General Election—seven weeks ago—feels like another age entirely. For the second time in two years, a Conservative prime minister has gambled on a nationwide vote, and suffered a self-inflicted wound.

In other circumstances, Britain’s electoral returns might constitute a win for the Conservatives. They have emerged with the largest share of the vote, and the largest number of parliamentary seats. Though just shy of a full majority, they should be able to form a working arrangement with the Democratic Unionists, Northern Ireland’s pro-Union and pro-Brexit party.

Yet context matters. The Tories began with expectations of a one-hundred-strong House of Commons majority, given their twenty point lead in the polls. Instead, they have bested the Labour party by just 3 percent, and been deprived of the majority they already held. A BBC News political editor encapsulated the performance in a single sentence: “May’s gamble has spectacularly backfired.”

The result vindicates those pollsters which identified a Labour surge in the final weeks of the contest. Jeremy Corbyn’s embrace of his outsider status, something that has made him an ineffective leader of the opposition, allowed him to tap into anti-Westminster sentiment on the campaign trail. Perversely, talk of a sweeping Tory majority encouraged traditional Labour voters to realign with their party, despite concerns about the way it is being led. In addition, young voters—the only demograhic in which Labour is favored—turned out in higher numbers than usual, having been swept into activism during last year’s referendum campaign. By contrast, May’s campaign was defined by an embarrassing controversy regarding a property tax proposal. The policy angered many natural Tory supporters, and May’s abrupt U-turn in the days afterwards made made a mockery of her promise to provide the country with “strong and stable” leadership.

As the campaign progressed, Brexit—which has been the dominant issue in British political life for a year—gradually gave way to a traditional battle over taxes, spending and austerity. By its conclusion, almost all issues were secondary. Even the terrorist attacks in Manchester and London came to see through that lens, with attention quickly turning to recent cuts in policing numbers.

Countering a long running trend, the party system reverted to a classic left-right dynamic, with 85 percent of ballots cast for the two main parties. That not only made a narrower result more likely, but crushed smaller parties. Having won fifty-six of fifty-nine seats in Scotland two years ago, the Scottish National Party lost over twenty seats. Divided in 2015, unionist sentiment tended to unite behind whichever candidate from the two mainstream parties was best placed to topple the Scottish National Party incumbent. The party’s leader at Westminster, Angus Robertson, and its leader at the time of the 2014 referendum campaign, Alex Salmond, were both unseated. As a result, the nationalists’ position—and their case for a second referendum on independence—has been significantly undermined. The pro-EU Liberal Democrats fared no better. Nick Clegg—deputy prime minister in the 2010–15 coalition government—was defeated, and the party’s leader survived by just a few hundred votes.

Though its resonance as a campaign issue dwindled, the focus on Brexit will return with a vengeance in the new parliament. Opponents of the United Kingdom’s withdrawal from the EU feared that a big Tory majority would allow the government to ride roughshod over opposition and seek a “hard Brexit,” in which the United Kingdom withdraws from the EU single market in order to clamp down on immigration. Yet the Tories’ perilous parliamentary position may end up having just the same effect. With next to no freedom of maneuver, Theresa May will now struggle to build intraparty consensus on the United Kingdom’s negotiating position, especially if it involves compromise with Brussels.

That presupposes that May will be able to remain in office. Despite a grueling—and at times excruciating—campaign, the coming months will offer no respite. Her decision to call a poll, and the ineffective campaign that followed, have damaged her standing. Though she has evinced no intention of standing down as prime minister or Conservative leader, she will return to Westminster mocked by her adversaries, and closely scrutinized by her colleagues. In the coming days, the ruthlessness with which Conservative backbenchers critique their leaders—something which ended Margaret Thatcher’s premiership and defined John Major’s premiership—will make a sudden reappearance. Those pressures may ultimately prove insurmountable.