How the Trump Administration Can Cope with Obama's Arab Spring 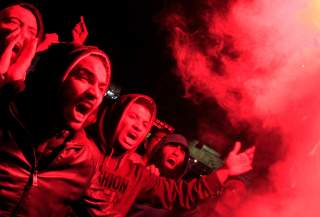 Now that the Senate has finally confirmed an assistant secretary of state for Africa and President Donald Trump’s National Security Council has a senior director for Africa, it is time for America to revamp its policies in the region. If it does not encourage economic growth and representative government, then terrorist attacks and destabilizing emigration will devastate Europe and the United States.

The most disruptive element in the Arab world is not oil, but people. Waves of migrants who head for the shores and safety of America’s NATO allies in Europe—as well as the millions of young Arabs and Africans who stay home. The youth movements still threaten to topple America’s allies in Arab lands. The so-called Arab Spring is not over, it has simply retreated from Western headlines. Most migration and domestic unrest have the same underlying causes.

Looking back at the “Arab Spring” movements of 2010 and 2011, we see two main root causes, although other regional and local factors play a supporting role.

One leading cause is demographics. Arab societies are a pyramid, with a small peak of the population over sixty years of age, a significant middle between thirty and sixty years old, and a massive base under the age of thirty.  In Morocco, Algeria and Tunisia countries, people under the age of thirty account for more than half of the population. While increased educational opportunities for girls and women have lowered the fertility rate, it stubbornly remains above two children per woman of childbearing age. In short, it is above the renewal rate, which means that the population will continue to grow for the foreseeable future. This is the opposite of the demographic reality in Europe and much of the industrialized world.

Economic and political aspirations are also among the contributing factors. Arabs under thirty universally demand jobs, economic growth, and a say in the system that governs them. They want freer economies that allow firms to form easily and create jobs with wages that allow them to marry and raise families. They want freer governments that do not stifle their economic aspirations with bureaucratic demands for licenses (and sometimes demands for bribes to skirt the regulatory maze) and government officials that hear their concerns.

This is precisely what demonstrators said at the beginning of the Arab Spring and these fundamental demands have not changed.

What changed was the movement’s leadership. In many Arab nations, the Muslim Brotherhood and other radical Islamist groups seized control of the protests because they had pre-existing underground organizations that were practiced at subversion. Once the Brotherhood was in charge, the demands became more religious and symbolic—and popular support for the uprisings evaporated.

Now the youth movements have reemerged on social media, where Facebook and Twitter enable youth leaders to reach virtual crowds of people under the age of thirty. In this digital realm, the Brotherhood “street enforcers”—those who can intimidate or beat down dissenters—have no power. Government agents also do not have any power. As a result, leaders seeking economic growth and representative government now command large followings online and present a growing challenge to some Arab governments.

Two countries have escaped this turmoil because the political systems have shown agility: Jordan and Morocco. Interestingly, both nations are monarchies, among the oldest form of government. Still, they seem best equipped to deal with digital challenges.

In Morocco, King Mohammed VI, in a historic March 9, 2011, speech, called for electing a new government to run domestic affairs while safeguarding the rights of women and religious minorities (mainly the Jews). The Arab Spring movement in Morocco all but dissolved after the constitution was ratified by the people and a new government was elected. The youth had gotten what they wanted: a freer economy and freer government, accountable to the people themselves.

Economic growth and job creation remain sore spots. While the economies of Morocco and other Maghreb countries grow at more than 3 percent, unemployment remains higher than 9 percent—slightly higher among the politically active under thirty crowd.

Jobless protesters have returned to the streets and social-media networks are flooded with angry messages that indicate the youth have lost faith in all political parties. Some desperate youth have become violent and sometimes verbally attack the symbols of the state and the king himself.

As domestic unrest builds, desire for migration grows alongside it.

Only nine miles of water separate Morocco from Spain. Smugglers are happy to carry young people across the channel that separates the Third World from the First—for cash. Mafias have emerged to ferry their economic migrants and they often get into shootouts with the navies of Morocco and Spain. This year, hundreds have died near the mouth of the Mediterranean, hoping for a better life.

Therefore, the need for reform is urgent. Morocco’s economy needs to expand its economy by at least 7 percent per year just to absorb the young people leaving school and joining the workforce.

Yet the king’s hands are tied by the 2011 democratic constitution. He cannot replace the government nor manage the bureaucracy. His role is to guarantee the stability of the country by offering a vision, to chart a course that the elected government can adopt.

And, he has done that. He has outlined a bold vision in a series of speeches, the last one was delivered in parliament on October 12.

He proposed a new model of development, which strengthens social cohesion and regional equity. The model also increases opportunities for farmers, small-business owners, and professionals.

This is a huge project because the current model concentrated efforts on particular industrial sectors, like auto manufacturing. While Renault has opened a plant near Tangier and other car-parts factories are opening, it is not enough. It does not solve the crisis of youth unemployment and address the inequalities between urban and rural areas.

If this vision is implemented, it could make Morocco a laboratory for the whole region.

But this new approach must be supported by American leadership. Morocco, already a partner in fighting terrorism, should become a partner in economic growth and political reform. Morocco will need America’s help with international institutions, including the World Bank and the International Monetary Fund, and it will need its public support in speeches and public statements. A shared vision of economic growth and democratic government would satisfy the youth movements and transform the Arab world, slowing the flow of migration (which is economically and politically destabilizing in Europe).

If America ignores this opportunity, then the consequences could be tragic. There will be more migrant deaths on the high seas and more unrest in Europe. And, if the youth movements come to believe that democracy cannot deliver jobs and hope, there will be a renewed interest in Islamic extremism. Dissent will switch from tweets to bombs, which will explode in Casablanca and outside the White House.