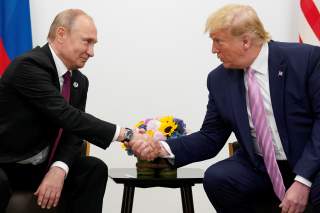 A LITTLE over a century ago, President Theodore Roosevelt got an early glimpse into the makings of history’s greatest manmade catastrophe. In 1904, he observed that Germany’s Kaiser Wilhelm II

believes that the English are planning to attack him and smash his fleet, and perhaps join with France in a war to the death against him. As a matter of fact, the English harbour no such intentions, but are themselves in a condition of panic terror lest the Kaiser secretly intend to form an alliance against them with France or Russia, or both, to destroy their fleet and blot out the British empire from the map. It is as funny a case as I have ever seen of mutual distrust and fear bringing two peoples to the verge of war.

The case’s denouement proved not so funny. As Europe stumbled unawares toward disaster some ten years later, the British and Germans had attempted to assure each other that they had no aggressive intent. But because each government knew that its own intentions were defensive, it could not grasp why the other would claim to feel threatened. It regarded the other’s self-professed fears as disingenuous—indeed, as proofs of the other side’s mendacity and aggressive ambitions. Efforts to reassure and resolve only made the problem worse, compounding a number of other factors that ultimately combined to produce Europe-wide conflagration. As historian Barbara Tuchman later put it in her classic history of the descent into war, “the nations were caught in a trap … a trap from which there was, and has been, no exit.”

World War I resulted more from miscalculation and ineptitude than from design. Historians have long debated which of the combatants bore the most responsibility for the conflict, but few dispute that “each of the major powers contributed its quota of shortsightedness and irresponsibility” to the disaster. Germany feared encirclement by France, Russia and Britain, but ham-handedly threatened each in ways that encouraged them to unite in an unprecedented alliance against Berlin. That alliance, in turn, cemented Germany’s dependence on Austria-Hungary and ultimately made it a hostage to its southern neighbor’s actions. Britain believed the alliance would contain Germany’s growing military and economic might, not lock London into a set of rigid commitments that made diplomatic resolution of a localized conflict all but impossible. Austria-Hungary’s fear that nationalism could tear its empire apart from within blinded it to the dangers that a limited war in the Balkans could spin quickly into a catastrophic European conflagration. Tsar Nicholas II assumed that a limited mobilization against Austria-Hungary could deter aggression against Russia’s friend, Serbia, only to learn that his general staff’s war plans mandated a full mobilization against both Austria-Hungary and Germany. The spread of railway technology, in turn, meant that any state that did not mobilize its army quickly in response faced the near-certain prospect of a rapid military defeat. The result was a potent mix of volatile ingredients that fueled what Henry Kissinger called “a political doomsday machine,” susceptible to any number of potential triggers.

Few people in Washington today believe that our tense relations with Russia pose this type of challenge. Rather, the dominant paradigm for understanding and responding to the Russian threat is the World War II problem. American editorials and op-ed columns about Russia abound with disparaging references to Munich, where British prime minister Neville Chamberlain made his tragic bid to appease Hitler’s territorial ambitions in 1938 and achieved his ill-fated “peace in our time.” During the 2016 U.S. presidential campaign, Democratic party candidate Hillary Clinton explicitly warned that Moscow’s claims that it must protect Russian minorities in Ukraine echoed Nazi Germany’s arguments that it “had to protect German minorities in Poland and Czechoslovakia.” Similarly, Senator Lindsey Graham and many other Republicans have likened Russian president Vladimir Putin to Adolph Hitler, while newspaper columnists refer to him as “Putler.” Like Hitler, Putin is perceived as an authoritarian leader harboring deep resentments over lost territory and unfair treatment. Like Hitler, Putin is believed to regard calls for diplomatic compromise as signs of weakness that he can exploit. Like Hitler, Putin is thought to harbor expansionist designs that will be curbed only by pushing back now before he grows too bold and too strong.

For those who see the Russian threat through this prism, the chief danger is the Kremlin’s aggressive intentions, and the imperative is to deter aggression through strength. Wars often happen because those who start them think they can win. For intelligence analysts, this concern translates into a focus on studying Russian war plans and weapons systems while looking for signs of impending attack. U.S. and NATO military experts analyzing Russia’s preparations for its large Zapad (West) military exercise in 2017, for example, issued warnings that the event could be “a Russian Trojan horse” masking preparations for occupying Belarus or invading one of the Baltic states. British intelligence officials caution that Russian cyber operators have acquired the ability to shut down power plants, hijack air traffic control and even turn off air conditioning systems. U.S. Intelligence Community leaders sound alarms about Moscow’s desire to undermine Western democracies and destroy the “post-World War II international order.” Hollywood actor Morgan Freeman, sponsored by a committee that included former Director of National Intelligence James Clapper, solemnly warned Americans in a viral social media video that we are at war with Russia and must fight back or suffer defeat.

For policymakers, this prism focuses on demonstrating the will to fight and the ability to triumph. Diplomacy plays a minor role in dealing with World War II-type aggression. One does not strike deals with aggressor states, one punishes and isolates them. Failure to resist Russia’s aggression in Georgia, Ukraine, Syria and the cyber sphere only invites more aggression. Strength and resolve, on the other hand, prompt the would-be aggressor to back down and look elsewhere for easier conquests. The Trump administration’s National Security Strategy largely reflects this broad consensus: “Experience suggests that the willingness of rivals to abandon or forgo aggression depends on their perception of US strength and the vitality of our alliances.” To paraphrase the old Roman aphorism, if we want peace, we must show ourselves ready and willing to fight a war.

Not everyone views Russia as offensive-minded, however. A smaller and less popular school of thought sees Russia under Putin as a weak and declining power fighting a defensive battle against NATO’s eastward expansion and Washington’s efforts to transform Russia’s internal politics. “Putin has been primarily reactive,” according to New York University professor emeritus Stephen Cohen. Realist scholar John Mearsheimer puts it even more bluntly: Russia’s actions, including its annexation of Crimea and proxy war in eastern Ukraine, “have been defensive, not offensive … motivated by legitimate security concerns.” Adherents of this school are wont to quote George F. Kennan, the father of America’s Cold War containment strategy, on the likely consequences of NATO expansion some twenty years ago: “There is going to be a bad reaction from Russia, and then [the NATO expanders] will say that we always told you that is how the Russians are—but this is just wrong.’’ Russia is not, he said, “a country dying to attack Western Europe.” Russia is not Nazi Germany, nor is Putin comparable to Hitler. For these analysts, such analogies not only produce more emotional heat than analytic light, but they also lead to policy responses that are dangerous.

Those in the “defensive Russia” school point out that when a country’s hostile actions are rooted in fear and vulnerability, the unwavering resolve and military readiness that are so vital to dealing with a Hitler-type threat can be counter-productive. Rather than averting aggression by demonstrating the will to fight back, coercive steps against a state that already sees itself as threatened can magnify perceptions of vulnerability and kick off a dangerous escalatory reaction. They point out that the United States experienced this phenomenon in the former Soviet republic of Georgia in 2008. Convinced that Russia harbored aggressive designs on its southern neighbor, Washington policymakers accelerated U.S. military training of Georgia, openly advocated bringing Tbilisi into the NATO alliance, and issued multiple warnings to Moscow against military action, believing this firm support would deter Russian aggression. It in fact had the opposite effect. Russia grew increasingly alarmed by the prospect of Georgian membership in NATO, while Tbilisi felt emboldened by American support to launch a military operation in the breakaway Georgian region of South Ossetia, which produced an immediate and massive Russian military response that included a coordinated set of cyberattacks. The result was a readily foreseeable war that the United States failed to avert, leaving the White House with an unpalatable choice between ineffectually protesting Russia’s conquest of Georgia’s breakaway regions, or threatening nuclear war in response to Russia’s local conventional superiority.

For those who perceive Moscow to be playing defense, the preferred policy response is largely Hippocratic and diplomatic: stop doing harm by threatening the threatened state, and start talking about compromise and conflict resolution. Cohen argues against reintroducing intermediate-range missiles in Europe and selling weapons to Ukraine, for example, and calls instead for cooperating against shared threats and reaching agreement on new rules to govern the relationship. Mearsheimer proposes ending what he calls the “triple package of policies,” NATO expansion, European Union (EU) enlargement and democracy promotion. The goal for Ukraine, and presumably for other states in the “gray zone” between Russia and the NATO alliance, he avers, should be to “abandon [the] plan to westernize Ukraine and instead aim to make it a neutral buffer between NATO and Russia, akin to Austria’s position during the Cold War.” If we want peace with Russia, they reason, we need to stress common ground and compromise, not weapons and sanctions.