How Trump Can Deal with North Korea's Pre-Summit Outburst 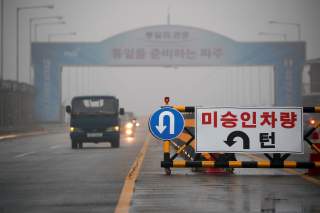 This week’s North Korean outburst—threatening to derail the summit between U.S. President Donald Trump and North Korean leader Kim Jong-un—prompts some tough questions about what precisely we might be able to get out of the North at the Singapore summit. We likely need to dial down our expectations—a lot, in fact.

To date, things seemed to be going well. The North has sent consistently good signals this spring. While its concessions were low-hanging fruit, or arguably not concessions at all, they did keep the momentum alive. Judged against last year’s rhetoric, this year has been progress. And the inter-Korean summit, while regrettably too thin on detail, raised expectations through its dramatic symbolism. South Korean President Moon’s approval rating is in the 80 percent range, and approval of the summit close to 90 percent. The hawkish pushback in South Korea so far has been tepid.

In the United States, this enthusiasm arguably morphed into a triumphalism, particularly from Trump’s surrogates and devotees. Trump’s fans and sympathetic pundits began claiming, without much evidence, that North Korea had been bludgeoned into negotiating by Trump’s rhetoric and sanctions. Indeed, the curious notion that Trump should win a Nobel Peace Prize began to take hold, and the president clearly enjoyed the chants of ‘Nobel!’ at his campaign-style rallies. Just yesterday, Piers Morgan asked me if I thought Trump deserved two or just one Nobel.

This emerging narrative of North Korea’s capitulation clearly got through to Kim Jong-un and Northern elites who told U.S. Secretary of State Mike Pompeo that they were watching American television coverage. The Korean Central News Agency (KCNA) statement indicated obvious annoyance with the framing of Kim’s attendance at the Singapore summit as some kind of supplication. The North Koreans insisted that they will not be treated as Iraq and Libya were by the United States.

North Korean negotiators have long insisted that Saddam Hussein would never have been tipped if he had had nuclear weapons. Similarly, the North has noted that Muammar Qaddafii agreed to a deal with President George W. Bush’s administration to give up its nuclear weapons program in exchange for a security guarantee. Yet a few years later, during the Arab Spring revolution in Libya, the United States and NATO helped the revolutionaries tip Qaddafii, who then met a grisly end. North Korean negotiators have for years said its nuclear weapons prevent that type of scenario from occurring to them.

This is likely the reason for the sharp KCNA focus on National Security Advisor John Bolton and his promotion of a ‘Libya model.’ Libya, to Pyongyang, represents everything about a American nuclear deal they fear—going completely to zero only to see the United States cheat on the deal with ensuing regime change and the violent death of the elite. Indeed, it is rather surprising that Bolton did not see this obvious connection and stumbled into this.

The question now then is what will the newly recalcitrant North Korea give us at Singapore? Few analysts actually believed that the North would offer complete verifiable irreversible disarmament (CVID). After forty years of effort to develop nuclear weapons, it would have been astonishing if the North were to suddenly offer that. Curiously, U.S. officials kept talking this up though, eventually sparking this pushback and threat to the summit. CVID is clearly not in the cards, and we need to start thinking about what kinds of sub-CVID offers we will entertain.

One idea floating around is that North Korea might give up a few weapons to get the ball rolling and convince the United States that it is serious and not playing for time or for the imagery of Kim meeting Trump as equals. This is ideal actually, as it undercuts the pressure for grand bargain to wrap things up all at once in Singapore. A final deal will be really hard to strike in just the few weeks we have left, and Trump is not preparing for the summit, suggesting it may fall through because he simply does not understand the issues. On the other hand, a small give of weapons from the North could be reciprocate by a small U.S.-South Korean concession, and then, as trust is built up over a series of concessions and counter-concessions, we could push for a large deal, rather than reach for it all at once.

Another emergent option—to avoid—is the decoupling one, which explicitly prioritizes American security over that of U.S. allies in the region. Here, the United States would accept North Korean elimination of its intercontinental ballistic missiles—which could strike the United States—for some kind of U.S. pullback in the region and North Korea’s retention of a local nuclear deterrent. That would effectively split the United States from South Korea and Japan, and undercut the United States long-term position in Asia. South Korea and Japan would then have obvious incentives to cut side-deals—which amounts to finlandization in effect—with North Korea and China, as the United States’ extended deterrence would be less credible. This is tantamount to the slow end of the U.S. position in Asia. Perhaps Trump himself, with his disdain for U.S. allies, does not mind that—but much of official Washington supports a deep American involvement in Asia which decoupling would sacrifice.

There is no obvious answer for what the United States should surrender in exchange for what from the North. But this week’s KCNA outburst should end the notion that a final deal, which good for the United States and its allies, is within reach at Singapore. Certainly, a deal could be struck quickly if we simply give up a lot. But of course we should not do that. To get a balance-positive deal for the democracies we should probably kick the meat of discussion back to the working level so that we can hammer out a better one without the glare and rush of the Singapore deadline.