How Trump Can Ease U.S.-China Tensions: Honor Their Shared History 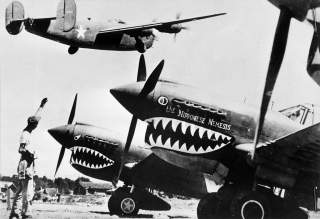 There have been countless remembrances for the centenary of World War I. Even I am guilty of piling on to that fashionable theme, perhaps even more than once. And that massive conflict did not even directly touch China. The same could not be said of the even larger conflagration of World War II, which ravaged China completely. Indeed, the bloodletting in China began several years prior to the war in Europe, with Japan’s invasion assuming a massive and devastating scale in the dark year of 1937.

Into that cauldron journeyed the intrepid Claire Lee Chennault, a dashing Army Air Force pilot who retired in frustration as his service failed to embrace his innovative tactics with “pursuit planes” or fighters. To be sure, there will be plenty of discussion about fateful 1937 this year—count on it. Indeed, the world should spend more time reflecting on one of the war’s most barbaric atrocities, namely the Nanjing Massacre, which occurred in December 1937. That is when the Imperial Japanese Army slaughtered perhaps three hundred thousand innocent Chinese in a hapless attempt to brutalize the Chinese people and compel them to surrender. Debates will rage through this fall about apologies and failed apologies, as they should. But let us, as Americans, take pride in our own heroes from that dark time in China. The American Volunteer Group, organized and led by Chennault and later known as the “Flying Tigers” [飞虎队], stood in the breach at the most perilous moment, not unlike the Greeks during the Battle of Thermopylae. What ultimately is the legacy of this dazzling American gallantry and sacrifice in China for contemporary U.S. foreign policy and defense policy?

It is noteworthy that these heroes are fervently revered in today’s China, despite the growing geopolitical and ideological chill in relations between Washington, DC and Beijing. On Chinese news channel 13, the military-oriented news program Military Intelligence [军情] aired two thirty-minute segments about the Flying Tigers in February 2017. Hardly light-hearted treatments, the segments showcased lengthy interviews with several surviving pilots and featured computer simulations from dozens of aerial engagements. China’s passion for the Flying Tigers runs deep these days. It is quite common to see stories about the Flying Tigers or graphics illustrating their exploits in the Chinese aviation magazine Aerospace Knowledge [航空知识]. For example, one recent article relayed the story of American volunteer pilot Robert Short, who was killed in combat while flying for the Chinese Air Force, several years before the Flying Tigers’ first official combat mission on December 20, 1941.

The essence of the spirit of the Flying Tigers was their staggering success in the face of enormous odds. During that first engagement, just about a week after Pearl Harbor, the Flying Tigers took nine out of ten Japanese bombers on a raid in China’s southern Yunnan Province. Employing the somewhat obsolete P-40 Tomahawk, Chennault forbade his pilots to go head-to-head in dogfights with the much more maneuverable Japanese Zeros, which could turn and climb much faster than the Tomahawk. Instead, he innovated special hit-and-run tactics that proved devastating. For example, out of the 166 Japanese planes dispatched to strike Rangoon on February 25, 1942, twenty-four went down in flames. An even larger force of two hundred bombers was dispatched the following day and eighteen Japanese aircraft were lost to the brazen American flyers. Adding yet more glory to the Flying Tigers was their rugged approach and disdain for military discipline and formality. In order to keep the rickety planes flying, crews were forced to scavenge parts from crashes in nearby jungles and rice paddies.

Of course, the Flying Tigers were hardly the only U.S. combat unit to achieve such stunning feats in World War II. But their well-justified fame derives from timing. This was truly America’s darkest hour during World War II, as the Japanese Navy rampaged through the Pacific and conquered one American bastion after another. No wonder President Franklin Roosevelt said in April 1942 that “the outstanding gallantry and conspicuous daring that the American Volunteer Group combined with their unbelievable efficiency is a source of tremendous pride throughout the whole of America.”

In addition to the multitude of articles now frequently appearing in the Chinese defense press and documentary-type films on CCTV-13 this February, a much larger commitment to the legacy of the Flying Tigers is the new museum, which was constructed outside the mountain resort town of Guilin and completed in 2015. I visited the superb museum a few months ago and was surprised that my hotel had no information about the museum. To me, that suggested the Chinese (at least locally) may not realize the remarkable significance of this site for U.S.-China relations. The museum is located at the Yang Tang Air Base, where the Flying Tigers performed missions in southern China. A cave used by Chennault has been restored and is now part of the museum. The exhibition halls are not small, and the history is related faithfully and in extraordinary detail, down to the level of individual pilots and their remarkable feats of combat bravery. Highlights include a larger-than-life portrait of Chennault and a well-maintained C-47 Commando transport aircraft that was built to scale. The aircraft sits outside the museum and commemorates the parallel extraordinary effort to supply beleaguered Chinese forces over the “Hump”—the forbidding Himalayas. An especially poignant room in the museum shows numerous photographs of burials of American “martyrs” [阵亡]. Outside of this impressive museum, Chinese and American flags flutter side by side in the mountain breeze.

There are many reasons whispered in Washington corridors why the United States should not cooperate with China in the military security domain. Most commonly, it is asserted that cooperative activities enhance Chinese military capabilities, give away too much information about U.S. forces and legitimize China’s expansive military modernization effort. After following U.S.-China strategic interaction over nearly two decades, I still do not find these arguments to be particularly persuasive. To the contrary, there is considerable leverage and strategic benefit to be had in the fact that the Chinese armed forces intensely admire the technical proficiency of the U.S. armed forces. Not long ago, I had the interesting experience of witnessing firsthand a spectacle in which one of our foremost military leaders attempted to persuade a large and very skeptical crowd of American national-security experts that the United States must energetically engage with the People’s Liberation Army to build habits of trust and cooperation. Is it any wonder that those entrusted with the forces and plans that would operate in the violent cataclysm of a hypothetical Chinese-U.S. military conflict so often turn out to be major exponents of engagement and cooperation? They understand that the alternative is all too bleak to entertain.

The year 2017 will be one of remembrance in the Asia-Pacific region. These memories are certain to cause many across the region to feel a certain amount of discomfort. No country in the region is innocent of grave crimes visited against more vulnerable peoples—neither the United States nor China—but the bloody Pacific War undoubtedly deserves special attention for its scale and the cruelty it inflicted upon innocents. Many Americans are ignorant of the history of Japanese aggression in China, a problem that could be partially remedied by this important German film, which should be mandatory viewing for all students of Asia-Pacific studies. Worse still, few Americans understand the extensive atrocities meted out by the Japanese against America’s most heroic servicemen, even if they are dimly aware of Pearl Harbor and the crime of the Bataan Death March. We should not shrink from this history. The whole region would be better off if, instead of blindly “looking only forward,” it agonized through the many painful chapters of history to reach a deeper understanding on the need to maintain peace in the region.

A good place to start this year of remembrance would be in recognizing the extraordinary heroism of the brave American flyboys who pulled off miracles to help China against nearly impossible odds. Their noble exploits have been hardly diminished by time. Perhaps President Trump will see fit to toast the Flying Tigers when he meets President Xi Jinping in Florida in April? Better yet, he should make the time to pay homage to their role in history and visit the new Flying Tigers Museum in Guilin on his first trip to China. Such a visit would be hugely symbolic and meaningful for America and China.

Image: Liberator bomber with P-40 fighter planes at a U.S. base in China, 1943. Wikimedia Commons/Public domain