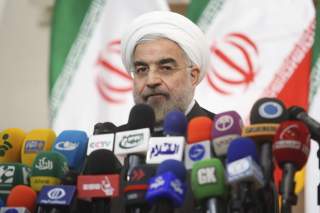 IN ABANDONING the nuclear deal with Iran, the Trump administration disrupted an international consensus on how to deal with Tehran. U.S. policy toward Iran will now be a story of attempted recovery from the failures of that disruption. Domestic politics drove the original decision to confront Iran, and domestic politics, in an election year, will shape Donald Trump’s attempts at avoiding war. Any hope of salvaging success will require significant change in Trump’s policy, some hints of which have already appeared. Iran, too, has changed, but in unhelpful ways that will make the recovery process all the more difficult.

THE TOO-EASILY-FORGOTTEN background to the current mess was broad agreement—expressed most strongly by proponents of a hard line toward Iran—that the sine qua non of Iran policy was to prevent an Iranian nuclear weapon. The response to that broadly-held concern was the Joint Comprehensive Plan of Action (JCPOA), a multilateral agreement that—by disposing of stockpiles of enriched uranium, filling nuclear reactors with cement and a host of other measures—closed all possible paths to such a weapon and imposed an intrusive system of international monitoring to assure the world that they stayed closed. The international consensus on the subject took the form of United Nations Security Council Resolution 2231, which passed unanimously in 2015 and was the Council’s formal blessing of the JCPOA.

The Trump administration’s reneging, beginning in 2018, on U.S. obligations under the JCPOA was foreshadowed by earlier Republican attempts during the Obama administration to sabotage the negotiation of the agreement. Both the earlier sabotage and the later reneging were motivated by the identification of Barack Obama with the JCPOA. That the agreement was a signal foreign policy accomplishment of this Democratic president was reason enough to try to destroy it. A complementary motivation was opposition to the agreement by the Israeli government of Benjamin Netanyahu, whose unrelenting push to keep Iran ostracized served several political purposes, including promoting Israel’s relations with the Gulf Arab monarchies and diverting international attention from Israel’s own policies. The position of that government had, as always, profound political implications in the United States, even though in this case the JCPOA’s closing of all paths to an Iranian nuclear weapon was clearly in Israel’s interests, as many former senior Israeli security officials stated.

Vague references to a “better deal” did not clarify the Trump administration’s desired end game. Different players in the administration had differing desires. Especially evident was a division between Trump, who wants deals, and his former National Security Advisor John Bolton, who always wanted a war. For a while after the initial reneging in mid-2018, the differences did not seem to matter. As U.S. violations of the JCPOA escalated into unrestricted economic warfare against Iran, the administration pointed to the significant damage inflicted on the Iranian economy as if that were ipso facto a positive achievement. The administration took satisfaction in how the private sector’s fear of losing access to U.S. markets undermined European governments’ efforts to circumvent secondary U.S. sanctions. The administration’s policies did not even seem to dent the existing nuclear restrictions on Iran. For a year after the United States reneged on the JCPOA, Iran—reaffirming its commitment to the agreement and expressing its desire for full compliance with it—continued to observe its own obligations under the accord.

By mid-2019, however, it was impossible to ignore how the “maximum pressure” campaign was failing on every front. Iran’s patience ran out when the Trump administration ended the last of the waivers of sanctions it had placed on purchasers of Iranian oil. Tehran then began a series of small, incremental moves beyond the JCPOA’s limits on the amount of enriched uranium that Iran could stockpile and the level of enrichment. Using the same strategy it employed before the JCPOA was negotiated, Tehran gradually ramped up its nuclear activity to pressure the United States and other foreign states to negotiate seriously about sanctions relief. Iran, in other words, has been responding to maximum pressure with pressure of its own.

The nuclear program is still below the levels it reached before the JCPOA deconstructed most of that program, and nowhere near the ability to construct a nuclear weapon. With each of its incremental steps, Iran has emphasized that what it has done is easily reversible and that its objective is a return of everyone to full compliance with the JCPOA. But for the time being, the result has not been a move toward a “better deal” but instead a series of moves in the opposite direction. Iran will continue the gradual expansion of its nuclear program as long as the maximum pressure campaign continues.

A SIMILAR story is unfolding regarding what gets vaguely but routinely labeled as “malign” or “nefarious” Iranian activity in the Middle East. The Trump administration has contended that this is the front where its economic warfare is most effective, because crimping Iran’s economic resources, the argument goes, forces Iran to curtail its regional activity whether or not Tehran signs any new agreements. But there was no discernible curtailment of Iran’s regional activity when the pressure campaign started in 2018, any more than there was any discernible expansion of that activity when the JCPOA went into effect in 2015 and Iran gained some sanctions relief. Iran does what it does in the region not according to the level of its financial resources but instead for what it regards as security reasons. Any changes in that activity have almost always been in response to someone else’s activity in the region, whether it was what Saudi Arabia was doing in Yemen, what insurgents were doing in Syria or what the Islamic State was doing in Iraq. Press reports about increased financial strains in Iran’s ally Hezbollah, for example, have not been accompanied by a corresponding reduction of Hezbollah activities on the ground.

This picture worsened in the spring of 2019 as the Trump administration escalated its economic warfare with an attempt to reduce Iranian oil exports to zero. The Iranian regime, in continuing its strategy of meeting pressure with pressure, escalated in response. Despite Iranian denials, it is widely believed to have been behind the May 2019 sabotage of two Saudi oil tankers and two other vessels off the coast of the United Arab Emirates. More dramatic, and with greater immediate impact on the oil trade, was an unmanned aerial attack on Saudi Arabia’s Khurais oil field and the critical Abqaiq oil processing facility in September of the same year.

Iran was doing nothing of the sort prior to the U.S. maximum pressure campaign, and had no reason to do so. Iranian leaders have been acutely aware of how attacks on anyone else’s oil exports would invite reprisals that would damage Iran’s own oil trade. Iran’s incentives in this regard changed markedly when the Trump administration endeavored to destroy Iran’s oil trade anyway. Tehran no longer had anything to lose. Iranian leaders have explicitly stated that if Iran cannot export its oil, then other Persian Gulf producers will not be able to either. Attacks such as the one against Abqaiq were a step toward making good on this threat.

The attacks also served what in Western strategic jargon is called “establishing deterrence.” They demonstrated, to the Saudis as well as others, Iranian willingness and ability to inflict major damage across the Gulf in the event of a military attack against Iran. The message-sending nature of the operations was underscored by how they were aimed at economically vital targets but inflicted few to no human casualties.

In short, if damaging Iranian regional activity is a worry, that activity has gotten much worse since the Trump administration’s pressure campaign kicked into high gear. Iran’s actions in this regard are clearly a direct response to the administration’s policies.

A FINAL front on which to measure the results of the maximum pressure campaign—one that should be of special interest to those longing for regime change in Iran—is the effect on politics inside Iran. Two patterns stand out. One is that Iranian hardliners have risen in influence since the United States reneged on the JCPOA. Leaders who were involved in negotiating the JCPOA—notably President Hassan Rouhani and Foreign Minister Javad Zarif—have been on the defensive. The hardliners’ “we told you so” line about the hazards of negotiating with the perfidious Americans has been difficult to rebut. Supreme Leader Ali Khamenei, who gave Rouhani and Zarif room to negotiate the agreement but was careful to leave himself room to dissociate himself from the result if it went sour, has taken the same line. The increased clout of the hardliners, reflected in their capturing some important senior government positions in the last several months, represents another front in which the effects of the Trump administration’s nothing-but-pressure policy have been in the opposite direction from what was advertised.

The other pattern inside Iran is that the economic hardship from sanctions is not translating into revolutionary upheaval. This has been true even of the most serious economically-driven protests in Iran since the start of maximum pressure, after the regime increased in November 2019 the price of still heavily subsidized fuel. There is no evidence that the Islamic Republic is anywhere close to collapse.