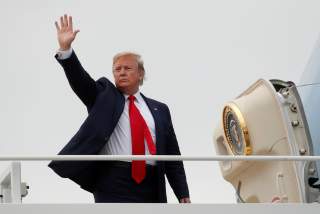 President Donald Trump has tweeted that he wants to prevent a dangerous and costly nuclear arms race between the United States and Russia, and prevent a new one with China, by negotiating a new three-way treaty among those nuclear states.

The president’s new interest in nuclear arms control, in part, may stem from the conclusion of the Mueller investigation. Thus, he may believe he now has some political room to work on issues of importance with Russia and possibly explore a new, historic nuclear reduction deal.

Whatever the reason, this new interest should come as welcome news.

It has been a decade since Washington and Moscow concluded their last nuclear accord, the so-called New START agreement, and the two powers, which still possess 95 percent of the world’s nuclear weapons, are both aggressively modernizing their nuclear arsenals.

For Russia, this work includes a new generation of “heavy” intercontinental-range missiles and completely new systems, such as long-range underwater drones and nuclear-powered cruise missiles. America’s modernization program would replace its entire nuclear “triad” of land and sea-based missiles and long-range bombers at a cost of $1.5 trillion or more.

Reflecting on both the dangers and the costs involved in another round of the arms race, the president now says he wants far-reaching new agreements with Russia that would bring China into the process for the first time.

Trying to halt Russian nuclear modernization and expanding arms control to China is a big idea, and a good one. Especially, in the case of China, however, it is extremely ambitious: China’s nuclear arsenal is a tenth the size of the Russian and American inventories, and Beijing would never accept an outcome that locked it into an inferior status to Washington and Moscow.

The problem is not with the big idea, but in going big too soon. Trying to expand nuclear deals to include China now may seem like a good idea, but in practice, it will have little or no chance of being achieved. Rather the problem with the president’s concept is trying to do too much too soon. Our experience in the arms control over the last thirty years suggests a more measured, three-phase approach makes more sense and can achieve the same outcome albeit on a longer time-scale. This plan gets the president where he wants to go and where, in our view, the nation needs to go.

In the first phase, as early as the Osaka G-20 meeting in late June, Trump and Vladimir Putin should agree to the immediate and unconditional extension of the New START accord. Now set to expire in 2021, the agreement can be extended without Congressional or Russian Duma approval by another five years. This would guarantee nuclear predictability well into the next decade. Republicans and Democrats in the Senate should welcome a move they already approved in 2010.

Extending New START would enable the two sides to quickly enter the second phase—expanding and deepening nuclear reductions with Russia. The goal should be to reduce American and Russian deployed nuclear warheads down to approximately 1000 each, building on the New START framework. But this is not enough. A new U.S.-Russian negotiation would also need to address additional issues of concern for both parties. For Washington, this would include Russia’s considerable advantage in shorter-range “sub-strategic” weapons that threaten our allies in Europe and Asia and our forces deployed abroad. Moscow, for its part, will want to limit U.S. missile defense systems, as well as a new generation of conventionally-armed, precision-strike weapons.

None of this will be easy and, as has been the case in the past, a new American-Russian agreement could take years to achieve. But if the two sides are able to reduce their strategic offensive forces down to lower levels while also expanding limits to include tactical weapons and missile defense systems, then we believe the stage will be set for the third phase of the process, bringing China into the mix.

This is only likely to happen if the reductions laid out in a new agreement are enough to entice the Chinese. But it will be important for Washington and Moscow to keep their expectations realistic. China, at least at the outset of any negotiating process, will probably only be prepared to discuss general principles for nuclear restraint rather than strict, verifiable limits. But even this would be an important achievement, as would real discussions about strategic doctrine governing possible nuclear use and escalation.

Thus, implementing the next big idea in arms control—achieving American, Russian and Chinese nuclear limits—will neither be quick nor easy. But that does not suggest that it should not be pursued. The challenge is not with the President’s instincts in this area, but with his approach—one that can be modified to make real progress. But any serious effort along these lines needs to recognize that the first step is the extension of the existing New START treaty. Without this, all the rest probably becomes impossible. The president now has the opportunity not only to rescue nuclear arms control but to transform it. He should seize it.

Richard Burt led the American delegation that negotiated the START agreement signed by President Bush and President Gorbachev in 1991. Jon Wolfsthal served as senior director for arms control and nonproliferation at the National Security Council and helped negotiate the New START agreement. Both are leaders of the Global Zero arms control initiative.