How Trump's National Security Strategy Breaks with the Past 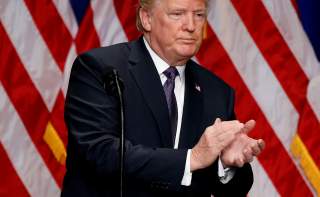 President Trump unveiled a new National Security Strategy on Monday. Previews of the document, based on leaked drafts and backchannel interviews, had given the impression that it would be a bland continuity of previous administrations’ strategies, with a few sops to Trumpism thrown in to satisfy the boss. A careful reading, however, shows it to be the reverse: a radical departure from the past within a penumbra of stability.

Obama’s February 2015 NSS was an idealist wish list, bordering on constructivism. Trump’s is petulance and solipsism masquerading as realism.

Certainly, there is considerable overlap in the documents; all National Security Strategies to date have centered on protecting the physical and economic security of the American people, with the standard homilies on enduring threats and interests. And the current NSS, like other recent iterations, pays due homage to terrorism and cyber threats.

But this version is starkly different, repeatedly sandwiching Trumpian policy in between platitudes about long-standing American values. Of course we’re not racist—but no immigrants. Of course we love our allies—but they’d better stop freeloading. Of course we support free trade—but only if we come out ahead. Of course we continue to support global institutions—but only insofar as we win.

Trump’s cover letter declares, “The American people elected me to make America great again,” and brags, “During my first year in office, you have witnessed my America First foreign policy in action.” After a long litany of complaints about the ways the country had declined under his predecessor, he promises, “we are charting a new and very different course.”

Any previous NSS could have contained the sentence, “Americans have long recognized the benefits of an interconnected world, where information and commerce flow freely.” But it’s hard to imagine one that followed that sentence with, “Engaging with the world, however, does not mean the United States should abandon its rights and duties as a sovereign state or compromise its security.” Or one that then continued, “Openness also imposes costs, since adversaries exploit our free and democratic system to harm the United States.”

It’s only natural that the document would begin with the premise that “the United States is safer when Europe is prosperous and stable, and can help defend our shared interests and ideals” and “the United States remains firmly committed to our European allies and partners.” But, in true Trumpian fashion, that’s caveated: “The United States fulfills our defense responsibilities and expects others to do the same. We expect our European allies to increase defense spending to 2 percent of gross domestic product by 2024, with 20 percent of this spending devoted to increasing military capabilities.” None of that is new as a matter of U.S. policy, but it’s unprecedented for it to be so bluntly stated in our capstone strategic statement.

While no one would have been surprised to see the line, “The United States understands the contributions immigrants have made to our Nation throughout its history” in a previous NSS, it seems a departure from the rhetoric and policies of this president. But that nod to our better angels is quickly followed by the caveat that “illegal immigration, however, burdens the economy, hurts American workers, presents public safety risks, and enriches smugglers and other criminals.”

While averring that “the United States will continue to welcome lawful immigrants who do not pose a security threat and whose entry is consistent with the national interest,” the focus is on “enhancing the screening and vetting of travelers, closing dangerous loopholes, revising outdated laws, and eliminating easily exploited vulnerabilities.” It vows to “reform our current immigration system, which, contrary to our national interest and national security, allows for randomized entry and extended-family chain migration.”

Along those lines, the standard declaration that “the United States rejects bigotry and oppression and seeks a future built on our values as one American people” is used to set up the not-so-subtle anti-Islamist line, “We will deny violent ideologies the space to take root.”

There’s doubtless continuity in the line, “For 70 years, the United States has embraced a strategy premised on the belief that leadership of a stable international economic system rooted in American principles of reciprocity, free markets, and free trade served our economic and security interests.” Alas, that assertion serves merely to bolster the complaint that “the United States helped expand the liberal economic trading system to countries that did not share our values” and “espouse free trade rhetoric and exploit its benefits, but only adhere selectively to the rules and agreements.”

Likewise, the standard rhetoric, “Working with our allies and partners, the United States led the creation of a group of financial institutions and other economic forums that established equitable rules and built instruments to stabilize the international economy and remove the points of friction that had contributed to two world wars” is followed by the threat, “But the United States will no longer turn a blind eye to violations, cheating, or economic aggression.”

The document explains that “a world that supports American interests and reflects our values makes America more secure and prosperous.” But that’s immediately followed by the declaration, “We will compete and lead in multilateral organizations” (pick one!) “so that American interests and principles are protected.”

Perhaps the biggest departure from the trend of sandwiching Trumpian policy between odes to classic values is the long tribute to America’s diplomatic corps, “our forward-deployed political capability, advancing and defending America’s interests abroad.” It declares that “diplomacy catalyzes the political, economic, and societal connections that create America’s enduring alignments and that build positive networks of relationships with partners,” “sustains dialogue and fosters areas of cooperation with competitors,” and “reduces the risk of costly miscommunication.”

There is no caveat to that homage, save perhaps a backhanded declaration that “we must upgrade our diplomatic capabilities to compete in the current environment and to embrace a competitive mindset.” But none of the listed reforms speak to ridding the State Department of its most experienced personnel, gutting the hiring of topflight young people, or failing to appoint key senior leaders.

That said, the section on diplomacy is buried in a chapter on “Preserving Peace Through Strength,” which, as one might expect, focuses heavily on the military instrument. The actions of the administration thus far, as well as the longstanding predilections of Congress, leave little doubt where the priority of resourcing will be.

Those who voted for Trump, especially those who took him both seriously and literally, should rejoice in this strategy. Those who did not can perhaps take some small comfort in the fact that these documents seldom have much influence on public policy. Regardless, elections have consequences, and this is undoubtedly a very different strategy than we would have seen had Hillary Clinton’s name been on the signature page.