How Turkey's Geopolitical Ambitions Could Change the Middle East 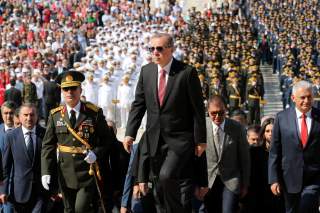 On December 26, 2017, Turkey expanded its military presence in Qatar by deploying hundreds of Joint Force Command troops to its military installation in Doha. This troop deployment gained significant media attention, as it came just one day after the release of a report revealing that the Turkish military intervened on Qatar’s behalf to prevent Saudi Arabia and the United Arab Emirates (UAE) from launching a coup against Qatar’s Emir Tamim bin Hamad Al Thani in June.

The Turkish government’s decision to flex its military muscles on Qatar’s behalf underscores a major shift in Ankara’s Middle East strategy. Since the July 2016 coup d’etat attempt, Turkey has transformed itself from being a destabilizing revolutionary actor to the Middle East’s strongest supporter of state stability. In recent months, Turkey has underscored its commitment to preserving state stability in the Arab world, by supporting the reunification of Syria under a strong central government and vociferously backing Libya’s UN-recognized Government of National Accord (GNA).

Turkey’s adoption of a pro-stability agenda in the Arab world can be explained by Ankara’s heightened concerns about internal unrest after Erdogan’s authority was challenged by the July 2016 coup attempt. As Turkish president Recep Tayyip Erdogan believed the coup attempt was orchestrated by rogue military units inspired by Islamist cleric Fethullah Gulen and facilitated by external forces, Turkey has sought to undercut nationalist insurgency movements and counter destabilizing foreign involvement in regional conflicts. This strategy aims to prevent Turkish-style coup attempts from occurring in other parts of the Middle East, and recreate the network of stable nation-states that preserved collective security in the Arab world prior to the 2003 Iraq War.

In order to consolidate its position as the Middle East’s leading guarantor of collective security, Turkey has refined its approach to inter-state diplomacy and showcased its formidable coercive capacity to the international community. In contrast to the unwieldy balancing act that upheld Erdogan’s pre-Arab Spring “zero problems with neighbours” approach, Turkey’s current stabilization role is upheld by selective tactical partnerships with regional actors possessing similar geopolitical objectives. These partnerships have expanded Turkey’s network of allies in the Arab world and ameliorated the reputational damage caused by Erdogan’s incoherent responses to the Arab Spring.

The deterrent effect provided by Turkey’s formidable military resources, which include the second largest standing army in NATO, has also strengthened Ankara’s ability to act as a regional stabilizer. Countries seeking to counter Turkish objectives have often been forced to shelve their plans as they fear an aggressive retaliation from Turkey which could be detrimental to their security and regional power projection ambitions.

Turkey’s commitment to strengthening fragile states in the Arab world is exemplified by its expanded diplomatic and military involvement in Syria. Even though Turkey provided vital material support for Sunni rebel groups seeking to overthrow Syrian President Bashar al-Assad in the first years of the conflict, and continues to view Assad as an illegitimate leader, Ankara’s current policy preference is for the reunification of Syria as a stable centralized state.

Although Erdogan recently described Assad as a “terrorist” who has no place at the bargaining table, Turkey’s unofficial Syria strategy views the political ambitions of Kurdish nationalist groups, like the Syrian Democratic Forces (SDF) and Democratic Union Party (PYD) as the biggest impediments to stability in Syria. The Turkish government believes the formal establishment of two centers of power in Syria, one in Damascus led by Assad and one in Rojava led by Kurdish nationalist factions, could trigger a wave of partitions that undercut the territorial integrity of Middle East states, and destabilize eastern Turkey by empowering the Kurdistan Workers Party (PKK).

In Turkey’s view, the preservation of a unitary state in Syria will avoid these pitfalls and facilitate the re-establishment of a politically stable Syrian nation-state. A unitary state structure would have a legal framework that ensures an eventual regime change in Syria produces an opposition government that exercises political power over the entire country. This outcome would be highly beneficial for Turkey’s geopolitical interests, as it would allow Syria to potentially become a Turkish ally if Assad were to fall from power.

To ensure a peace settlement that preserves Syria’s unitary state structure, Turkey has forged partnerships with regional stakeholders aimed at restricting the political influence of Kurdish nationalist groups. These efforts have also resulted in Turkey improving its relations with Iran and Russia. Turkey has signed landmark deals with Iran on border security, counterterrorism and intelligence sharing, which ensure that both countries can coordinate military efforts against Kurdish militant groups. The Turkish military has also collaborated with Russia by launching joint airstrikes in Sunni opposition strongholds of northern Syria. This cooperation has not yet caused Russia to abandon its support for a federal state in Syria, but has contributed to the weakening of Moscow’s links with the SDF and Russia’s willingness to facilitate Turkish military operations in the Kurdish city of Afrin.

The coercive dimension of Turkey’s stabilization role has also been on display in Syria as Ankara demonstrated its willingness to militarily intervene in the Syrian conflict during the August 2016–March 2017 Operation Euphrates Shield anti-ISIS campaign. President Donald Trump’s November statement calling for the end of Washington’s military assistance to the PYD can be regarded as a means of appeasing Turkey and preventing Ankara from launching an impulsive military campaign against the pro-U.S. SDF. This policy shift suggests that Erdogan has successfully converted his unpredictability from a major liability to a source of leverage and fostered respect for Turkey’s military capabilities in both the West and the Arab world.

Turkey’s support for the GNA in Libya mirrors its actions in Syria. Since Turkey announced its decision to reestablish diplomatic relations with Libya in June 2016, the Turkish government has worked assiduously to unite Libya under the leadership of the Tripoli-based GNA government and undermine the power of militia groups in eastern Libya. Turkey has also stridently opposed interventions by regional powers, like Egypt and the United Arab Emirates (UAE), who support the federalization of Libya and seek to strengthen the influence of Tobruk-based military chief Khalifa Haftar.

Much like in Syria, Turkey has used its efforts to strengthen state institutions in Libya to expand and deepen its network of allies within the Arab League. Turkey’s principal ally in this endeavor is Qatar. The Turkish government’s expression of solidarity with Doha in the Gulf crisis aims to demonstrate that the Turkey-Qatar alliance against the UAE can extend beyond the GCC context. Turkey has also courted Sudan, as Khartoum shares Ankara’s concerns about the destabilizing impact of the Libyan military’s illegal arms sales.

The coercive dimension of Turkey’s campaign to support Libyan sovereignty is weaker than in Syria, as Turkey’s willingness to use military power on Tripoli’s behalf remains unclear. Haftar’s forces have historically viewed the risk of a Turkish military intervention in Libya as negligible, and this opinion was strengthened further by Turkey’s muted reaction to the Libyan military’s May 2015 shelling of a Turkish ship bound for Tobruk.

Despite this precedent, Haftar has become more cautious about provoking Turkey in recent months, as Ankara has deployed military resources to African countries, like Somalia and Sudan, and escalated tensions with Egypt over President Abdel Fattah el-Sisi’s endorsement of the 2016 Turkish coup attempt. This ensures that Turkey is able to protect Libya’s sovereignty with little risk of military backlash. Therefore, international supporters of Haftar, like Russia have expanded their diplomatic engagement with Tripoli in part to avoid antagonizing Turkey.

Even though Erdogan’s unpredictable conduct has been regarded as a source of instability in the Middle East, Turkey’s postcoup foreign policy towards its neighbors has focused chiefly on protecting state sovereignty in the Arab world and reviving the pre-2003 stable unitary state system. If Turkey succeeds in protecting the sovereignty of Syria, Libya and Qatar, then its status as a guarantor of collective security in the Middle East will increase substantially, strengthening Ankara’s range of diplomatic allies and Erdogan’s prestige as a global statesman.

Samuel Ramani is a DPhil candidate in International Relations at St. Antony’s College, University of Oxford. He is also a journalist who contributes regularly to the Washington Post and The Diplomat. He can be followed on Twitter at @samramani2 and on Facebook at Samuel Ramani.