How the Ukraine Crisis Can Be Solved 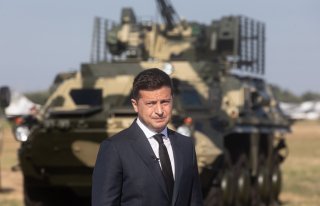 To end the war in Ukraine in the near future, Washington will have to negotiate directly with Moscow. The sooner it does so, the better. And if the Biden administration is unwilling to take this step, perhaps Republicans can finally field a foreign policy that is differentiated from that of the Democrats.

The Biden administration believes that Ukraine has been a good issue for it, helping to obscure U.S. humiliation in Afghanistan and other disappointments around the world. However, this conflict remains, to borrow a quote from General Omar Bradley, “The wrong war, at the wrong place, at the wrong time, and with the wrong enemy.”

America is in a critical contest with China, which seeks to reign supreme in a world that would be compelled to follow its model of high-tech tyranny. The Ukraine War has demonstrated the limits of Russia’s conventional military power and proven again that many European governments will never adequately fund their own defense if they expect America to step in with arms and borrowed money.

Ukraine is not willing to negotiate seriously on its own. Even though its president told a joint session of Congress that Ukraine is willing to negotiate, and Moscow is not, reality is more complicated. Neither side appears ready to make territorial concessions, without which a negotiated settlement seems unlikely. While Ukraine’s position is based on a strong moral case, Kyiv has little ability to continue fighting a large-scale war—much less reconquer lost territory—without substantial and continuing U.S. assistance, including American weapons, ammunition, intelligence, operational advice, and money.

Zelenskyy wasn’t the first foreign wartime leader entirely dependent on U.S. support to address Congress. Iraqi leader Nouri al-Maliki did so in 2006. Afghan Prime Minister Hamid Karzai did so in 2004. Both faced de facto or de jure regime change—Iraq to Iranian dominance and Afghanistan to the Taliban—after the American public and eventually the Congress tired of open-ended, unsuccessful commitments.

The biggest victim of the curse was South Vietnamese President Ngo Dinh Diem, who addressed an admiring Congress in 1957 during the Eisenhower administration. The next occupant of the White House, John F. Kennedy, nodded at a coup d’etat that incidentally ended with Diem’s murder. The U.S. military commitment to the difficult cause tragically lasted a bloody decade-and-a-half more, but still eventually flagged.

America’s necessary exit from Vietnam is worth considering in setting U.S. policy in Ukraine. By the time Secretary of State Henry Kissinger began what would eventually result in the Paris Accords and U.S. withdrawal, it was becoming clear that Saigon was unwilling to negotiate with Hanoi on terms it could accept, insisting on unrealistic concessions it had failed to win on the battlefield. Kissinger conducted what was essentially a bilateral negotiation with Hanoi while dragging along the South Vietnamese government. This wasn’t pretty—ending wars often isn’t—but the step was essential given public opposition to continuing the war and a realization by President Richard Nixon and Kissinger that war was distracting the United States from other and more important fields of contest with the Soviet Union. Today, Washington will have to proceed in a similar manner with the government of Ukraine.

Why? Russian president Vladimir Putin and his government seem willing to fight in Ukraine for the long term. Russia has demonstrated it is comfortable with “frozen conflicts.” Rumors that Putin is in ill health or about to be deposed have been repeatedly proven wrong over the past year. The Russian economy is muddling along just fine, with one of the most skillful central bankers, Elvira Nabiullina, at its helm. Moscow has strong incentives to continue the war another year into next winter, when Europe may face an even greater energy crisis than it does today. Putin hopes that high energy prices and blackouts will splinter Europe’s generally unified position in support of Ukraine.

In contrast, the United States has four reasons to seek a deal now:

First, Washington should be focused on deterring China and currently cannot do this sufficiently. For example, weapons that Taiwan purchased have been diverted to Ukraine. The $100 billion that Washington has offered Ukraine could have gone a long way in the Pacific.

Second, without a resolution of some sort, this conflict could keep Washington from reorienting toward China for a long time, leaving the United States and its allies with shrinking naval and aviation assets in the Pacific and a military too focused on fighting in Middle East backwaters like Syria and European settings like Ukraine. Not much of this expertise is relevant to deterring an intense naval, airborne, and space-based fight with a peer competitor like China.

Third, when the American people and the Congress get tired of this latest commitment, the Biden administration or its successor will cut off Ukraine, and Kyiv could lose much more to Russia than it would if negotiations started now.

Fourth, such an outcome, which would resemble failures in Vietnam, Iraq, and Afghanistan, would be far more damaging to U.S. credibility than a well-negotiated deal.

Can the Biden administration undertake direct negotiations? Some murmurs from National Security Council staffers signaling a desire for Kyiv to negotiate with Moscow could be a start. But the administration has taken few steps to attempt much diplomacy with Russia. There are fewer relationships between the two sides now than during any time since the Kennedy administration.

If Biden officials won’t take the lead, congressional Republicans and presidential candidates could call for peace and for putting our own national interests first, refocusing the military on the neglected mission of deterring China in the Pacific and cutting energy prices, which, like it or not, will require more Russian oil and gas on the international market.

Or Republicans could inexplicably keep the same de facto “Europe first” foreign policy of the Democrats and media and see how voters with a perfect history of tiring of fighting other people’s wars respond.

Christian Whiton is a senior fellow at the Center for the National Interest. He was a State Department senior advisor during the George W. Bush and Trump administrations.