How the United States Can Get Taiwan Right 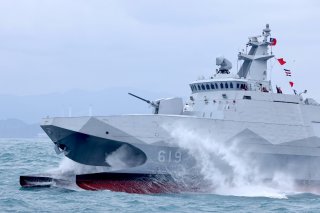 The United States should not trade Los Angeles for Taipei. This states the problem of defending Taiwan bluntly, but it is fundamentally the proposition that American policymakers should consider when determining whether the United States should enter a war with China over the island. A Sino-American war in the Taiwan Strait is ripe for miscalculation and nuclear escalation. Therefore, the United States should seek every possible policy option short of going to war and offer Taiwan incentives to develop an indigenous, asymmetric defense, in a manner that is consistent with the Taiwan Relations Act.

There is a glaring asymmetry of interests between the United States and China in a war over Taiwan. For China, the issue of Taiwan is an internal political matter, central to the legitimacy of the Chinese Communist Party (CCP). Taiwan is a symbol of an unfinished civil war, the last remaining renegade province whose style of government is a direct rebuke to Beijing. Although the United States has maintained significant unofficial ties with Taipei since 1979, it is difficult to argue that the island represents a vital interest to the United States, much less an existential one. A successful Chinese invasion of Taiwan would not threaten the survival of the United States, its territorial integrity, or its political system. Washington cannot credibly claim a greater interest in Taiwan than Beijing.

Beijing would initiate a war with full knowledge of the stakes involved and an understanding that failure could lead to the end of the rule of the CCP. China would be compelled to escalate the conflict if an initial invasion stalled, judging that the United States would not sacrifice its safety for a remote island nation. Can Washington confidently assert that it would be willing to enter a war that would require strikes on Chinese territory to suppress its missile forces and risk targeting commingled nuclear capabilities?

Despite the dramatic threat of escalation, American legislators and commentators continue to call for hawkish policies to defend Taipei. U.S. senators have introduced legislation to pre-authorize U.S. force against a Chinese invasion, circumventing an already flawed process for declaring war. Others have called to end the historic policy of strategic ambiguity, seeking an ironclad commitment to defend Taiwan. Some go as far as suggesting that the United States should deploy tactical nuclear weapons in theater to deter a Chinese assault.

These proposals not only lack strategic sense but also contradict the wishes of an ambivalent American public. Americans support defending Taiwan in the abstract, but polls that outline the costs for participants reveal that the American people express a reluctance to sacrifice in a war over Taiwan. This ambivalence would be disastrous in a protracted war that could incur casualties far beyond what Americans have been willing to tolerate.

The Global War on Terror launched campaigns that were relatively “low cost” compared to what a war in the strait could look like. The United States might lose a vast number of ships and hundreds of servicemembers may perish in the opening weeks of a conflict. This in turn would make the war rapidly unpopular. The American people are accustomed to seeing quick victories over inferior armies or long campaigns against irregular forces. It is difficult to predict whether they would have sufficient resolve to support a long and costly war against a near-peer adversary.

The United States should not abandon Taiwan, but it must encourage Taiwanese leaders to take more responsibility for the island’s defense. In fact, the prospect of U.S. involvement has led to years of freeriding by Taipei. For a country facing an existential external threat, Taiwan’s armed forces are consistently undermanned and plagued with a reserve force that is poorly trained and ill-equipped for a war.

The United States should incentivize Taiwan’s shift to an asymmetric defense through conditional aid. Rather than selling exquisite and vulnerable weapons platforms, the United States should offer cheaper and more effective anti-ship missiles, mines, and lethal drones that would ensure that air and naval superiority remains contested throughout a war with China. If Taipei demonstrated that it is willing to continue its strategic transition, the United States would regularly bolster its stocks of munitions and asymmetric weapons platforms.

A “porcupine” strategy that prolonged a Chinese invasion or thwarted a fait accompli would give the United States time to marshal support among its allies and conduct a coordinated sanctions campaign. Before the outset of a conflict, the United States could airlift humanitarian and defensive supplies, giving Taiwan the ability to sustain itself during a siege. This strategy may not benefit from the public appeal of more visible weapons systems or troop deployments, but it is the best way to assist Taiwan in the immediate future.

It is not my intention to devalue Taiwan’s strategic significance, nor understate the brutal impact that a Chinese invasion would have on Taiwanese citizens. But it is crucial not to exaggerate the importance of Taiwan nor treat it as a symbol of lofty ideals.

Designating Taiwan as a bastion of freedom that should be defended at all costs, or the linchpin of the liberal international order, is a dangerous rhetorical play. Emotional appeals obscure sober judgments of strategy. From a historical perspective, it is difficult to argue that U.S. interests in Taiwan originate from a desire to defend democracy. Did Taiwan’s status as a symbol of a liberal world order begin during the martial rule of Chiang Kai-shek? Or did it begin only after Taiwan transitioned to a multi-party democracy?

Rather it is clear that hawkish strategies to defend Taiwan stem from the impulse of U.S. policymakers and commentators to constrain China’s growing power. Taiwan is the key regional flashpoint and is given outsize importance. The loss of an “unsinkable aircraft carrier” could upend the U.S. defense perimeter and cast doubt on other commitments the United States has made in the region. But it is even more likely that an American defeat against China would strike a greater blow to alliance credibility.

Taiwan has transformed itself into a free and open society. The subjugation of Taipei would be a catastrophe for the international community and a tragic result for the millions of Taiwanese who seek to live in peace and autonomy. But the question of whether to commit to defending Taiwan to the brink of nuclear escalation should be made on its own terms, rather than subsumed into a project to protect hegemony or bolster democracy. The United States has an interest in assisting a small democracy in its own defense, but it cannot commit to becoming a combatant in a war with existential stakes. However uncomfortable this reality may be, American policy is best suited to acknowledging it.