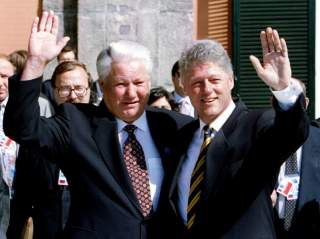 Russian-U.S. relations are now at their lowest point since the collapse of the Soviet Union. According to the ruling elite in Washington, the authoritarian and corrupt regime in Moscow pursues expansionist policies, supports anti-U.S. forces around the world, and works to undermine the so-called “liberal world order” that the United States has been trying to build for the last several decades. For their part, rulers in Moscow view Washington’s position as Russophobic and feel that the United States has cast Russia in the role of a McCarthyesque bogeyman, a scapegoat of sorts that is to blame for all of its problems. Moscow considers U.S. foreign policy to be senseless, if not plain stupid, and as undermining global stability as well as Russia’s own political system. Leaders in both Moscow and Washington believe that, under these circumstances, there is no reason to talk with the other country about seriously improving relations—and no one to discuss the subject with anyway.

This state of affairs leaves little hope for improved relations or for Russia to return to a pro-Western stance. But there is another question: Who is to blame for the fact that Russia gradually shifted its pro-U.S. position of the early 1990s to an anti-U.S. policy later? If Boris Yeltsin considered the United States a natural friend and ally in the early years, why did his successor, Vladimir Putin, come to view it as a dangerous opponent?

The key here is the period when bilateral relations were first developing. In a recent article in Politico Magazine, Strobe Talbott, who developed Washington’s Russia policy of the time while serving as Deputy Secretary of State under Bill Clinton, compares the Russia policies of the Clinton and Trump administrations. Talbott argues that Clinton actively assisted Yeltsin, who was moving Russia in what the U.S. president considered a proper “democratic” and pro-U.S. direction, while Trump is allegedly helping Russia pursue an anti-democratic and anti-U.S. policy. For this reason, Trump’s policy runs counter to U.S. interests and constitutes collusion with the enemy.

What is interesting here is the admission that Washington helped Yeltsin, a fact that is undeniable now that the transcripts of talks between Clinton and Yeltsin have been published. Obviously, that assistance amounted to direct interference in Russia’s domestic policy. Yeltsin asked Clinton to persuade the International Monetary Fund to grant Russia $10 billion in loans prior to the presidential elections in 1996 so that Yeltsin could improve his ratings by paying overdue salaries and pensions. Clinton complied, knowing full well that by supporting Yeltsin against his main opponent—the Communist Party candidate—he was interfering in Russia’s internal political struggle. Clinton, however, warned the Russian president: “We are clear about what it is we support,” referring to the course he expected Yeltsin to pursue after his election win.

However, Talbott and his like-minded associates do not consider this collusion because it benefited the United States. Those who hold such views, however, should recall that this was not all Clinton did. He also approved NATO’s eastward expansion over Yeltsin’s objections. Of course, Yeltsin was unable to insist on this point while at the same time requesting money from the West. It is worth noting, however, that Yeltsin’s position on NATO differed little from Putin’s position today. The difference is that Putin managed to restore Russia’s financial independence, making it less dependent on the United States and better able to respond decisively. Clinton felt he could safely ignore Russia’s security concerns. This was the case when he ordered the bombing of Yugoslavia over Yeltsin’s strong objections, even prompting the Russian leader to warn: “Our people will certainly from now have a bad attitude with regard to America and with NATO.”

According to Talbott, the United States was willing to cooperate only on “what we deem to be [Russia’s] legitimate security concerns” and not on everything Moscow claimed was important. In other words, the Clinton administration felt that Washington, not Moscow, should decide what constituted Russia’s legitimate interests. Is it any wonder, then, that Moscow was dissatisfied with this approach?  From the time of Gorbachev’s rule, Moscow’s leadership had wanted to become a part of the West. But it wanted to do so on equal footing with the West, and with the freedom to determine its own policy and to have a say in how the whole “civilized world” would develop.

Clinton chose Yeltsin to pursue Russia’s interests—as determined by Washington—disregarding not only Yeltsin’s foreign policy objections, but also his corrupt and ineffective government, as well as his extremely unpopular economic policy. It is worth recalling here that the privatization program—that led to an enormous economic downturn in the GDP, a significant decline in the overall standard of living and to what leading U.S. expert on the Russian economy James Millar in 1996 called “a de facto fraud”—was carried out with the help of money from the U.S. government and international financial organizations under Washington’s control. The Russian Privatization Center headed by close Yeltsin associate Anatoly Chubais’ team, was funded by USAID, IBRD as well as the European Union and its individual members. Part of the funds reportedly funneled into Yeltsin’s election campaign. The entire story is described in the academic literature, and particularly in the book by Janine Wedel characteristically titled Collision and Collusion: A Strange Case of Western Aid to Eastern Europe.

Of course, Western money did not go directly into Yeltsin’s campaign. The scheme was not so primitive and retained an outward semblance of legality: the West provided money for privatization and those overseeing the process organized auctions at which major Russian business leaders acquired state-owned enterprises that often sold for a song. According to this scheme, the major business people supported Chubais as their front man, channeled their money through him and made him so indispensable to Yeltsin that the newly elected president appointed Chubais deputy prime minister and granted him unusually broad powers. Although they ostensibly did nothing illegal, Western donors essentially found a way to funnel material support to Chubais and his backers and to promote Yeltsin’s candidacy, thereby circumventing the Russian Constitution and election law. This was a very real collusion with the Russian regime, as compared to the alleged collusion of Trump’s campaign.

Clinton also supported the obviously fixed results of the 1996 presidential election and turned a blind eye when Chubais and his team used hundreds of thousands of dollars in cash that he and his staff obtained from questionable sources to run Yeltsin’s campaign.

Thus, although in word the Clinton administration supported democracy in Russia, the creation of a market economy, and its transition from an imperialist to a liberal foreign policy, in practice Washington helped create an ineffective, corrupt, anti-democratic regime whose primary purpose was seen as furthering U.S. interests. This only made the Russian people even unhappier with the Moscow regime and with the West. Riding the wave of that discontent, an even more authoritarian leadership came to power, but one that promised to satisfy the new demands of the Russian public. It has done this remarkably well, as seen by President Putin’s long-standing high ratings.

Yeltsin probably chose Putin as his successor because he saw him as a strong organizer and politician who could better promote and defend Russia’s national interests than he had been able to do. The proof is Yeltsin’s meeting with Clinton in 1999 at which he presented Putin as the person who was certain to win the election and become the next president. Clinton was entirely unfazed by Yeltsin’s confidence that Putin, a complete unknown, would win election—an assertion that clearly implied all Russian state structures were complicit in the plan. On the contrary, Clinton essentially approved of Putin’s candidacy, calling him a “very smart” person.

Although Putin turned out to be less of a democratic leader than Yeltsin had presented him as to Clinton, it was not Putin’s ascension to power that caused the subsequent changes in domestic and foreign policy or that prompted Russia to curtail numerous freedoms and to pursue its interests abroad more aggressively. Just the opposite: Putin’s rise to power was the result of Yeltsin’s bankrupt policies and the widespread dissatisfaction with the direction in which he was leading the country—a course that the Clinton administration’s policies had greatly facilitated. Many Russians who advocated democratic reforms in the early 1990s and for whom both the Yeltsin kleptocracy and the Communist dictatorship were anathema now have reason to blame Talbott and his like-minded associates for contributing to authoritarianism in Russia. Those policies served to discredit Russia’s pro-Western forces completely because everything was lumped together in the public’s perception—kleptocracy, corruption, Western aid, pro-Western policies, and Russia’s abasement. And it was the policies developed by Talbott and his associates that gave rise to this perception.

Actually, Putin was not initially opposed to the West. Not only did he make several significant concessions to the United States shortly after coming to power, but he was also the first world leader to call President George W. Bush after the terrorist attack in New York. He clearly hoped to establish equal relations with Washington. This contrasted with Yeltsin who, by the end of his term, had grown very unhappy with the United States. It was he, and not Putin, who during a visit to China in December 1999 said: “Clinton apparently forgot for a few seconds what Russia is. Russia has a full arsenal of nuclear weapons, but Clinton decided to flex his muscles. I want to tell Clinton: he should not forget what sort of world he is living in. There was no way and there is no way that he can dictate to people how they should live, pass their free time . . . . We will dictate, and not he.”