How the U.S. Government Hides Foreign Interventions from the Public 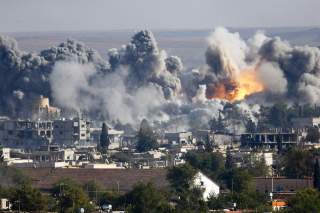 One of the points that the study group convened by the Carnegie Council for Ethics in International Affairs to examine domestic political support for U.S. global engagement has grappled with is the relationship between the national security expert community and the general public. That such a gap exists is uncontested, and, as Kori Schake observed back in June 2018, one reality is that there has been a “genuine failure on the part of experts to think in a careful way about the consequences on the American heartland” of different policy proposals—which leads to widening rather than narrowing that chasm.

One way to address that problem is, as so many task forces have recommended, for experts to go out even more among the general population and to raise awareness of the issues at hand. But what is so fascinating about the debate and discussion ever since President Donald Trump indicated that the United States will be disengaging from Syria, at least in terms of an on-the-ground military presence, is how reactions point to another political strategy, the “keeping it off the radar” approach. This second approach, particularly with regards to Syria, came about precisely because experts, in making recommendations about what the U.S. ought to have been doing in Syria, were well aware that there would be little to no public buy-in for another large-scale military deployment to the Middle East.

The U.S. problem in Syria, for the last seven years, is the comparative lack of “skin in the game” which allows it to be a credible player in determining the fate of Syria, certainly in comparison not only to Iran and Russia, but also Turkey, Israel, Qatar and Saudi Arabia. For experts, an American on the ground presence makes sense if the United States is to be a player. The threat posed by the Islamic State provided some basis for rallying popular support, but for most Americans, losing blood and treasure in Syria for the United States to have “credibility” is not a convincing approach. So how to get U.S. skin in place, but without creating political problems at home?

I have written in the past about the “low cost/no casualty” paradigm which drives much of U.S. engagement these days; the political compact that allows an administration (of either party) the ability to intervene around the world so long as costs and commitments do not rise to become doorstep/pocketbook issues for average Americans—and stories about the U.S. role do not gain too much traction. One of the most critical issues here is how to manage the requirements of an American presence with the political red lines of “boots on the ground.”

What we have seen in Syria and other places in recent years is the emergence of what my colleagues and I, half-jokingly, refer to as “slippers on the ground.” A “slippers on the ground” approach mixes and matches a number of different options from the menu, including a reliance on unmanned systems, the hiring of contractors, fiddling with designations (for instance, that U.S. military personnel are trainers, or are being rotated in but are, for billeting purposes, still considered to be deployed at a station somewhere else), and relying on Special Forces or intelligence personnel with the additional imperative of finding capable local proxies who can provide manpower in sufficient numbers. All of this is designed to keep the number of “regular” military troops considered to be deployed in the field at the lowest possible number. For whatever reason, there are certain psychological factors at play that, just as with price points (why we market something as $9.99 instead of $10 because it seems “cheaper”), troop levels can raise or lower levels of anxiety. Seventy-five advisors or trainers don’t seem very large; several hundred seems manageable, but once we trip over into four figures, concerns begin to rise. This helps to explain the effort, for several years, to keep the announced number of U.S. forces in Syria pegged at 500, even when—using some of the menu options described above, there were, in fact, more than 2000 U.S. personnel present at any given time.

Congress tends to like a “slippers on the ground” approach which also avoids triggering red lines where the legislature must act, starting with the War Powers Act. Small numbers of forces not formally engaged in combat as their primary duty (but acting as trainers or support forces) allows Congress to avoid having to take a stance which might prove politically perilous (supporting authorization for military action which, as Hillary Clinton discovered in 2008, might exact a political cost, or failing to act which then leads to a disaster down the road). As we saw in the Mali incident in 2017, Congress would prefer not to have to supervise the “war on terror” but also, when there are casualties, will be quick to assign blame to the executive branch.

“Slippers on the ground” has been a satisfying approach that the U.S. political system has embraced because it balances between continued deep public skepticism about the utility and benefits of U.S. intervention with giving the administration some tools for forward engagement and operations. President Trump’s decision to order a withdrawal of U.S. forces from Syria is casting attention on this practice. Whether it leads to any real re-evaluation on the part of U.S. political figures to devote time and effort, particularly as the 2020 campaign begins, to making new arguments to the public to endorse their preferred vision for how to use U.S. power in the world remains to be seen.