How USAID’s Growing Relevance Could Destroy It 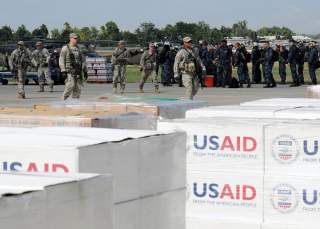 Three months ago, a team of specialists from the U.S. Agency for International Development (USAID) completed an assessment of conflict dynamics in Nigeria. It reported that the extremist group Boko Haram posed a “significant threat” to the country’s stability, but argued the group was symptomatic of the deeper challenges bedeviling Nigeria. It recommended that USAID continue to concentrate its programs on the “structural problems that have led to Boko Haram's rise.” Nonetheless, with President Obama having vowed American action on this high-profile issue, USAID soon introduced three new programs designed around the group.

The creation of those programs illustrated the active role USAID has increasingly come to play in Washington’s response to crises and challenges abroad. Despite the president’s directive that it strive to become the “world’s premier development agency,” USAID is now also asked to work on much more immediate strategic priorities—from Yemen, where it rebuilt schools in a province liberated from Al Qaeda, to Central America, where it was asked earlier this year to address the influx of unaccompanied minors. It’s an implicit expansion of a mission whose significance has gone acknowledged—but which risks producing disappointing results in the near term while undercutting the agency’s impact in the long run.

This is not what either the Bush or the Obama administration intended when they elevated the role of long-term development after September 11, arguing that it was as instrumental to advancing American interests as defense and diplomacy. As the 2006 National Security Strategy explained, development is “reducing long-term threats to our national security by helping to build stable, prosperous, and peaceful societies.” USAID was designated the lead government agency in this effort.

But as Washington has sought new ways to address crises and threats abroad without calling upon the military, policy makers have come to view USAID as useful for much more than its long-term developmental impact. The agency often already maintains offices in many of the countries in question and has the administrative systems in place to spend money on the ground. When the interagency scrambles to respond to the crisis of the week, USAID is a tempting option; as an executive-branch agency led by political appointees, it is hardly in a position to demur.

Why is this so problematic? Three reasons. The first is efficacy; USAID is simply not well suited to responding rapidly to newly urgent priorities. It grapples with notoriously rigid administrative systems, has very little flexible contingency funding and lacks any reservoir of quickly deployable staff. These constraints are challenging enough to USAID’s traditional work; they can be prohibitive when it comes to developing the sort of quick-impact, flexible programming appropriate for such evolving crises.

And third is the perpetuation of unrealistic expectations. Acquiescing to these short-term programs implies AID concurrence that these challenges can be meaningfully addressed with a few million dollars and a quick intervention. This is rarely the case; Boko Haram won’t crumble after a couple years of modest USAID programming, just as stability in a Yemeni province can’t be purchased with a few schools. Complex problems like these will be resolved only through a sustained focus over many years on key needs, not by sudden programming shifts inspired by new Washington-driven priorities.

President Obama implicitly understands this; speaking about Boko Haram earlier this year, he emphasized that the ultimate solution would come through long-term development. What his administration needs to do now is ensure that reality matches this rhetoric, and that its designated development agency isn’t further sidetracked by nondevelopment work.

The National Security Strategy currently in development at the White House offers a timely opportunity to implement just such a new approach; it might begin, for instance, by focusing on a small number of specialist offices at USAID and State Department as the sole tools available in these situations. The U.S. government certainly needs civilian tools to advance its short-term interests in these difficult environments, but continuing to retrofit or cannibalize long-term USAID programs imperils both its short- and long-term security strategy.

Nathaniel Myers is a visiting scholar at the Carnegie Endowment for International Peace and an International Affairs Fellow at the Council on Foreign Relations.