How Washington Lost Its Status as an Arab-Israeli Mediator 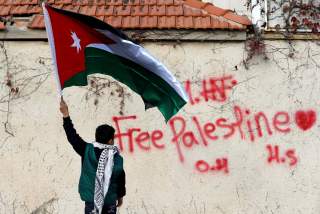 Much has been made of the immediate ramifications of President Trump’s Wednesday announcement recognizing Jerusalem as Israel’s capital and initiating the relocation of the U.S. Embassy: namely, the specter of Palestinian violence in Israel and the occupied territories and implications for a future two-state solution. Yet, perhaps the most underappreciated impact will be on the United States’ standing in the Middle East, and the world more generally. The Trump administration has abdicated Washington’s role as a responsible custodian for Arab-Israeli affairs. The president’s comments go further than any of his predecessors’ to prematurely settle a final-status issue. Right-wing Israeli officials will see a license for freedom of action in all of Greater Jerusalem, and Palestinian leaders will share this appraisal, albeit as pretext to abandon altogether any semblance of a peace process now or in the future. Israel, the Palestinians, and the Arab states will find no suitable replacement to fill the opening. Indeed, the Jewish state and its neighbors are entering a new chapter in their relations, one in which external actor may be largely absent.

Historically, the United States has played an indispensable role mediating the Arab-Israeli conflict. After the Soviet Union severed ties with Israel in 1967, the United States became the only major power that could carry significant influence on both sides. The collapse of the U.S.S.R. and the end of the Cold War firmly established the United States as the main steward of the peace process. Only American diplomatic pull could bring Israelis and Palestinians to the negotiating table. Only American military power could provide a security guarantee for a territorial compromise. More symbolically, but nonetheless important, only the self-perception of Americans as leaders of a unipolar world could justify mobilizing the political will necessary for serious negotiations. Countries like Russia, India and China may have international aspirations, but in practice they reserve their diplomatic energy for more proximate conflicts.

Of course, the Americans have not been alone in pursuing the role of mediator. Other countries have launched initiatives, but these tend only to influence one party to the dispute, typically the Arab/Palestinian constituency. For instance, Saudi Arabia and its Arab Peace Initiative could go a long way in advancing a two-state solution and Israel’s integration into the Middle East. The concession of most Arab League members to recognize Israel in the context of a final-status agreement on the Palestinian question is an achievement in and of itself. Nevertheless, Israelis are hardly a natural audience for Riyadh’s diplomacy, and this fact has borne itself out in Israel’s rather cool reception of the Saudi plan. Other would-be peacemakers, like France, have not generated interest from either side.

The U.S. role in the peace process has never been without its critics. Various Palestinian officials have lambasted American administrations, Democratic and Republican, for allegedly failing to act as an honest broker. This is likely in part to shore up domestic political support from anti-American constituents and partly because some Palestinians leaders genuinely feel aggrieved with Washington. Yet the United States was always been able to at minimum retain the pretense of being an honest broker because it publicly held fast to a core set of final status issues from 1967 on: land-for-peace (later, two states), Jerusalem and Palestinian refugees. While the United States has often faced the epithet of “Israel’s lawyer” at the United Nations, successive presidents have both openly and tacitly supported UN resolutions reinforcing the sanctity of the aforementioned final-status subjects, beginning with Resolution 242, which was passed just weeks after the Six-Day War.

Far from being pure political theater, U.S. adherence to safeguarding final-status topics helps Palestinian and Arab state officials to sell a peace process to those who are less than amenable to compromise with Israel. In a leaked 2009 conversation with American Special Envoy for Middle East Peace George Mitchell, Palestinian Liberation Organization Secretary-General Saeb Erekat claimed, somewhat hyperbolically, that without a clear U.S. stance on two-states, Palestinian “negotiating under continuing settlement and without recognition . . . would be the nail in AM’s [Abu Mazen/Mahmoud Abbas] coffin.” Still, there is some truth to Erekat’s argument. Each failed U.S.-sponsored peace initiative undermines popular Palestinian faith in the PLO as a national institution and the Americans as serious brokers with the Israelis.

The new United States policy on Jerusalem alters this formula as the first time an American administration has explicitly taken an action that can be construed as prejudicing the outcome of a final-status issue. While President Trump made reference to a two-state solution in his Wednesday speech, such passing mention will most certainly be lost on Israelis and Palestinians alike. By declaring Jerusalem Israel’s capital and initiating an embassy move without making a robust distinction between western Jerusalem (inside Israel’s internationally recognized borders) and the contested eastern sections of the Greater Jerusalem municipality, both Palestinian officials and right-wing Israeli officials—with competing motivations—will likely see the United States as endorsing Israeli sovereignty over the Green Line.

If the White House’s recent decision on Jerusalem upends the Trump administration’s pursuit of the “ultimate deal,” will anyone fill the void? The obvious contenders would be a regional player like Saudi Arabia or a country with global ambitions like Russia or China. As has been mentioned, the Saudi-led Arab Peace Initiative is worth little without Israeli interest. Meanwhile, Russia and China have offered their own Middle East peace plans, but these are simply unimaginative regurgitations of previous American-led programs. Russia was already a cosponsor of the Oslo process, but the Kremlin played that role more as a formality than a serious foreign-policy pursuit. To be sure, Russia is eagerly restoring its position in the Middle East, but a two-state solution is not a prerequisite for the Russians’ more pressing concerns in Syria, Egypt and Libya.

Where Beijing and Moscow lack interest in Israeli-Palestinian conflict, the European Union may seriously desire an activist role in midwifing an agreement. However, the more forceful tactics Brussels has applied in the past, such as labeling settlement products, cannot be credibly backed up by economic or military clout in the same way American administrations once fielded sticks and carrots with the Jewish state. The EU has no loan guarantees to walk back on with Israel. It cannot hold a military-aid package over Israel as a bargaining chip. As a supranational body, it doesn't even have a security council veto to influence discourse about Israel at the UN.

The good news is that a future U.S. president seeking to pick up the pieces on Israeli-Palestinian talks will not have to compete with a new mediator to reassert Washington’s previous position. An American administration serious about negotiations could even apply Trump’s policy as negative reinforcement, threatening to dial back the American diplomatic presence in Jerusalem in response to Israeli moves against a two-state outcome. In the interim three-to-seven years, however, there will be no outside mediator to discourage Israelis and Palestinians from engaging an increasing unilateralism. When that happens, both sides will regret abandoning external sponsorship for negotiations, just as U.S. officials may wish to restore the intermediary status that President Trump ceded on Wednesday.

Evan Gottesman is a Communications Associate for the Israel Policy Forum, a New York-based organization promoting a pragmatic two-state solution. He has previously been published in the National Interest, The Diplomat, World Policy Journal and The Jerusalem Post. The views expressed here are his own.