How Will History Judge Trump? 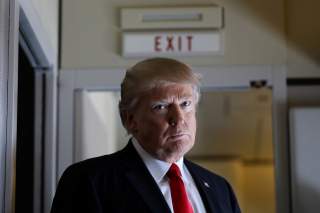 “THERE ARE three times,” wrote Saint Augustine in his Confessions, “a present of things past, a present of things present, and a present of things future.” Each is needed for contextual understanding, but gaps between them are not readily apparent. As History meanders, one moment at a time, reality catches up slowly, one step at a time—“crabwise,” as the postwar German novelist Günter Grass wrote.

The Trump moment grew out of a confluence of circumstances shaped by luck, will, resilience, defiance and skills (not to mention a significant assist from Russia). There was an opportunity in 2016, and Donald J. Trump seized it. The same could be said of the Obama moment eight years earlier, although it responded to a mix that was clearly different and produced a more convincing outcome. Only eight days after his inauguration, Trump faced majority disapproval in Gallup public-opinion polls: George W. Bush and Barack Obama took 1,205 and 936 days to reach the same point. History’s final verdict on both former presidents is still pending, but what is already said of Trump carries tones of finality: an end, à la Watergate, but on the quick and more grim.

Are we then premature in assessing with such certainty a presidency that is still in its infancy? And what is the effect of this heteroclite moment on the world, at a time of deepening global disorder? Can a nation whose presidential leadership is question at home still offer decisive leadership to other nations?

As the Trump moment unfolds, there is a risk that critical security issues are neglected, distorted or damaged—not only because of what Trump does and says about them, but also because of what his critics say and do about him. Echoes of a recent past: there was too much Vietnam for the postwar generation of the 1960s, which feared more Vietnams too readily; there was too much Nixon in the 1970s for a post-Vietnam generation, which imagined a declining America far too early; there was too much Reagan in the 1980s, for a post–Cold War generation that later embraced assertive preponderance as a shortcut to peace; and so forth, including too much globalization in the 1990s, too much 9/11 in the 2000s and too much Iraq in the 2010s. Now, there is too much Trump. He is the issue, he has become “our” obsession and “we” are his—alleged fake experts, fake reporters, fake voters and fake facts.

But enough: there is much less in Trump than in America, and there is much more to America than Trump. No moment, whatever its frustrations and even its aberrations, should distract from such an elementary truth. Admittedly, time makes it harder to remember the battles against History that ensued when making peace with wartime enemies, rethinking postwar Europe, testing a fragile institutional order on a newly decolonized world, launching a Great Society for an ever more perfect union, defeating evil ideologies—and more. Coming in the wake of half a century of suicidal wars, these were all distinctly American achievements that helped remake half the world for the better, and they were not inevitable until they happened. At last, now that we know, a high passing grade for the U.S. role in the world should come easily—for America to be great was never the issue. I am an American, Casablanca born, and it is in Casablanca the movie that Humphrey Bogart said it best: “Play it again, Sam,” and keep playing it. This is still the best way to bend History to the right side of Humanity.

And yet, having stumbled into a Trump moment aimed at making America great again, what if History now fails to understand which side America is on? What if Americans, who expect History to serve them no less than they service it, object to its direction and insist on a different course? Leadership always matters, whether that of the president at home or that of America abroad. Now, in a moment of transition at home and mutation abroad, it matters more than ever.

THIS IS not the first time a newly elected president has caused anxiety at the start of his mandate. A crisis of apprenticeship is a rite of passage. Like each of his postwar predecessors, Trump is painfully discovering, in his own words, that “decisions are much different when you sit behind the desk in the Oval Office.” Truman, who came to power abruptly after Roosevelt left too suddenly, had a tough start too; so did Eisenhower, who lacked political experience, and Kennedy, a bit too tender, and Johnson, too southern, and Nixon, too deceitful, and Ford, too transient, and Carter, too righteous, and Reagan, too Hollywood. Whatever the case, each president pledged a new beginning but delivered a false start instead, more or less early—like Kennedy in the Bay of Pigs and the Vienna summit, Clinton in Somalia and Bosnia, Bush 43 after 9/11, and Obama over Afghanistan—until they sought a reset of sorts, which often made changes within each presidency more significant than from one president to the next.

After their reelections, Truman and Reagan seized their second chances especially well. The former put in place an institutional order that enabled the latter to conclude the Cold War successfully, with significant contributions from every president who came between them. Since the Cold War, however, expectations of presidential greatness have met with disappointment. Neither Bill Clinton nor George W. Bush or Barack Obama left a legacy that their partisan successors proved willing to pursue, or able to complete. Only Reagan got the “third term” he needed, with Bush 41 in November 1988. In 2016, Hillary Clinton’s electoral defeat was, therefore, Obama’s loss as well, even though it failed to produce a convincing or clean victory for her opponent.

For Trump to recover from his false start as well is, to say the least, unlikely. For Truman and those who followed him, the presidency assumed an alphabet of its own—A for accountability, B for balance, C for convictions, D for discipline, E for experience and so forth. At first, some presidents lacked one or more of these features. But none ever came to office without any, and all eventually acquired much of what they lacked along the way. Just think of the distance from Reagan to Reagan, a presidential icon who initially struggled with the demands of an office for which he at first seemed ill prepared. But Trump is no Reagan, and what made him a surprisingly successful candidate in 2016 is making him a dangerously ineffective president in 2017, with neither “the stability nor some of the competence” required of presidents, concluded Sen. Bob Corker, a Republican, just over two hundred days into a presidency that his party hopes will last eight years. This is not a matter of “letting Reagan be Reagan,” but rather of not letting Trump be Trump.

As the presidential clock keeps moving, Trump is increasingly heard as an alien, dixit Tom Friedman, far from established norms of democratic leadership but dangerously close to crossing the constitutional red lines—and ill suited for the complex alphabet of multilateral governance, the political arithmetic of check and balance, the rigidities of institutional discipline, and the rigors of democratic accountability. Abroad, he is widely viewed as a historical and cultural stranger who complains of the world’s “theft of America’s prosperity” and the “massive sums of money” that must be returned to the United States for services previously rendered. But it is not so easy to rectify the monetary, let alone the geopolitical, balance sheet. And moving more deeply into the twenty-first century, his image of “America First” is that of a geopolitical pagan who resurrects an unsatisfying self-image of the nation as one governed by opportunities and expediencies of all kinds, and guided by “our security interests above all other considerations.”

BUT WAIT: there is the “Scottish verdict” which Dean Acheson used to invoke: “Not proven yet.” Are the objections to the president overstated, coming too late for the 2016 election or too soon after his inauguration? Could we be all wrong—as we were, perhaps, about Iraq and Putin and the Arab Spring and Syria and North Korea and Brexit and all kinds of other things—now about Trump, not so much over who he is and says, but over what he wants and does? There is no greater “fake” than a claim made with too much certainty. What if our reaction is based on preconceived ideas, partisan resentment, intellectual arrogance and misplaced righteousness, enhanced with secondhand bits of information hurriedly assembled?

“The past,” wrote William Faulkner, “is never dead. It’s not even past.” It lingers with whatever is remembered after every mistake has been forgotten, forgiven or not. After Sen. John Kerry became secretary of state, he confessed to having been “ill advised” and even “stupid” on many of his national-security “no” votes, including the development and deployment of new weapons systems in the 1980s and the decision to repel Saddam Hussein from Kuwait in 1991. The torch had been passed, but Kerry clearly did not want to torch the past. Besides, dissent, honorably expressed, is an avenue to power, not a substitute for it. Although Kerry’s confession was to his credit, would he have been the success he became had he spoken or voted otherwise, from Vietnam to Iraq? Bush’s late turnaround after the 2006 midterm elections was born out of the evidence of failure. That is the challenge: when facts change, you’d better change as well. Give Bush credit, therefore, for having done just that: the military surge he dared order then was politically courageous and strategically audacious—and universally criticized.