How to Win in Afghanistan 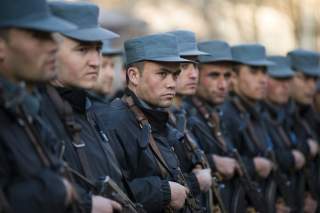 Fifteen years, thousands of lives and tens of billions of dollars later, the United States has failed to meet most of its key objectives in Afghanistan. Mission failed.

Now what? Our current approach, if allowed to continue, guarantees a chaotic future for Afghanistan and an open door for radical Islamists in Central Asia.

Such a state of affairs would herald a major strategic defeat for the United States. Islamists ultimately seek to seize control in both Afghanistan, and Pakistan, and then expand into Central Asia.

A debacle in Afghanistan means we may face another global conflict. Turkey has morphed into an Islamic state, and the Gulf states are financing radical Sunni terror groups meant to encircle and contain the mullahs in Iran—including extremists in Afghanistan.

Will the Islamists achieve their objectives? No, and we do not want to find out. They need to be defeated now, while the situation is still manageable. An alternative strategy can avert a strategic catastrophe later.

Our incompetent efforts at Afghan nation building rest on three shaky pillars that need to be rethought:

• Pashtun control of the overly powerful central government, the national police and the Afghan National Army.

• Excessive deference to Pakistan’s interests and policies in Afghanistan and the region.

This flawed scheme has its roots in the key events of modern Afghan history: the U.S. invasion of Afghanistan (in response to the 9/11 attacks) and the subsequent December 2001 Bonn Agreement to reconstitute the Afghan state structure following the war.

After Karzai’s departure from the political scene in 2014, the United States tried to rectify the most egregious features of his corrupt rule by imposing an unwieldy power-sharing arrangement involving President Ashraf Ghani and Abdullah Abdullah in the newly created position of “national chief executive.” This arrangement has also failed.

It is time to let the Afghan people determine their own future. They should have the freedom to:

• Officially recognize the border with Pakistan.

The United States and other Western powers must begin to take into account the interests of all regional actors in Afghanistan, including India and Central Asian nations.

Afghans should have access to anti-poppy herbicides. The poppy crop, grown mostly in Pashtun areas, is the backbone of the Pakistan-Taliban terror networks and makes systematic corruption a main force in a large sector of the Afghan economy.

The political system we instituted is designed to enable Kabul to control the country, but it is hopelessly counterproductive. It makes Afghanistan uncontrollable and undermines our natural allies inside Afghanistan—those who are fighting radical Islam, namely the Tajik, the Uzbek, and the Hazara communities who represent the majority of Afghanistan’s multi-ethnic population. But we persist in weakening them and kowtowing to the Pashtuns—the group from which the overwhelming majority of Islamic radicals emerge.

To this day, the president of Afghanistan appoints all governors, mayors, police chiefs—and even elementary school teachers! This not only further encourages corruption, but undermines legitimacy. People resent having their mayors, governors and law enforcement officers imposed on them by the central government. Americans would never tolerate such government overreach.

An example of how our failed policy makes matters worse is the recent attempted assassination of Vice President Abdul Rashid Dostum. His followers represent a majority of the people in the provinces of northern Afghanistan.

Recall that after the 2001 attacks on the World Trade Center and the Pentagon, General Dostum led Uzbek, Tajik and Hazara local fighters into battle against the Taliban army. They were able to defeat the Taliban army with the help of U.S. air support and embedded U.S. Special Forces. The battle only cost one U.S. casualty. Dostum led those fighters on horseback against Taliban tanks and gun emplacements. Now, he and his heroic horse soldiers are depicted in an equestrian statue known as the America’s Response Monument. The statue is at Ground Zero in New York City.

Today, the north of Afghanistan—the gateway to Central Asia—has become a target for Taliban and ISIS forces. The Afghan National Army has not been able to defeat them, which has prompted now-Vice President Dostum to go to the front himself to rally support and repel the Taliban incursion.

In October, while traveling in convoy through Faryab Province, Dostum and his entourage were ambushed. More than fifty of his bodyguards were killed and many more were wounded. Dostum barely escaped with his life. This attack deserved the strongest of condemnations. It has been hard to discern any negative response by the Obama administration.

Suggesting something sinister, National Army forces and other government-controlled security units moved away from the vice president hours before the attack. Dostum was left with only his personal security detachment to defend him. The incident exemplifies the indifference the Pashtun government has to defending non-Pashtun areas against Taliban and ISIS attacks. This does not bode well for those struggling to create a decent and stable society.

It is not too late for the United States and its allies to make the needed adjustments. Congress is paying attention. Failure is not—or should not be—an option. The central Kabul government is losing control and the Taliban are gaining ground.

The answer is not more American troops and money, but rather leaders with vision who will change our approach and muster the political will to do what it takes to win. To win, we need different political, military and economic approaches. Washington, DC should exert the moral leadership to make the political changes needed and get out of the way of military leaders and the Afghan people; let them win.

Our military leaders have done their best to build an Afghan fighting force capable of defending the nation, but the essence of the problems afflicting Afghanistan, including its dysfunctional military, are political in nature.

By giving the Afghan communities the autonomy and support they need to defend themselves—including effective close air support, aerial resupply, medical evacuation by air and intelligence-collection capability—those military leaders would be able to turn the tide. The United States and its allies have the ability to make this happen at a reasonable cost.

Absurdly, the current rules of engagement prevent victory. Lawyers seem to be in charge, not battlefield commanders. This over-legalization of warfare is well-intended, presumably to minimize death and injury to noncombatants. Unfortunately, there is no such thing as a “nice” war, especially in that part of the world. We should get over the notion that we can win wars without killing anyone unintentionally. Also, we should constantly remind ourselves of Teddy Roosevelt’s admonition: “Never hit someone softly.”

Afghans like Vice President Dostum, who are willing to risk their lives to defend their communities and families against radical extremists, should not be vilified as part of a narrative that suggests that minority communities in Northern Afghanistan can be deliberately targeted and killed by Islamic extremists. At the same time, Americans cannot target Taliban units in Pashtun areas if a civilian might be unintentionally harmed. This double standard cannot stand.

Finally, we must come to understand that Pakistan is not our friend. We should end economic and military assistance to Islamabad because it is supporting the Taliban, which is killing U.S. allies and U.S. citizens.

The United States should open a dialogue with credible leaders of Pakistan’s Baloch, Sindhi and Pashtun minorities. India is emerging as a global powerhouse. Central Asia is poised to prosper as China, Russia, Japan and India increase trade. The countries of the region share a vital common interest: the defeat of Islamist extremism and terror, and the development of a stable Afghanistan that respects all of its communities.

An Afghanistan at peace and linked to emerging pan-Asian economic structures could finally bring that troubled nation the return to normalcy and prosperity it so richly needs and deserves.

President-elect Donald J. Trump says he intends to rethink and revise many of our failed domestic and foreign policies. He should not neglect Afghanistan. Manageable, intelligent, cost-effective changes to policy now can pay significant strategic dividends in relatively short order.