How to Win Covert Wars 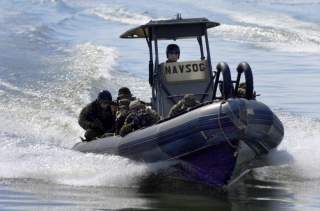 In light of plummeting security around the globe today, the United States would be prudent to take an inventory of its instruments of statecraft. The foundation for effective statecraft and strategy is to have the means to achieve political ends. The potential political ends in this deteriorating world are far outpacing American military capabilities. Our defense budgets, talented military personnel and hardware are suffering from stresses and strains, and are worn out after more than a decade of battles from Afghanistan to Iraq and elsewhere in the world.

To make American ends and means match, we will have to be smarter at using instruments other than military power. These instruments include diplomacy, intelligence and covert action. We often think of drone strikes and direct-action attacks by Special Operations Forces such as Delta and SEAL teams when talking about covert action these days as a legacy of the type of operations we have been conducting against the likes of Al Qaeda and the Taliban. But covert action should be understood in a broader sense of statecraft. It is the support or operations to influence global situations to the advantage of American national interests that require the hiding of the American role to minimize risks and investments, while maximizing the chances for success.

The American covert action to support the Afghanistan mujahedin against Soviet military forces during the Cold War was an exemplar of covert actions. The program inflicted substantial costs on the Soviet Union, forced Moscow to withdraw its forces from Afghanistan and achieved a major American security interest: to prevent Soviet forces from using Afghanistan as a launching point to capture more strategically valuable real estate in the Middle East and the Persian Gulf. The covert-action program, moreover, accomplished all this with minimal risk and costs to the United States. Many commentators, especially those on the political right, stretch the point a bit too far by arguing that the Afghanistan covert-action program “won the Cold War.” They wrongfully dismiss the importance of sustained, decades-long, old-fashioned bipartisan consensus for the importance of politically, economically and militarily containing the Soviet Union to allow its own internal weaknesses to bring it down, just as realist and grand strategist George F. Kennan had argued in the late 1940s.

With the benefit of time, reflection and publicly available information, a look back to assess the Cold War covert-action program in Afghanistan would be a valuable stock taking of the American inventory of statecraft instruments. Bruce Riedel, a senior fellow at the Brookings Institution and an accomplished scholar and practitioner, has done just that in his new book What We Won: America’s Secret War in Afghanistan, 1979-89.

The United States needs allies and security partners in the world, even if they are unsavory players. Riedel’s important book focuses on the United States’ critical relationships with Pakistan and Saudi Arabia in orchestrating the supply of arms and money to the Afghan insurgency via Pakistan. Riedel’s extensive experience as an intelligence officer and senior Department of Defense and National Security Council official gives this book unique insight into the demands and intricacies of policy making.

As a former senior policy maker, Riedel knows well the importance of how individuals with their personalities and egos get along than most academics. His focus on the managing of relations provides readers with insights into the covert war beyond those of former journalist Steve Coll’s best selling book Ghost Wars (2004). Riedel’s book also benefits from his one-on-one interviews with critical players in the covert-action program—to include former Saudi intelligence chief Prince Turki bin Faisal al Saud, former secretary of defense Robert Gates, and former president Jimmy Carter—with whom Riedel has had official dealings in the past.

The covert war was inexpensive for the United States in both blood and treasure. Riedel reflects that no Americans lost their lives, and the total cost of the war for the entire decade was about $3 billion. Such a sum is nothing to laugh at, but it is dwarfed by the trillion-plus dollars the United States has spent in the past decade in Iraq and Afghanistan.

The Soviets pulled off a strategic surprise with their invasion of Afghanistan, much as the Russians last year shocked the West with their unconventional approach to Ukraine. Riedel shows that President Carter was not warned of the impending Soviet invasion in December 1979. The intelligence community reported the steady buildup of Soviet forces along the border, but it misjudged Moscow’s intentions. The intelligence community had done much the same in failing to warn policy makers of the 1973 Egyptian attack against Israel and of the 1990 Iraqi invasion of Kuwait.

The 40th Red Army was the Soviet invasion force that had about 80,000 troops. It eventually grew in its occupation of Afghanistan to about 110,000 troops with three motorized rifle divisions, one airborne division and eight independent brigades. Parenthetically, the Russians in 2014 marshaled comparably sized forces tallying in the tens of thousands along Ukraine’s border, a feat that could not be matched these days by the NATO alliance.

Riedel astutely sizes up the Afghan insurgency and comments that the “mujahedin did not need to be coaxed into an insurgency.” The mujahedin was primarily an army of illiterate peasants with a command structure run by Pakistan’s intelligence service. They ran a classic guerrilla war against the Soviet military primarily trained and equipped to reenact the huge tank battles fought against the Nazis in World War II.

Riedel delves into assessments of two of the most successful mujahedin commanders Ahmad Shah Massoud and Jalaluddin Haqqani and their operations in Panjshir Valley and Khost provinces, names and places that will sound familiar to students and citizens who have come of political age after 9/11. Riedel is especially insightful in examining the importance of Massoud’s study of the Arab-Israeli War in 1967 when he was a teenager. Massoud was assassinated in 2001 by Al Qaeda. Unfortunately, Haqqani remains an instrument of Pakistan’s Directorate for Inter-Services Intelligence (ISI) who has turned on his once-allied American partners.

Riedel pushes against the common American narrative that we won the war, and gives credit to Pakistan’s critical role. He assesses that in many respects, the covert war’s largest player was Pakistan’s General Muhammad Zia ul-Haq. “If any single person was responsible for the defeat of the USSR and the PDPA [People’s Democratic Party of Afghanistan], it was Zia ul-Haq.” On the darker side, Zia spearheaded the effort to Islamize Pakistan’s military, arguably the most functioning institution today in a country beset with instability, violence, a failed economy and educational system, Islamic militants and, above all, nuclear weapons.

Zia turned immediately to Saudi Arabia for help after the Soviet invasion of Afghanistan. The Saudis accepted and funneled aid to the mujahedin via Pakistan’s ISI. The Pakistanis and Saudis later brought the Americans into the covert program. The ISI trained more than 80,000 mujahedin over the course of the war in seven training camps in Pakistan. Zia insisted on full Pakistani control with sole access to the mujahedin. The supply line included about 65,000 tons per year in later stages of the war and included Soviet weapons purchased from Egypt and China. Most of the weapons and supplies were delivered to the port at Karachi, Pakistan. American intelligence on Soviet forces was passed to Pakistan’s ISI to pick targets and plan mujahedin operations in Afghanistan.

Zia in 1986 abandoned caution and plausible deniability over the mujahedin arms supply. He asked Washington for Stinger anti-aircraft missiles, which were easily traced back to the United States. Americans trained the ISI on the Stinger, which, in turn, trained the mujahedin to help down Soviet combat helicopters and deny Russian forces an invaluable battlefield advantage. Riedel remarks that Zia, along with the U.S. ambassador to Pakistan, was killed in an unexplained aircraft crash in 1988, a tragedy that removed one of the Soviet Union’s most ardent enemies from the war.

Riedel is unique in the policy and scholarly worlds, because he is an expert on both the Middle East and South Asia and writes with authority on two regions usually intellectually divided in government and the academy. Riedel ably rejects the common narrative—both in the Middle East and even in the West—that the American covert-action program gave birth to Al Qaeda. “CIA officers in Pakistan had no interaction with the Arab volunteers, just as they had little interaction with the mujahedin themselves. The business of fighting the war was in the hands of ISI, not the CIA.”

What ought to be the lessons from the Cold War covert-action program in Afghanistan? How might these lessons inform and shape our policies and capabilities for dealing with growing international chaos today and in the future? Riedel proposes several lessons or rules of thumb for future policy makers. First, American foreign policy and covert action are most likely to succeed when the intelligence and policy communities are in sync but stay in their “lanes.” Second, management of security partners is more challenging in wartime than in normal times. Third, policy makers need to be clear about the endgame for a covert action, while avoiding the pitfalls of mission creep. Fourth, covert action—as Clausewitz teaches us about all war—always has unintended consequences, so policy makers need to closely watch for “blowback.