How Woodrow Wilson Failed to End the Great War 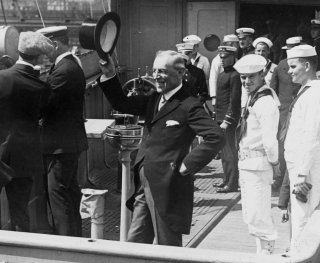 “War,” French politician Georges Clemenceau famously observed, “is too important to be left to the generals.” And as Philip Zelikow’s new book makes clear, peace might be too important to leave to certain politicians—and their friends.

Zelikow, a University of Virginia professor with several tours in the U.S. government, has written an important book, The Road Less Traveled: The Secret Battle to End the Great War, 1916-17. Zelikow argues—convincingly—that there was a missed opportunity to achieve peace in the middle of what would later become known as World War I.

The Great War has long been fodder for historical debates. The German historian Fritz Stern famously labeled the conflict, which erupted in the summer of 1914 and officially ended in November 1918, as “the first calamity of the twentieth century, the calamity from which all other calamities sprang.” Stern was referring to the myriad of catastrophes that the war, at least in part, brought about: the rise of fascism in Europe, Japanese militarism, and the rise of communism—first in Russia, and later beyond.

The war’s import is beyond dispute. It ended empires and dynasties—the Ottoman, Austro-Hungarian, and Romanov, to name but a few. And, in brutal fashion, it ushered in the rise of modern warfare and all of its attendant horrors. The conflict cost the lives of an estimated 20 million—10 million of them combatants.

However, most of the debates have been focused on the war’s beginnings; which nation was most responsible for launching Europe into a morass that would take nearly a century to recover from? Historians have also seen fit to find and affix blame about how the peace was concluded. The shattering of empires necessitated the creation of new nations and new borders, many imperfectly drawn.

But often overlooked was whether a peace could have been made in 1916 and early 1917—before the entry of the United States in April 1917. By joining the Entente alliance, the United States helped seal the fate of the so-called Central Powers: Germany, Austria-Hungary, and the Ottomans. An earlier peace would’ve foreclosed the possibility of the communists seizing power in Russia and could have, the British Foreign Secretary Edward Grey later wrote, “demonstrated the stultification and failure of Prussian militarism.” And, not least of all, it could have saved millions of lives.

As the historian Robert Gerwath has noted, “from 1917 onwards, the Great War changed in nature,” becoming even more brutish and “giving way to an interconnected series of conflicts whose logic and purpose was much more dangerous.” What followed, Zelikow observes, was a model “for the total-war states still to come.”

Zelikow shows that there was an opportunity for peace. Drawing on documents and memoirs, the professor plays the part of a detective, constructing a well-written and well-argued account of a tragically missed opportunity.

In August 1916, he notes, “all the stars finally came into alignment for a real chance to end the war.” While boisterous in public, many key British policymakers were privately pessimistic. The country’s economy teetered close to collapse and the nation was increasingly dependent on American finance and loans to continue their war effort. The French too were open to talks. And key German leaders, foremost among them Chancellor Theobald von Bethmann Hollweg, actively worked to facilitate negotiations.

As important, Bethmann Hollweg, with the approval of Kaiser Wilhelm II, was willing to accept key demands, including the restoration of Belgium, prior to negotiations even beginning.

What was needed was a mediator. As Zelikow highlights, German and British officials were open to the then-neutral United States helping to broker peace. And the American president, Woodrow Wilson, harbored ambitions to oversee an end to the war, hoping to preside over negotiations at the Hague.

As Zelikow correctly observes, “Wilson could have brokered a peace conference conditioned on a plain German commitment to restore Belgium and withdraw from at least most of occupied France.” Indeed, Bethmann Hollweg, aided by Germany’s ambassador to the United States, Johann Heinrich Graf von Bernstorff, was solicitous of the American president, persistently pushing for the United States to step up. And at key moments, leading British policymakers were also hoping for the United States to push for peace.

But it was not to be.

Wilson, Zelikow writes, “failed to make peace not because he was too encumbered by ideals.” Rather, “he failed because he simply did not know how to do it.” The Wilson who emerges in The Road Less Traveled isn’t the starry-eyed academic of caricature. Indeed, Zelikow’s Wilson displays both strategic foresight and an ability to compromise. But unfortunately—both for the war’s participants and the world writ large—he also displayed breathtaking incompetence at key moments.

Wilson’s failure, Zelikow argues, “was the most consequential diplomatic failure in the history of the United States.” The president failed to fully discern and appreciate both Germany and Britain’s willingness to achieve peace. As the German ambassador to the United States pleaded at the time: “Peace is on the floor waiting to be picked up!”

Perhaps Wilson’s greatest mistake was his selection of advisers. Seldom has a president been so poorly served. Wilson’s second secretary of state, Robert Lansing, and his deputy, Frank Polk, were certainly lacking in key capabilities. Neither helped prepare Wilson for the possibility of brokering peace. Neither even so much as looked at a recent model: the Theodore Roosevelt administration’s successful work to end the Russo-Japanese War in 1905. European powers were aware of the precedent, but Wilson and his advisers were oddly uninterested.

But in choosing Edward House to be the key intermediary with the warring nations, Wilson made his most epic blunder.

As Zelikow documents, House consistently misrepresented Wilson’s positions. He actively misled German and British policymakers. House was “a discreet messenger and gifted manipulator” who was “well practiced in the art of vetting and wielding patronage.” But he was manifestly unqualified for the power and responsibilities that Wilson bestowed upon him.

In addition to his incompetence and constant dissembling, House held beliefs that could charitably be called delusional. He was, for example, overtaken with the bizarre notion that Britain could, in concert with the Japanese, invade the United States. Meanwhile, Britain in 1917 faced a financial collapse that only the United States could prevent. Yet, House saw an invasion unfolding if the United States failed to be sufficiently pro-British—a stance which he, for reasons of personal prestige and status, thought the United States must take.

House’s position and power were odd. A wealthy, Texas-born businessman, House did not represent a key constituency. He held no office, elected or otherwise. His entire power was purely the result of Wilson choosing him to be his adviser. This makes Wilson’s decision to empower House all the more damning. Wilson once said: “Mr. House is my second personality. He is my independent self. His thoughts and mine are one.” As Zelikow makes clear, this was less true than Wilson realized. And millions paid for the mistake.