How the Youth Vote Shaped the 2020 Presidential Election 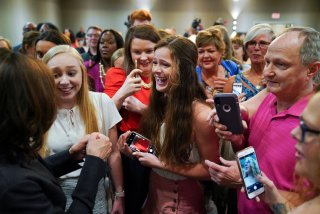 The 2020 election saw record-breaking turnout among voters of all ages, with youth and college voter turnout in several battleground states serving as a potential factor in propelling a Biden victory.

Having a college education has also become “a marker of partisan identification” and “has come to be seen as predictive of voting patterns,” according to The Chronicle of Higher Education.

In an analysis conducted by The Chronicle, counties with colleges in them from five battleground states that landed Biden a spot in the Oval Office in January—Arizona, Georgia, Michigan, Pennsylvania and Wisconsin—helped oust Trump out of the White House.

Out of those five states, 136 counties have four-year public or private nonprofit colleges with at least one hundred students that have in-person classes—when there wasn’t a public health crisis. While Trump rallied support from 64 percent of the counties—a slight decrease from four years ago—the population count in them was much lower than counties that backed Biden. In Biden’s counties, the vote count totaled 12.7 million votes, which is more than double the 5.4 million votes in counties that Trump won.

The Chronicle also pointed to counties that flipped to back the Democratic ticket in the 2020 election compared to four years earlier, including two of them in Pennsylvania: Northampton, home to Lehigh University and Lafayette College; and Erie, home to Gannon University and Edinboro University.

In Michigan, several counties including Saginaw County, home to Saginaw Valley State University backed the Democratic candidate during this election cycle. And in Arizona—a state that hasn’t voted blue since 1996—the most populous county in the state, Maricopa County, where Arizona State University is located, also switched blue.

Other counties with colleges in them revealed a massive Democratic trend including in three of Georgia’s counties: Gwinnett, Cobb and Cherokee. With college voter data also comes youth turnout data, which showed that between 50 percent and 52 percent of eligible voters under the age of thirty cast a ballot in this year’s election based on votes counted by Nov. 9, according to an analysis by the Center for Information and Research on Civic Learning and Engagement at Tufts University. This is roughly a 6 to 10 percent increase in youth voter turnout compared to the same time in 2016.

CIRCLE’s data also indicated that young people between the ages of eighteen and twenty-nine backed the Biden-Harris ticket by a significant margin, 61 percent to Trump’s 36 percent, and young people of color were more likely to back the former vice president.

“Young voters are much more Democratic than older voters,” Fortier said. “This difference between the generations has been noticeable since 2004.”

But Fortier cautioned that youth voter turnout may not be the “key” reason for Biden’s victory, as it’s difficult to formally declare the statement without more post-election surveys, voter file information and final election numbers in crucial counties, he said.

“Youth turnout . . . is typically the lowest among all of the age groups,” Fortier added, referring to those between the ages of eighteen and twenty-nine.

With roughly two months until Inauguration Day, all ballots still haven’t been counted, as 160 million Americans voted and Trump ignited a series of litigation battles contesting the election results.